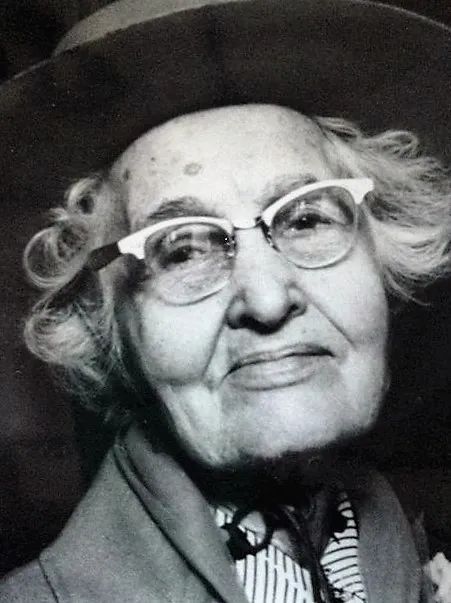 Hattie Maria (Webb) Dear was born to Nathanial Webb and Florence (Bushnell) Webb of St. Peter’s Mission, Montana on August 12, 1889. She was born on her parents’ homestead in a one-room log cabin with a dirt floor. A Blackfoot Indian mid-wife assisted at her birthing.

Hattie’s mother, Florence Bushnell was born in Seward Nebraska in 1871 and came to Bozeman as a child with her parents on a wagon train. Florence’s father, W.H. Bushnell had fought in the Civil War and decided to move his family West. Hattie’s father, Nathaniel Webb was born in Prentiss, Maine in 1859. He came to Montana in 1881. Nathaniel and Florence Bushnell were married at Sourdough Creek in 1887 and they went to the Birdtail country the same year and took up a homestead.

During Hattie’s school years, she attended country school at Sullivan Valley and Saint Peter’s Mission. She was eight years old when she started school because she needed to ride horseback six miles round trip. It seemed longer because she had to open a half dozen wire gates along the way. Many times the mare she rode would have a baby colt at her side. Hattie helped her father with the chores on the ranch before and after school milking cows, churning butter and feeding the livestock.

In 1906, when Hattie was 17, her father decided to lease his Montana ranch and take the family, cattle and horses to High River, Canada, which he heard was wonderful grass country. Being a good horsewoman, Hattie alternated between riding horseback and driving a team and wagon. As was the fashion of the day, she rode sidesaddle.

Their little wagon train reached Browning, Montana by July 4th and they camped on the outskirts of town that night. Hattie and her family were able to observe skyrockets and hear firecrackers as the Fourth of July was being celebrated. They crossed into Canada on July 9, 1906. That winter was extremely harsh and they lost several head of cattle.

In May of 1908, Hattie’s father made arrangements to move back to Montana. He sold the remaining mother cows with calves at their sides for twenty dollars a head and bought Clydesdale horses to raise and sell. Hattie had the responsibility of driving the new horses south along with some strays that had been acquired. She almost lost her life herding them through a deep swift current on the Milk River.

Back in Montana Hattie hired out to a neighbor whose wife had just had a baby. For the wage of $15 a month she did all the cooking, cleaning and helped with the outdoor chores. When the job ended she got work doing the same work but making $20 a month.

While living in Canada, Hattie had made the acquaintance of her future husband, and on March 24, 1909, she married Alfred Henry “Harry” Dear in Great Falls, Montana. Right after the ceremony, the Dears boarded a train for Minot, North Dakota where he was engaged in the horse-trading business.

The following year Harry & Hattie returned to Montana and homesteaded near her parents’ ranch where they lived in a one-room shack. They bought milk cows and sold the cream as well as eggs. Their daughter, Alice and son Fred, were born on the same homestead and the same Indian mid-wife who had brought her into the world attended Hattie.

In 1915 they purchased a ranch on the Birdtail along the Mullan Trail. The ranch had been used as a stage stop at one time.

On several occasions, Hattie was witness to large bands of Indians heading down the Mullan Trail. They rode by without looking at her.

In 1917 a third child, Douglas, was born in Cascade in a tiny hospital housed over the Pastime Theater. By 1924 when her fourth child, David, was born, Hattie went to Great Falls where he was born in a hospital.

During the years they lived on the ranch at the Birdtail, Hattie milked cows twice a day and sold the cream to the Cascade Creamery. Hattie and her husband ran the Birdtail Post Office from 1915 until 1921 and Hattie took in boarders when the Fort Benton Stage Road was being constructed on the Mullan Trail.

When her daughter started school, Harry drove her some 19 miles into Simms each day. Hattie would take her infant son and spend the day in the saddle herding their sheep to keep the coyotes away.

Hattie was a good hand with a team and buggy, but she also learned to drive a Model T Ford. Some times on a cold morning, the Model T wouldn’t start. Harry would saddle up Hattie’s old mare and drove while she pulled him with the horse. Hattie’s horse would buck as she was pulling the car, but somehow they managed to get it started.

In 1921 they moved into Simms to send the children to school. They moved back to their ranch in 1926 and Hattie continued to live there after Harry’s death in 1950. Her horse Pal died in 1959 and it was at that time that she decided to retire from the ranch and move into Cascade.

Hattie’s love of poetry ranked with her fondness for horses and the outdoors and in 1976 at the age of 87, she rode horseback in the celebration parade that Cascade held for the nation’s Bicentennial.

In 1977 the Montana Cowgirls Association nominated Hattie for, and she was selected to receive the Heritage Award, bestowed upon outstanding pioneer women by the Cowboy Hall of Fame in Oklahoma City.

Hattie saw it all: from the days of riding sidesaddle, driving a team and buggy and Model T Ford, to riding on a jet airliner.