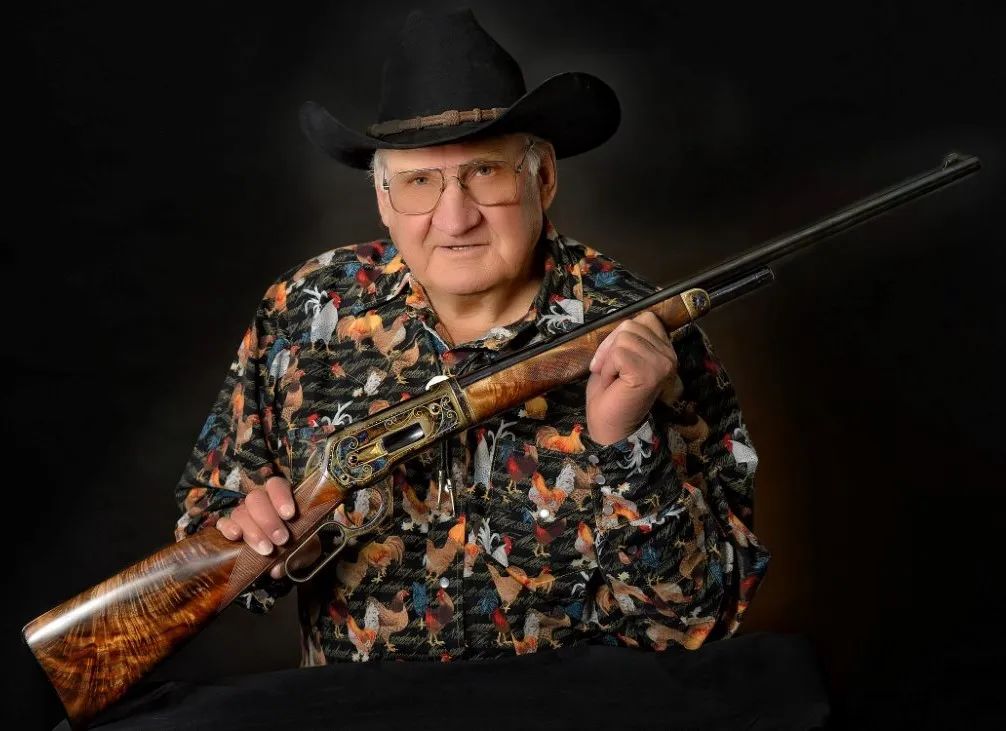 Cowboy, rancher, saddle bronc rider, artist, knife maker, gunsmith, husband, dad, Papa Duke, friend, partner and all-around good guy, Aaron “Duke” Pursley is a multi-faceted diamond in the rough. This man, who was born in his grandparents’ home at the foothills of the Bear Paw Mountains, a short distance from Big Sandy, Montana, has a rare talent.

Duke was born in 1935 to James and Mildred (Rickert) Pursley. His dad had come to the area in 1928 from North Dakota and worked as a ranch hand and coal miner. Jim established his own ranch in the 1940s on Coalmine Road. The ranch included land purchased from Mildred’s parents. Jim and Mildred ran cattle, had milk cows and horses, and raised hay, wheat and barley. Duke and his older brother, Allan, grew up with a respect for the land, the people, and the Code of the West.

From his youth, Duke loved the challenge of seemingly unrideable broncs and had passion for breaking horses. He entered his first rodeo in 1954, shortly after graduating from Big Sandy High School. He rode saddle bronc at the Havre, Montana, rodeo, performing quite well. Rodeo became Duke’s way of life for the next 14 years. A flamboyant, stylish rider, he scored high on the rough stock of the day. While rodeoing, he also worked on the family ranch and dabbled in numerous artistic avenues. After a short stint of amateur rodeos, Duke gained a Professional Rodeo Circuit Association card and rode saddle broncs throughout the West and in Alberta, Canada. In summer 1955, Duke rode every night at West Yellowstone, performing for the summer tourists. In 1961, he won the Alberta, Canada, circuit and was on his way to qualifying for the National Finals Rodeo when a saddle bronc in Sidney, Iowa, fell with him and crushed his femur. He never exactly regained his carefree riding style but went down the road with the best of them for another seven years.

During his rodeo days, Duke married Dolly McNeill who was raised on the McNeill Ranch in the Bear Paws, 60 miles from Big Sandy. Dolly also graduated from Big Sandy High and, lucky for Duke, she had been to nursing school, was a great cook, and enjoyed traveling down the road to rodeos in a pickup and camper. They started their family during those years. Sons, Mike and Kip, and daughter, Julie, spent their early years traveling, too, learning from the rodeo family and watching their dad ride.

Duke retired from rodeo about the time Mike started school, and he worked full time with his dad. The Pursley’s welcomed a third son, Ted, in 1970. That year, with the help of family and friends, the Pursley’s built the log home they still live in today at the base of Mount Centennial on land that they purchased from Duke’s uncle, Milton Pursley. The land and cattle kept Duke busy, but kids were expensive, so he added to the family income by trapping beaver, building fur caps, raising mink, and honing his talents.

Duke was blessed with artistic talents from both his parents. As a master engraver, Duke creates exquisite scroll and design work, animals, scenes and even portraits on pistols, knives, and rifles.

Duke began engraving when he was around 20. He had always been a gun enthusiast and intrigued with the beautiful engravings he saw on pistols. He could draw beautiful scrolls. His dad built him his first chasing hammer and gravers to engrave those scrolls. His tools have been refined since those days, but he remains resourceful.

He engraved a handful of pistols in those early years. In 1975, he was inspired by a custom knife maker/engraver to build and engrave his own style of pocket knives. The Great Falls Tribune of February 23, 1986, says, “within a few years he had gained master craftsman and artisan status. He was soon appearing in such prestigious events as the New York Knife Show, Anaheim Knife Show and Las Vegas Gun and Knife Show.” He has created and engraved a couple hundred custom knives. Priscilla Presley and Peter Fonda are among his famous customers.

In the April 1991 issue of Gentleman’s Quarterly, Stephen H. Foreman, wrote, “Pocket-size Treasure knife maker Aaron Pursley transforms an object of utility into a thing of grace. ... He marries exotic wood to fine metal, and he engraves lacy scroll work on the blade and the bolsters with Lilliputian tools.”

Duke next created a rifle. In 1996, Duke and partner, Ron Otto, founded the Little Sharps Rifle Company to create a 20%-smaller version of the original Sharps rifle. The Lil’ Reliable is manufactured in 11 different calibers, and Duke engraves each rifle.

Duke has always been generous with his gift, donating numerous original engraved pieces to be auctioned or raffled in fundraisers and mentoring beginning engravers, knife makers and children.

Duke, now in his 80s, continues to engrave. He gained master engraver status in the Firearms Engravers Guild of America, in the early 1990s, and the FEGA website says Duke is one of only 45 master engravers in the U.S. Duke has contributed to beauty in this world. When you receive something from an artist, you gain a piece of the artist’s heart, soul and life. Duke’s art is his life.