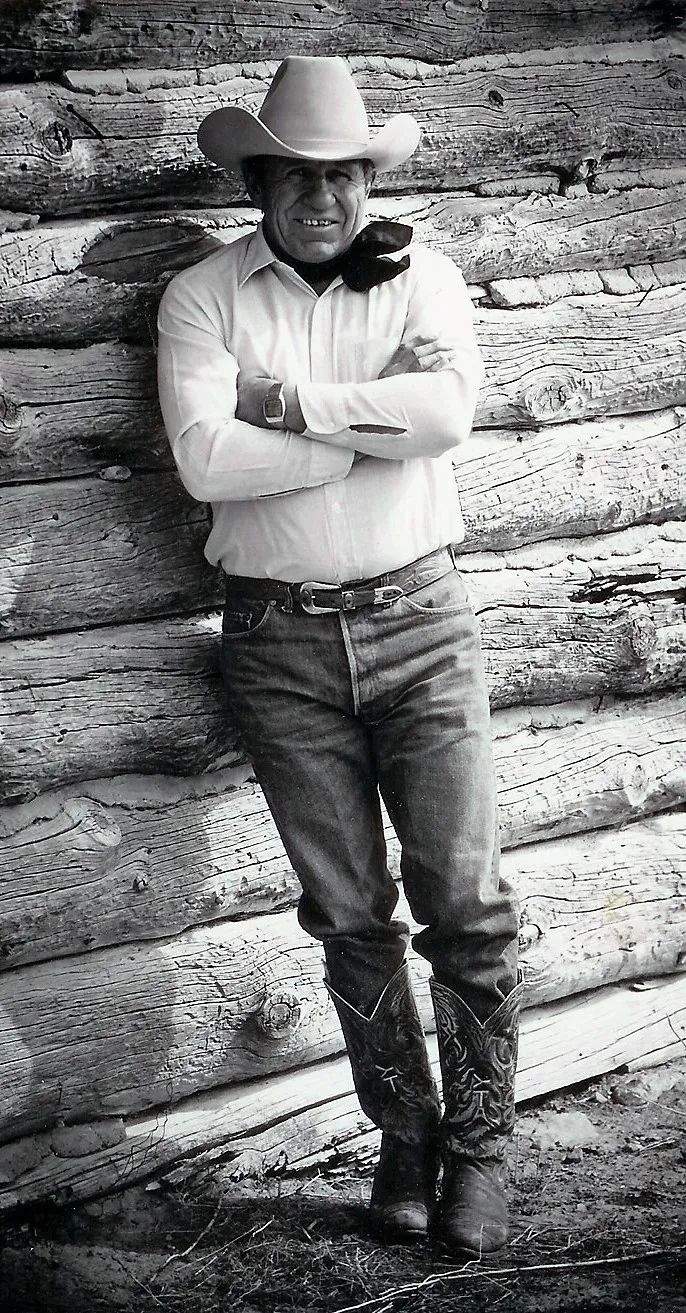 William Jr. “Chuck” Hubing was born September 7, 1924 in Glendive Montana, the son of Will & Daisy (Croatt) Hubing. He joined brothers Lee and Greg and sister Lucille. The family had come to Montana from Wisconsin in the early 1900’s and homesteaded in the Brockway area before moving to Terry. Chuck spent his early years traveling “the North side” with his father buying cattle and horses. He was fortunate to live in a time and place where the country was wide open and full of horses. Chuck loved taking part in some of the big horse round-ups that occurred in eastern Montana. Chuck became acquainted with many of the tough, old time cowboys of the era and spent time riding and camping with them as they worked the range. “I never went to High School,” Chuck says, “I went to ranching after the eighth grade.”

As a young man, he worked at various jobs to get enough money to put together a few cows of his own and has been in the cattle business ever since. He tells stories of riding horseback the 35 miles from Terry to Big Sheep Mountain, staying in a dugout shack in the dead of winter to feed cattle.

He and Marjorie Chapman were married in 1947 and started their family on the north side of the Yellowstone River. Their girls, Diane, Sharon and Judy learned to be ranch hands at a very young age. Acquiring a few cows, and with friend Gayle Taylor the Midway Bar, Chuck continued to expand. With expansion of his operations, he was able to bring on hired men to help with the workload. For several years, he and boyhood friend, Art Reukauf, bought and leased land around eastern Montana and western North Dakota to run their livestock.

In the late 60’s and early 70’s Chuck was involved in a cattle operation called the Big 10. The Big 10 was a group from eastern Montana who bought ranches in the Australian Outback along the Fitzroy River and also near Alice Springs. As part of the Big 10, Chuck traveled to Australia several times. Chuck’s travels took him around the world. A few years ago, he traveled to Europe visiting ten countries in 15 days. Stepping out of a Paris hotel or walking to coffee in Tehran, Iran in cowboy hat and boots makes a person stand out in the crowd. But for Chuck no place was as good as Eastern Montana in any season.

Chuck hired many men over the years and turned them into cowboys. When they got done working for Chuck, they had a thorough understanding of cattle, horses, haying, some farming and stewardship of the land. He also instilled in them an appreciation for the Big Sky country, nature and wildlife, except prairie dogs. It has been said that Marine boot camp was easy after working for Chuck. Those who have ridden with him understand the true meaning of “burning daylight” and earning your pay daylight to dark. Chuck has been heard to say when someone was bucked off a horse “Get back on before you ruin that horse” and his girls mimic “If there is no blood you are not hurt.”

The ability to change with the times also helped. Chuck started trailing cattle for many miles from one rangeland to new leased ground. Later he bought his own semi to move the cattle by truck. On the first trip to the ranch, loose gravel on a turn at Cherry Creek pulled the rig onto its side peeling the roof off the trailer like a sardine can. From then on the Hubing cattle rode “open air.”

In 1969 Chuck and Charlotte (Perkins) Hubing leased their ranch south of Broadus, Montana on the Little Powder River. They purchased the property in 1974. When they first bought the ranch, there was no development, and very few reservoirs. Along the Little Powder River were artesian wells and very little hay ground due to deadfall cottonwoods and old growth sagebrush. Over the years the Hubing’s took pride in transforming seven miles of river bottoms into hay grounds and winter grounds. They cross-fenced to improve grazing, established a 3000-acre wheat allotment and cleared sagebrush flats. They restored native grasses to the land thereby helping the good grass country increase productivity. Improving and taking care of the land so it can provide for livestock has always has the ultimate rancher’s goal for Chuck and Charlotte.

When they bought the ranch, they had 800 bred heifers and continued to develop the ranch along with improving the cattle bloodlines by developing strong, healthy, independent cows that could calve alone. Cattle buyers vied for the Hubings’ heifers to improve cattle sales and provide high quality heifers for breeding stock. Some neighbors would buy a few of the Hubing bull calves before branding to improve their “seed” stock.

As a young man, Chuck broke horses to ride, which led him to rodeoing. This was the start of the broken bones. He shattered his ankle in several pieces and it never healed correctly giving Chuck his distinct gait and great dancing ability. It was inevitable that he continued to abuse his body as is typical of ranching life. “If you have never been bucked off, you haven’t been riding enough horses” was the thought process of many old cowboys of his era. When he was older, he would “ride” water on a ATV, which also bucked him off. He has broken so many bones over his lifetime that doctors would use Chuck’s x-rays to shock medical students because he is known as a medical marvel.

Chuck won the Cowboy of the Year Award for Powder River County at age 88, the same the year he sold the ranch. Chuck may have retired from ranching, but he is always interested in the cattle business as it hasn’t stopped him from keeping up on stock prices and looking at cattle.