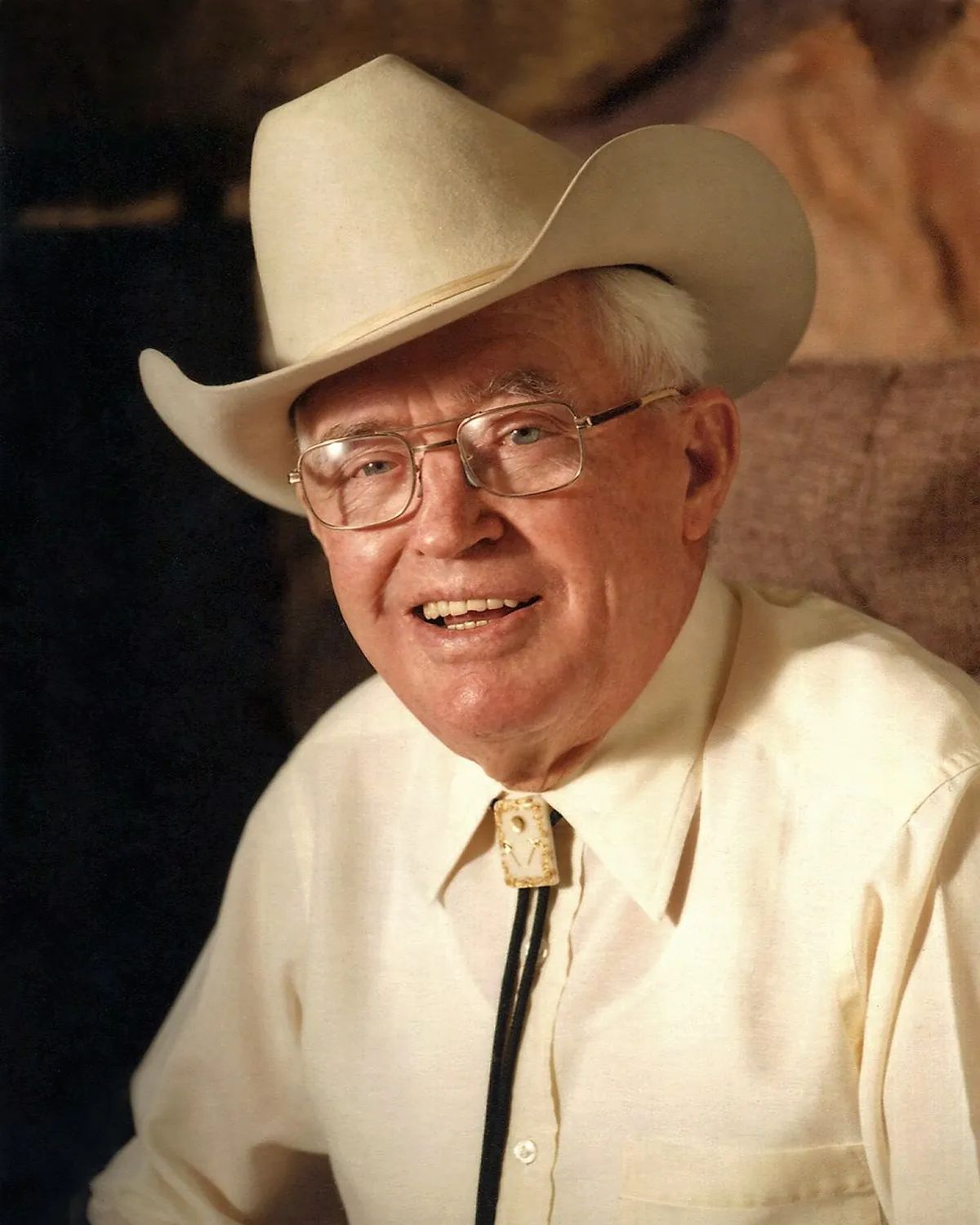 It’s a long way from Lampasas County, Texas to Montana on the back of a horse, an old-timer once told Bill Brown, Sr. “I’d have to believe he is right”, Brown once commented with a hint of a Texas drawl.

William James Brown of Sand Springs, Montana heard those Texas trail stories firsthand as a child, and they eventually drew him north from Texas in 1917 on a train with his uncle Jim. The oldest of 9 children, Bill left home young, and was not yet 16 when he first rode into Sheridan, Wyoming, with no more than a 5th grade education.

One can visualize an orphan-looking wrangler clomping down the booming metropolis of Sheridan, Wyoming looking for work. He arrived in Sheridan with nothing more than a saddle, a bedroll and his “goods” box.

The young man applied for a job with Fred Givens, manager of Spear Cattle Company that had owned over 50,000 head of cattle at one time. Bill claimed he was hired immediately because many of the grown men in the country were off fighting in the war.

The young hand didn’t make excuses for his age very long. He was offered $45 a month, “a kid’s wages”, but before the first payday he had proven his rawhiding abilities enough to earn $75 like the rest of the men. That was the beginning of a forty-year partnership, and a lifetime in the cattle business for a man who readily converted to the northern lifestyle.

Bill would say, “I will tell you what makes a man successful: DE-TERMIN-ATION, and anyone who starves to death is lazy!”

Bill worked off and on with what later became the Spear-Faddis Cattle Company for four decades, until he eventually owned half of the business. After a few years of employment, Bill left the outfit to go back to Texas for a time to help his “trader” father, who owned a meat market in Lampasas. Texas could not hold him though, and it was not long until he was back north to stay.

Bill prided himself on his negotiating skill on making any kind of bargain. With his knowledge of trading livestock from his time in Texas, he once bought some loose Montana hogs in 1927 for $400, and sold them that fall for $2500. With this money, he bought his first new car and a set of cows, and married Elizabeth McQueen, who soon became the mother of his two children, William James, Jr. and Betty Jean.

Bill and Beth purchased a place on the Little Big Horn River, near Wyola, Montana but it was a tough time to be in the cow business. By 1933 he was broke and back to work at the Spear- Faddis ranch, although by now the company had also re-organized to Faddis-Kennedy.

In 1935 Bill defied the rules and again bought cattle of his own, telling the bosses that he wasn’t going to work for nothing and “you can get yourself another man if you think I am going to work here for just wages”. Faddis and Kennedy agreed to keep him on, but told him not to get too big, to which Bill replied, “Well, I am going to get as big as I can, as fast as I can, and you tell me when you want me to leave.”

In 1942 Bill went to the men and said he was quitting. When asked why, Bill said “because you told me not to get too big and I already am too big. Instead of firing him, Kennedy made him a partner, in a partnership that lasted 17 years.

Bill owned 49% of the re-organized Brown-Kennedy Cattle Company and Kennedy owned 51%. From the time the business was formed in 1942, Brown-Kennedy doubled their size by buying and stocking ranches. Often it was Kennedy’s money that bought them and Brown’s cattle that stocked them.

Most deals were approved and shared by both partners, but one time Billed leased a ranch near Douglas, Wyoming and Porter Kennedy wasn’t interested in the deal. Bill bought steers from Mexico to stock it, and at shipping time Bill profited a cool $100,000. Kennedy, felt he was entitled to half. This brought some tension to the partnership. Bill was anxious to grow, and was just too aggressive for the more conservative Kennedy.

In 1959, the two partners decided to part company. They mutually agreed on a cash value for a half interest in the company, and after shipping at the Moorcroft stockyards, they tossed a coin to see who would get to decide whether to buy or sell the property that they had built together. Bill lost that toss. Porter Kennedy decided to buy, and Bill was now in the market for a new ranch.

Bill’s wife Beth was very active, serving a year as State President of Wyoming Cow-Belles, but became ill and died in 1960. A month later, Bill and his son, Bill, Jr. and wife Ann, purchased a pair of ranches west of Sand Springs, Montana. This was very hard move for Bill, still grieving the loss of this wife, and now leaving the ranch in Wyoming where he had worked so long. They arrived on Calf Creek on April 1st. Ten days later the lives of his only daughter and her two children were tragically taken by her husband. Most men his age would have been crushed, probably causing them to think about retirement, but for Bill that was never an option. Once again, he recovered from the adversity that confronted him.

Bill liked to run big herds of several hundred yearlings and even two-year-old steers on leased grass, which meant leasing pasture on over a dozen different ranches in Eastern Montana through the years. He and Bill, Jr., started a 300-head registered Beau Donald Hereford herd when he could not find bulls like he wanted. They sold two-year-old bulls for many years at their annual production sale at Lewistown Livestock Auction.

Bill was still horseback dragging calves at the LO Bar brandings when he was 83 years old. He enjoyed over 30 years of marriage with his second wife Beulah at the Sand Springs ranch until he passed away in 1992 at the age of 90.

Bill Brown, Sr., always loved Hereford cattle and his family says that if he could, he would most likely tell them today that they should have stayed with Herefords instead of the Black Angus and baldy cattle they run today.

The LO Cattle Company is still in the family, with Bill Sr.’s grandson Taylor and his wife Shannon purchasing it from their siblings Martha, Beth Ann, and Reeves. Great-Grandson Travis and his wife Mary Brown work the ranch today, and when their son Boedy arrived in November 2014, such marked the 5th generation on the Brown ranch.