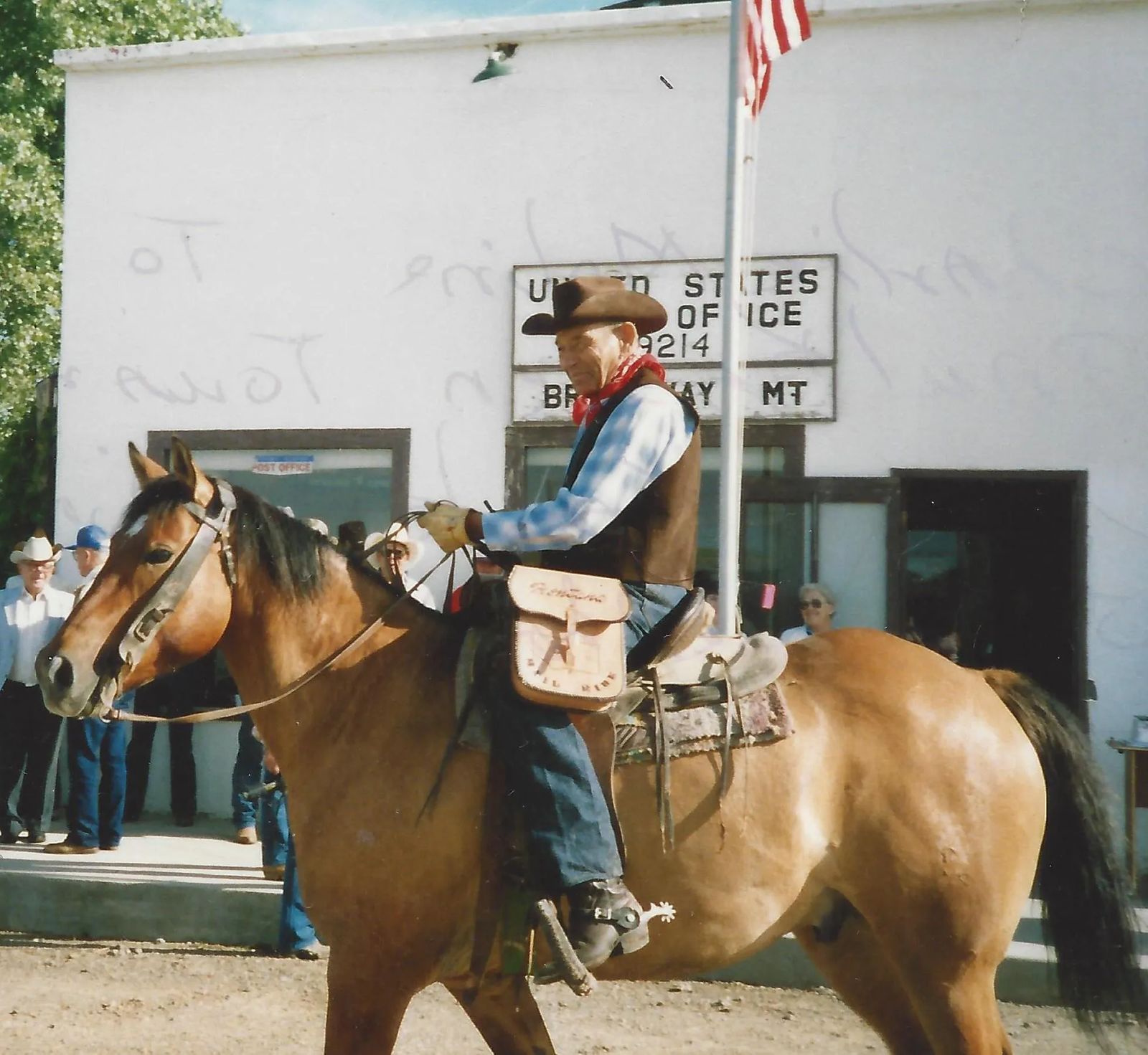 Paul was born at Hazel, Montana near Big Sheep Mountain June 24, 1919 to Frank C. R. and Katherine (Hatzenbuehler) Kasten. At a very young age he was good with livestock, especially horses. A picture of Paul (age 13) in 1932 breaking native sod on his dad’s place with a four-horse hitch and two bottom plow made it into the Ag Almanac in 1998.

The following is in Paul’s own words from the Kasten Family reunion book:

“I was born June 1919 on my parent’s homestead north of Big Sheep Mountain. Mrs. Samuel Grimes was the nurse when I was born. Our address then was Hazel, Montana (located north of present day Terry, Montana). My folks later moved to the community of Watkins, Montana, settling on the section that Scotty Dunlap and Glen Ingram homesteaded.

“I started school in the fall of 1925 in the Gackle School that was built that summer. At that time a school term was only eight months which suited me fine, ‘cause I never did care for school. Whenever I had a chance to stay out I would do so. Some springs I’d miss two to three weeks to help my Dad put in the crop with horses. In the spring of 1929, Bill Mackin came over and asked dad if he could hire me to help with the juggers and herd a small bunch of ewes and lambs for a few days. At first Dad, didn’t want me to go; he said I was too young. I gged to go cause I wanted to get a job and make my own money. I finally got his consent. The next morning early, I got on a saddle horse, rode three and one half miles across country and got there for breakfast. I can well rememr I worked like a trooper. When Bill or Mary would ask me to do something I’d do it on the run. I would ride home every other night to keep from getting homesick. When Bill paid me off my check was $7.50 which made me feel like a millionaire. I got 50 cents a day when I herded the small bunch and 75 cents a day when I herded the big bunch. I sorta took to lambing and only missed four lambing seasons since. The sheepmen I lamd and herded for were Ray Jones, L.R. Jordan and sons, John Schlinker, Horkstrom Bros., Bob Price, Fred Pierce, Crow Rock Sheep Co., Scotty Dunlap, Tolleif Hinnaland and Dan Hinnaland.”

“In Septemr of 1942, I bought a quarter of a section of land near Watkins, Montana from my brother, Alrt, who had enlisted in the U.S. Army Air Force.”

“In April 1947 I got the contract to carry mail out of the Watkins Post Office. This route was consolidated with Brockway in 1958.”

“The winter I especially recall is 1948 and 1949. I hauled mail six weeks straight either with a team or saddle horse. The snow was so deep when hauling with the team; I’d take along a throw rope in order to get my sled across the coulee, southwest of the Harvey Hedstrom place without breaking the pole while going across country to Reinholt Naasz. This route was 42 miles’ roundtrip. I would leave Watkins in the morning early as possible, going as far as David Schlinker’s and spend the night there. David and Marvel’s hospitality will never forgotten, Dave giving my horses the st of care and Marvel with the good food and lodging. Other patrons who showed their kind deeds and favors will also rememred.”

Paul ranched all his life and faithfully served the patrons along the Brockway, Paris, Watkins and Flowing Wells rural mail route loop for 57 years. Many times, he went above and beyond the call of duty delivering groceries and other necessary items to the people on his route. The kids will always remember the candy he gave them every time he brought the mail.

During the terrible winter of 1948-1949, Paul’s mail route was the only one that functioned in the deep snow and bitter cold. All the other mail routes required emergency air lifts to get essential items to those stranded. In 2006, the United States Congress honored Paul by designating the Brockway Post Office as the “Paul Kasten Post Office Building”.

Paul ran mainly Hereford or Hereford cross cattle right up until his second stroke forced him to retire. Nearly two years later, on December 24, 2007, he went to help take care of the Lord’s lambs and horses.