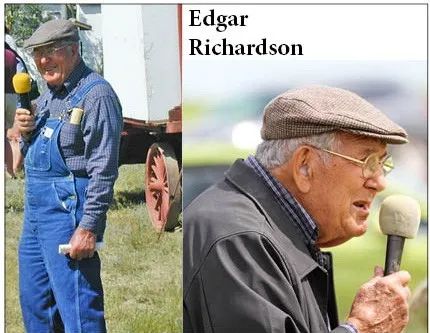 Edgar Richardson, of Scobey, Montana loves history, but especially the history of northeastern Montana and Daniels County. Preserving this history has been a hobby he has pursued with enthusiasm and dedication. He is an active member of the Daniels County Museum Association serving for over 50 years now. For several years he searched for historic buildings and helped move them to Pioneer Town on the outskirts of Scobey. Pioneer Town now has well over 50 historical buildings making it a destination point for Montana tourism. In addition to the buildings, hundreds of historical artifacts, especially farm and ranch equipment make their home there.

Edgar was born in 1927 and still remembers the first six years of his life living with his parents in a two-room fourteen by twenty sod house - one room was the kitchen, dining and living room and the other the bedroom. The walls were plastered on the inside - warm in the winter and cool in the summer. The soddy was built northwest of Scobey at Carbert near the Canadian border by his grandfather, Samuel Richardson. Sam was considered an expert at sod construction, which was a practical method on the treeless prairies saving long hauls to get lumber. He claims to be the youngest person who currently lives in the county that actually has ever lived in a sod house. Like other children of his era, Edgar remembers ice on the water pail on winter mornings and dressing while sitting on the oven door of the Majestic range to keep warm. “In the evenings we would listen to the Airline radio until the battery would go dead,” he recalls. “We had a six-volt battery with a wind charger. My dad took a 2x6 and whittled out a propeller to run it. If there was no wind to run the charger we had no radio in the evenings.” “We went two miles to the Carbert store for mail and groceries once or twice a week and got to Scobey only once or twice a year. We did most of our shopping from catalogs.” The sod school house had been replaced by a wood frame building by the time Edgar was old enough for school. At first he rode to school with an older cousin. After she graduated he drove back and forth in a one-horse cart. “Most of the students and teachers were my relatives,” he recalls. “My most vivid memory was of the time all the Richardson relatives got together to buy me a bike. We went through some tough times in the 30’s and my parents didn’t have the money to buy one for me. That bike is almost 80 years old now and I still have it and also the list of relatives who bought it for me.”

As a boy, Edgar traveled with his grandfather in his Model T truck while he made veterinary calls. The elder Richardson was not a licensed veterinarian, but was skillful at doctoring animals, and received calls from miles around for his services. “One time I went with him on a call across the Canadian border. In those days you could cross the border without going through customs. This time the patient was a man who had dislocated his shoulder when the horse pulling his stone boat lurched. The man was in a lot of misery when we got there. My grandfather made a sling out of a dishtowel and put it on the guy’s arm. That man lived to be old, and he never had any more trouble with that arm,” Edgar remembers.

Edgar spent the summer of 1934 living in a tent at the Fort Peck Dam where his father was employed as a carpenter’s helper building the workers barracks. “That summer President Franklin Roosevelt came to inspect the project,” Edgar recalls. “He drove up in a white car without a top and then he got on the train and made a speech from the back platform. My grandfather and I stood just a few feet away from him while he spoke. I was only seven years old but I remember it clearly.”

Edgar also remembers stacking thistles for the cows’ winter feed during the drought of the Dirty 30’s. In 1937 he and his family moved to Scobey, where he graduated from high school in 1945. In 1948 he worked in Scobey as a plumber and electrician’s helper and in 1949 he began working at Conboy’s Bar (renamed Clint & Charley’s) which was owned by his father and uncle. In 1950 he married Geraldine “Gerry” Gilbert and began raising a family. In 1954 he purchased his first farm land in Canada and bought Uncle Clint’s share of Clint and Charley’s in 1956. They renamed it the Ponderosa and in 1972 they sold it to their daughter and son-in-law Kathy and Rocky Ware. In 1969 he and Gerry purchased the Rex Theater and Riv-R-View Drive In. They moved the Rex Theatre to the Pioneer Town in 1971 to make room for a new bank building and built the Cinema Center that spring. In 2013 Edgar gifted the Cinema Center back to the Scobey community and it is now known as Richardson Theatre and is operated by community volunteers. Edgar notes a trend in movie audiences, “It’s the good, clean family movies that get the biggest crowds, “he says.”

For many years now, and since those earlier times, Edgar Richardson has had a successful career in varied business activities while also becoming one of the most outstanding, intelligent, diligent and energetic civic workers in the community, unceasingly working and improving the elements around him. He also is a history buff, whose efforts continue to spearhead or help in preserving and improving historical artifacts, buildings and institutions in Scobey and the surrounding area. Namely Pioneer Town, the Scobey Saddle Club, organizing the first swim meet at Roseland Park (in 1961 with the Jaycees), improving and organizing the airport (himself a pilot) commission, a volunteer fireman for 21 years, a charter member of the credit committee of the Daniels Sheridan Federal Credit Union. Despite family tragedies, including the sudden death of his first wife, Gerry, in 1984, proceeded by the long hospitalization of his dad years ago Edgar continued to make a difference in his community. In 1986 he married earlier widowed Mary Girard Hanrahan and encouraged her to be an active local history archivist at the Daniels County Museum grounds. Edgar is a member of the local Veterans of Foreign Wars, served in the United State Navy visiting 41 countries. He served diligently with the Scobey Color Guard for 23 years, a volunteer group that is outstanding for uniformed appearances at military funerals and parade occasions. “I love doing these things,” he says, “I don’t ever want to retire. I want to go out with my wheels spinning!”