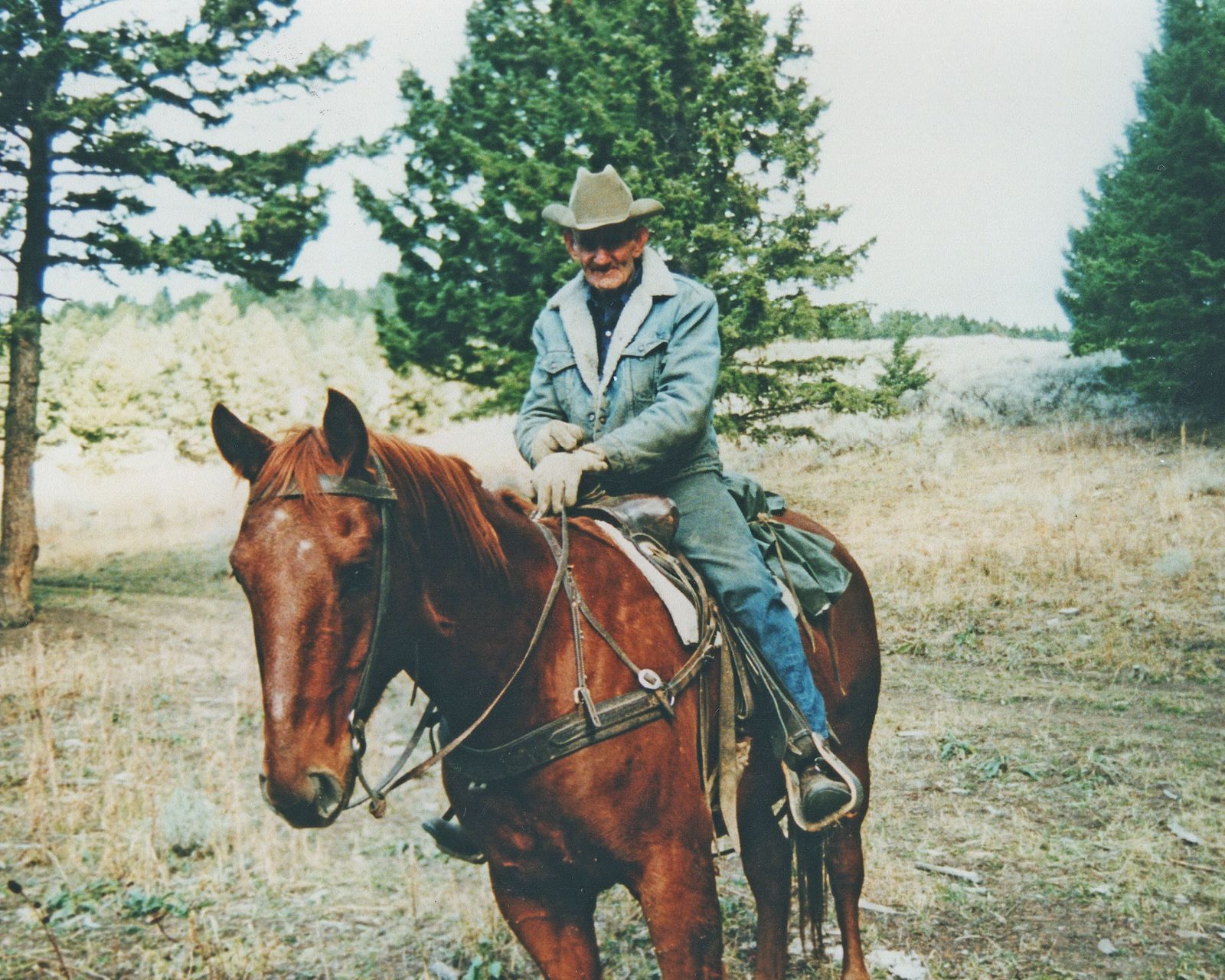 Life time resident, Thomas Royal "Tom" Hunter, was born September 25, 1910, in Livingston, Park County, Montana the son of Guy and Mary (Francis) Hunter. He lived with his parents on their ranch three miles northeast of Clyde Park, Montana for about three years. The family then moved to Green Mountain near Sedan, Montana in Gallatin County. His parents separated soon after and his father moved to Spirit River in Canada. His mother moved the family to Chadbourne, a small village north of Livingston where they lived with her parents, Henry and Sarah "Sally" Francis. He attended the Cowan School until the 7th grade and maintained a perfect attendance record. With the exception of the three years Tom worked with a Biological Survey Crew in Idaho he lived in the Shields River Valley and Sedan area all his life, an area he truly loved.

Tom was not a big man; he stood 5' 11", had a slim build, big hands and a big heart. He was an “old school” cowboy all of his life. At an early age he started breaking horses and instilled his love for a good horse, all animals, ranching and rodeo in all those close to him.

Bill Gibson, a family friend that went to school with Tom, remarked "Tom always had a rope in his hand and a horse to ride. He never believed in walking if the horse was catchable and he could find a string to guide it with”. Tom never cared if they bucked or ran, he stayed with them. When he was about 18, he happened to be riding into Ferry Lake and tried to rope a guy driving a Model A. Missed the guy and caught the choke and throttle levers on the column, causing the car to go really fast. He was tied solid to the saddle horn. Everyone survived the wreck and still to this day it makes for a lively family memory.

In 1930, he bought the livestock brand Bar over N reversed E from John Nickelson. This brand was first recorded in Montana by W. B. Larkin of Livingston in 1918. The brand was used on the left rib for cattle and left shoulder for horses on the Hunter Ranch until 1995 and is now owned by his daughters, Carol, Margery and Suzanne. They have retired the brand from use.

On July 28, 1934, Tom married Nancy "Betty" McHenry in Bozeman. Since Betty was too young to marry, Tom made the trip for the license. They worked for Tom’s uncle, Charlie Francis at Elton, Montana. It was just a whistle stop on the railroad. They then moved to the Dahl place, east of Livingston. Tom recalled helping drill an oil well that was never proved up on while working there.

In 1937, Tom and Betty purchased the family ranch located on Lower Cottonwood Creek, located north of Clyde Park. There they ranched for 55 years, raised their five children, Carol, Mary, Margery, Thomas and Suzanne and enjoyed their many grandchildren. Their door was always open to family or friends who were down on their luck or just needed a place to be for a while. Over the years Tom and Betty purchased two and one-half sections of land scattered in Park and Gallatin Counties and Tom always looked forward the new calf crop and getting the cows to green grass. Getting the cows to summer pasture was always an event. It took an afternoon on the first day to trail the cows to the first set of corrals and then another day and a half to drive the cattle on to Sedan where the summer pasture was. Tom made the trip a horse back every year, including the year he passed away. He never had a problem getting cowboys to help, especially after the grandkids got old enough to sit on a horse because making that trip with Tom was about as western as it gets. The grandkids share memories of riding until they could hardly walk, throwing loops heeling calves until their arm about fell off, camping overnight and sleeping in the back of the pickup, swapping lies, playing poker half the night (Tom cheated) and learning to "curse like a mule skinner” because Tom couldn't hear too well. (But Betty could, so if she was close by you needed to watch your mouth). If Betty wasn’t in camp to fix breakfast or lunch and Tom was the cook, it usually meant Spam slapped between two pieces of bread because he loved Spam - not his crew’s favorite food.

Known as a hard worker and having lived through the depression, Tom’s self-reliance, ingenuity, determination and honesty were legendary while he never lived beyond his means. He became skilled as a welder, mechanic, logger, carpenter and whatever it took to make the "Snap" (ranch) run. He could take baling wire or twine and fix about anything. Things were measured "perzactly" with a wood stick and if it worked, it was “good enough” He built the family log home by skidding logs he cut on Ibex Mountain, which was about five miles northeast of the home place. He skidded the logs to the ranch with four head of work horses, and with the help of his wife and kids, he squared the logs on three sides on a homemade sawmill he had set up. The house he and Betty built in 1948-49 is still standing and now owned by daughter, Marge.

Tom raised Shorthorn cattle for many years before cross breeding with Angus and was a member of the American Shorthorn Association.

"Officials Confer at Billings Shorthorn Show for the annual Shorthorn Breeders Association", tell us that "Animals shown by Tom Hunter of Clyde Park and Rigler Brothers of Corwan Springs won the show portion of the event Thursday in the yards of the Billings Livestock Commission Co., Mrs. Lorene McCarthy, secretary, reported.” ”Tom Hunter had a pen of 20 steers consigned in the Shorthorn Livestock sale in Billings that averaged 436 pounds and sold to Brant for $40.25”. (Per head)

Some of the things Tom enjoyed where the early mornings, and often he could be seen out changing the irrigation water as the sun rose over the Crazy Mountains. Although always a cowboy at heart, Tom probably walked a couple thousand miles in irrigating boots because it was a job that needed done. His idea of a “vacation” was taking a day to take salt to the cows in summer pasture or riding the Sedan country in the fall gathering his cows for the trip back to the home place.

Tom’s life spanned an era of dramatic change - from horse and buggy, to electricity, to "high tech" microwaves, CB radios and satellite dish television. He always preferred home to being anywhere else and spent many enjoyable hours reminiscing with family and friends about the exciting times of his early years. He especially enjoyed sharing the story of a trip to the Calgary Stampede in Canada and sharing his life experiences with his grandchildren. His sense of humor and enjoyment of the simple things set an example for all that knew him. He was a role model by his actions and he exemplified all the good things that come to mind when one hears the term "Spirit of the Old West".

Tom never considered retirement. He worked the ranch until the day he passed away of natural causes at the home he built with his own hands September 21, 1992. He was 81 years old.

Betty passed away in Livingston, Montana, October 1, 1995, and both are buried in the Woosley family cemetery at Sedan, Montana west of Wilsall, Montana. Tom was truly one of a kind.