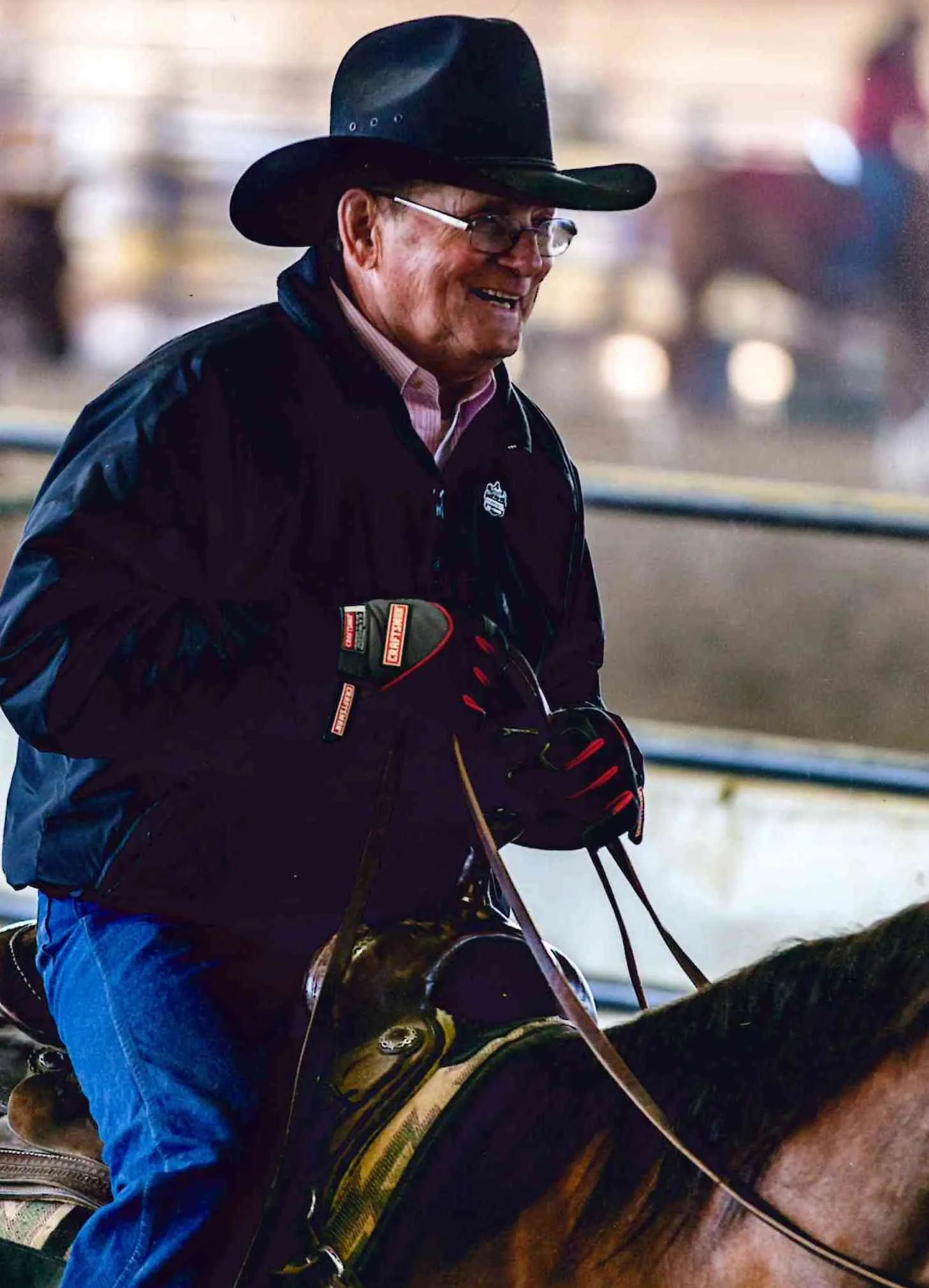 Joseph W. Enger was born August 5, 1944, in Langdon, North Dakota the first of six children, five infamous boys and one daughter. At age 16 Joe left North Dakota with a battered suitcase and his thumb; his mind made up to go to Montana and be a cowboy. After a year at various ranches he landed in Cascade, Montana at the Charles Hodson Ranch and remained there another 25 years, minus a couple stints working in Fort Shaw. Ultimately “Joe” became foreman on this 6,000 head cattle ranch stretching from Lingshire to Cascade and from Cascade to Jim Ball Basin above York. He raised his family there.

“Charlie” Hodson, of the Hodson Ranch, Elk Ridge Livestock and the Butte Livestock Auction, was like a father figure to Joe and taught him every aspect of a cowboy and a ranch. From a young age Joe was considered a hard worker and fearless horseman. Gathering wild horses, riding saddle broncs and moving cattle became his life. Nicknamed “Little Joe the Wrangler” he learned from some of the best, the old timers, by gathering wild horses in the Missouri Breaks with Horace Ratty, living in cow camps with Boyd Anderson and riding colts out of Printer’s Devil for Ray Jacobsen. Also, Arlo Ellison, cattle buyer and horse trader, often brought him race horses that didn’t make it on the track, to train as ranch horses. Two of the horses he owned and broke in the 1970’s went to the National Finals Rodeo. Hombre was Saddle Bronc of the Year and Queenie carried the American Flag. Joe is currently in his 70’s and still breaking colts.

In 1963, he married the love of his life and to quote him his “best hired hand”, Wanda Dugard, whose parents also worked on the Hodson Ranch. They had three children, Jason, Angie and Jodi and “raised them up” on the Hodson Ranch as the third generation to ride, brand calves and love the land.

Over the years, Joe has been an example of the generous spirit of the cowboy. He always went out of his way to help young men who needed a father figure or just a kick in the pants. He pulled them off the street and put them to work riding and branding. Many of them attribute their success today to Joe. He donated beef to the Future Farmers of America organization, served on the local school board and served as pickup man for the Little Britches Rodeo. Joe’s election as the youngest Director elected to the Montana Cowboys Association in Great Falls was just the beginning of his interest in the community and the ranching lifestyle. Joe founded the Cascade Youth Group Board in the late 70’s raising funds to buy roller skates for the kids in Cascade. While he is a true cowboy, many can attest to his roller skating and ice skating skills!

In 1984, Joe moved to Helena to work on the RV Ranch owned by James O’Connell. Joe helped promote Team penning events to raise money for families and organizations in need, He donated his time to Team Penning clinics to teach and promote horsemanship and working with cattle. Joe first began raising money through Team Penning and his close friendship with Tom Anders. When he heard about a toddler with a heart condition he organized the first of what would be many Helena Team Penning benefits for needy causes. They have raised money for the Veterans at Fort Harrison and for many families in need. After the deaths of his friends Tom and Trudy Anders, Joe was instrumental in setting up the Tom and Trudy Anders Memorial Penning. One of their many contributions over the years was to raise $20,000 for the Lewis & Clark County Fairgrounds. Joe would be the last to want to talk about his contributions, and as with other cowboy/rancher types, there are many we will never know about. Joe is currently serving another term on the Board of the Helena Team Penner’s Association and has served on various boards and committees ranging from the Montana Board of Livestock to being honored by the Helena Boy Scouts.

Joe and Wanda have seven grandchildren, Austin, Jake, Zachary, Thomas, Josh, Jojo and Ellery. These grandchildren worship their gruff, honest and hardworking “Papa” and know that if you get a chance to go move cattle, it means no whining, no complaining and no getting off when the gettin’ gets tough. There is a lesson in there for all of us.

Joe is a cowboy in the true sense of the word. His passion about the ranching life and pride in his stewardship of both the land and the animals is paramount as evidenced by his relentless work ethic and honest, straightforward attitude. If you don’t want to know the truth . . . don’t ask Joe.

Joe continues to work “almost” single handedly running the RV Ranch as the foreman for 31 years and as everyone in the community knows after 52 years, he still has his “best hired hand” Wanda. His commitment to the community and ranching is legendary to all those who know Joe.