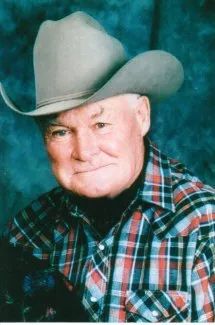 Edward Francis “Butch” O’Connell was born November 9, 1927, to Thomas F. and Josephine F. O’Connell, the ninth of 12 children. Edward, known as Butch to most people, received his education through the eighth grade at Franklin School in Great Falls, Montana.

Butch has loved horses since he was knee high to a grasshopper, and this love grew despite his dad's warnings to stay away from them. One time, his dad's horse kicked him in the butt and out the barn door; his dad's disgust hurt more than the kick, but even that didn't stop him from pursuing a life with horses.

Edward Francis O’Connell married Carolyn A. Pendergrass, and together they had six children: Daniel, Barbara, Wayne, Tim, Theresa and Greg.

Butch’s cowboy life began after his eighth grade education when he went to work for Westside Livestock, which was run by Wolf and Langman. He worked there until 1945, at which time he went to work for Berniece Lewis of Browning, Montana. He remained there until he was drafted into the U.S. Army. While in the Army he was assigned to the Mule Pack with the 611th field artillery where he learned to shoe horses and mules. After 13 months he was discharged and returned to Browning to break horses and herd cattle for Mrs. Lewis. It was during his employment with the Lewis Ranch that Butch’s rodeo carrier began. At the insistence of Mrs. Lewis, Butch entered the 1944 Memorial Day rodeo in Browning. At the age of 17 he won the Saddle Bronc and placed 2nd in the Bareback. Butch also spent three years in Glacier National Park guiding and packing supplies while still riding broncs and shoeing for Mrs. Lewis.

After his job with the Lewis Ranch, Butch went to work for the Miller Cattle Company to break horses for a short time.

Butch worked for the Coby Sheep Company/McKammey Bros. Sheep & Cattle Ranch from 1952 to 1962. During this time, he continued to rodeo during the summers and trapped the Smith River during the winters. He also broke horses for local ranchers along the Smith along with shoeing. He worked in Alder, on the Jim Burns Ranch as the ranch foreman until 1965, at which time he went to work for the Montana Livestock Auction where he stayed for three years. Butch moved on to work for the Montana Livestock brand office where he continued to ride while checking brands and cattle for 26 years. Butch provided shoeing for many people in the Butte, Big Hole, Beaverhead, Deer Lodge, Ruby Valley areas for many years.

Butch’s sister, Lucille Corr says “Butch rode in rodeos in Great Falls, Belt, Helena, Sweetgrass, Choteau, and Browning, between 1945 and 2010. He has taken first place in saddle bronc and bareback riding in Sweetgrass, Choteau, Great Falls, and Browning.” He has special pride in that with his two traveling partners Sonny LaFromboise and Frank Kinney, as they won every Wild Horse Race that they entered as a team. Since learning to shoe horses in the Army, Butch was featured shoeing horses in the Butte/Anaconda Montana Standard in 1987. He was also asked to travel with the world famous Lipizzaner stallions to keep them shod. Butch was asked and did the shoeing when these beautiful white horses performed in Great Falls and also in Butte.

Butch became a true master of the skills required to become a cowboy. From horsemanship, knowledge of livestock, saddle & tack repair to shoeing along with a little blacksmithing thrown in.

Butch was the stunt man for Ronald Reagan in the 1954 movie Cattle Queen of Montana which featured Ronald Reagan and Barbara Stanwick. As stunt man he did the riding for Reagan.

Now in his later years Butch has been trying his hand at roping and occasionally shoes a horse. He is now 87 years old - still working and riding horses.