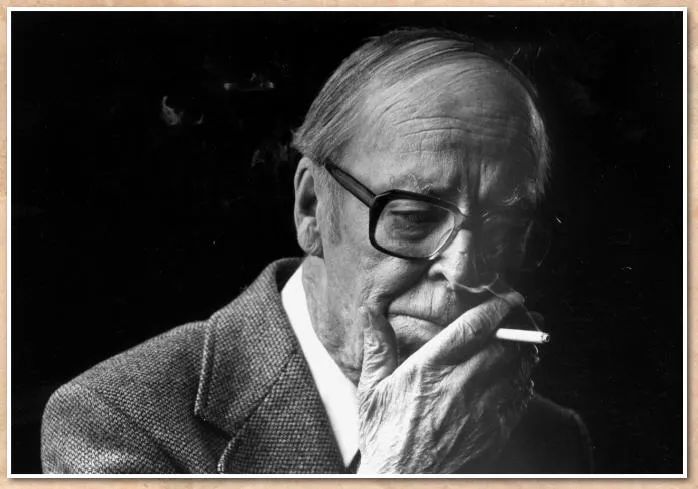 Literary critics and historians consider A.B. Guthrie Jr., who coined Montana’s nickname “The Big Sky,” with his novel of the same name, one of the most important fiction writers of the American West.

Alfred Bertram “Bud” Guthrie, Jr. was born in Bedford, Indiana on January 13, 1901, and came to Choteau, Montana with his parents when he was six months old.

His father, A.B. Guthrie Sr., came west to become principal of the Teton County High School. The family took the train to Collins, east of Choteau, and then took the stagecoach west to Choteau. Guthrie said, “I can only imagine their feelings when, with a small girl in tow and a baby in arms, they got off the narrow-gauge coach at a tiny station called Collins. They had never seen blanket Indians before, never beheld the rude makeshifts of early settlement.” He continued, “They were country folk, but not folk of this country. Endless, bare plains swept around them. The unfamiliar western wind drove dust into eyes and mouths. The vast sky arched over, unbroken in outline by maple or sycamore.”

From his autobiography, The Blue Hen’s Chick, he said, “It was fine country to grow up in. To find riches a boy only had to go outside. There were trout in the creeks, wild ducks on the waters, prairie chickens in the buck brush, rabbits in the thickets, and all within a mile or two. No need of planned play. No hanging onto Mother and asking what to do.”

A constant reader, Guthrie tried to write while in high school. "Fiction pretty much, some essays, but I majored in journalism. My father had been a newspaper man, and I guess he thought it was the way to become a writer." During high school he worked at the local newspaper, The Choteau Acantha, which his father owned then. He attended one year at the University of Washington but hated the gloomy skies, and transferred to the University of Montana where he graduated with a degree in journalism in 1923. After college, jobs were scarce, and he worked over the next few years as a grocery clerk, Census Bureau worker, odd jobs in the mountains, and in a flour and feed mill in Attica, NY. After the mill burned, he finally found a newspaper job with the Lexington, Kentucky Leader. In his 21 years with the newspaper he was a reporter, the city editor and an editorial writer.

Guthrie won a Nieman Fellowship in 1944, from Harvard while working as the executive editor of the newspaper, Lexington Leader in Kentucky. He packed up his family and they moved to Boston for a year. While at Harvard he made friends with Theodore Morrison, an English professor, "who knew so much about writing, probably more than I ever will. And somehow, he took me under his wing. With patience and guidance and always deliberation, he taught me the language of fiction."

Guthrie went back to Lexington and worked for the newspaper. His boss was very understanding, and as long as Guthrie performed his new duties satisfactorily he was allowed to take his afternoons off to write fiction. Murders at Moon Dance, later changed to Trouble at Moon Dance, his first novel, was published in 1943. He always had a dream of writing a series of novels portraying the expansion of the West, following the progression chronologically. Although he wrote fiction, his works are acclaimed for their historical accuracy, dispelling what Guthrie once called the “gun and gallop” myth of the Old West.

The Big Sky, the first novel in the series, published in 1946, was set in the days of the mountain men, not long after the Lewis and Clark Expedition. The second, The Way West, a novel about the journey of American expansion in the old west following the Oregon Trail, was first published during 1949. He produced that novel in less than six months because his publisher had a downturn in business and Guthrie accommodated them with this novel.

The Way West won a Pulitzer Prize in 1950, and many said it was because The Big Sky didn’t win it and should have.

After the publication of The Big Sky and The Way West he was financially able to quit his reporting job, and he then returned to Choteau after 21 years in Lexington, because he said it was his "point of outlook on the universe". He split his residence between Choteau and Great Falls. At Choteau he owned a cabin near Twin Lakes and 800 acres west of town near the mountain front, and much of his writing was done there. He later built a new home across the Teton River from the cabin, designed it to resemble the barn on his parents’ place near Choteau, and affectionately called the new home, “The Barn.”

Although Fair Land, Fair Land is the third in the chronology, Guthrie wrote it as the last of the series of six. In his "Author's note" at the beginning of the novel, he wrote that he had "sworn more than once to write no more about the early-day West and just as often have broken the vow." He said that with Fair Land, Fair Land, published in 1982, he was breaking the vow again to fill the time gap, "roughly from 1845 to 1870," between The Way West and These Thousand Hills.

Guthrie continued to write predominantly western subjects, including the Academy Award-nominated script for the movie Shane during 1953. Other fiction included the novel These Thousand Hills, Arfive, The Last Valley, Wild Pitch, The Genuine Article, No Second Wind, Playing Catch-up, and Murder in the Cotswolds. During 1960, he published a collection of short stories, The Big It and Other Stories.

Biographer Jackson J. Benson said, “The small Montana town that figures in several of Guthrie’s books is clearly patterned after the town where he grew up, Choteau, on the eastern front of the Rocky Mountains.” Many of the characters were based on actual people in Choteau.

In later life Guthrie became an outspoken environmentalist with sympathy for the grizzly, and donated 80 acres to the Nature Conservancy’s Pine Butte Preserve a year before his death. Biographer Benson says, “He believed that if we had to have progress, it should be a progress in quality rather than quantity — not more people, but more informed and responsible people; not more development and increasing use of resources, but wiser use of resources.” Guthrie’s environmental stance reportedly caused a rift between him and many local folks.

Guthrie died at his home, “The Barn,” west of Choteau April 26, 1991, and services were held at the Choteau Cemetery, with his ashes scattered on his beloved Ear Mountain.