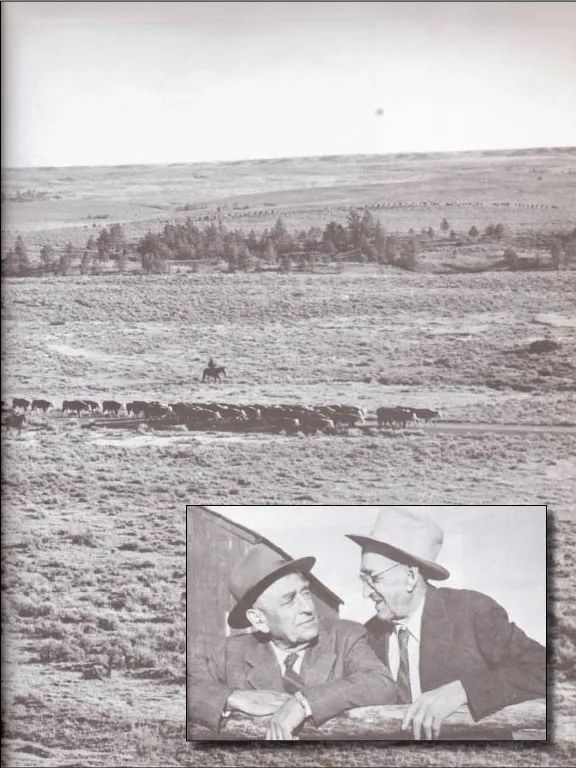 At its peak in the 1930s, Miller Brothers Land and Livestock owned and operated 346,000 acres of the “finest range in Montana.” The ranch ran from the Canadian border south through the Bears Paw Mountains and the area of Cleveland, Montana about 70 miles. In some places the land extended up to 40 miles east and west. Of these 346,000 acres, 125,574 acres were deeded and 218,000 acres were leased. The ranch put up 8,000 ton of hay, and 400 miles of fence went “in, through, and around it.”

The ranch was started around 1892 by Peter Miller who traveled from Crawford County, Iowa with a team of horses and wagon to purchase 160 acres of land in the Bears Paw Mountains. Miller was a German immigrant and he brought his oldest son Henry west with him. The two spent the first year growing a garden and putting up some hay. After purchasing 275 old ewes from a neighbor, Peter and his son sheared the sheep and then sent for the rest of the family. The family arrived by train car via the Great Northern Railroad. Later, Peter’s two sons Henry and Chris, still in their teens, took over and called the ranch Miller Brothers Land and Livestock under the brand E Bar Y. The ranch started with sheep and wool production, and at one time maintained five lambing camps. Over the years cattle were added to the enterprise and became the main livestock. In 1957, all sheep were sold and the ranch became cattle only. At their peak, the Miller Brothers ran 10,000 head of cattle, wintering them in the foothills of the Bears Paw Mountains and summering on the Canadian border and Fort Belknap Reservation near Harlem, Montana. The Miller Brothers ran 200 head of range mares to breed horses for replacement mares, saddle horses and draft horses.

Brothers Chris Miller and Henry Miller were the main bosses of the outfit, and Henry’s son Erwin ranched with them. Each one had a particular area they managed – Chris ran the sheep, Henry took care of the cattle’s hay, feed and wintering, and Erwin managed all the range activities of branding, calving, trailing and shipping. The Millers calved out 1,000 heifers each year at Lodgepole on the Fort Belknap Reservation, and had up to six hired men running the camps. The older cattle also calved out on the Fort Belknap Reservation. Branding started the first part of June. The men would round up the cattle and put them in temporary snow fences, five or six hundred cows and calves at a time. The snow fences were moved from spot to spot until all the calves were branded, which usually took three weeks to a month of solid work. Following branding the cowboys would round up the range mare bands so they could brand the colts, cut the studs, and pick horses to break for saddle horses. The horses were a Percheron/Thoroughbred cross and they were bred to be hardy and tough. Since the horses weren’t handled except for twice a year and ran in a field over ten miles wide, the horse round up always saw plenty of action and a lot of fast riding.

Chris Miller married a neighbor girl, Carolyn Kuhr, whose family had also moved west from Iowa. The marriage united the two families’ land holdings. In later years, the Miller Brothers were assisted in management by Chris and Carolyn’s son-in-law, G. Ted Westin, who was married to their daughter Lillian. Chris and Carolyn had two more daughters, Doris and Dorine. Henry Miller also married a local girl, Sophie Hofeldt, and she lived at their home in Chinook, Montana and raised their children Erwin, Henry, Les, Howard, Dorothy and Marie.

The Miller Brothers’ company used the towns of Lloyd, Chinook and Cleveland on its letterhead for a mailing address. Henry and Chris Miller were active and essential in the development of agriculture and economics in Blaine and Chouteau Counties. Peter Miller had been part of the Chinook Commercial Club founded in 1904 and later his sons continued in this organization which was said to “promote several community projects and to establish Chinook’s supremacy in Northern Montana.” The Miller Brothers were fundamental in the formation of grazing districts, were members of state, national and local groups promoting livestock markets and production, and helped to organize the First National Bank of Chinook in 1909. This banking house served the area for 21 years before assets were sold to Chinook’s Farmers National Bank. The Miller brothers retired in 1958, after 65 years of operation when they sold the ranch and stock to Wellington Rankin. Henry and Chris Miller remained in the Chinook area until their deaths in 1961 and 1968, respectively.

Halseth, James A., Cowboy Ways: On and About the E-Y of Chinook, Montana. Sioux