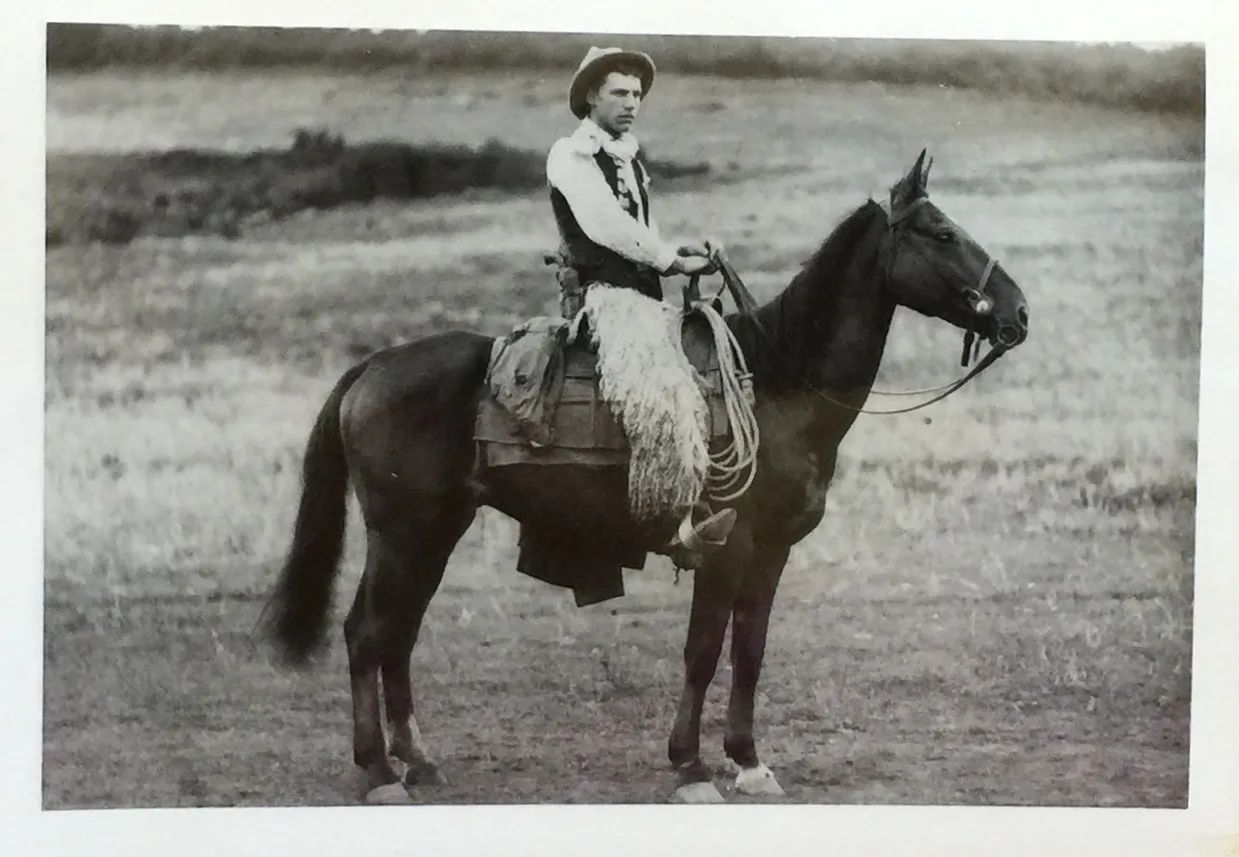 Harry Stuart Green was the consummate cowboy. Even though he lived well into the age of the automobile Green was more comfortable on a horse than in a car. Green lived most of his life on a horse, capturing wild horses, training them, buying and selling them and usually always riding a big thoroughbred horse with a slim neck.

Lawrence Green who today owns Harry Green’s Bear Paw ranch remembers his uncle as being a very quiet man. “Harry never told you anything. You had to ask,” explained Lawrence Green. “I think you had to know there were things he didn’t want you to know.”

Lawrence Green also explained there were very few pictures ever taken of Harry Green and when in them, Green was usually turned away from the camera.

It was not unusual for Harry Green to take off from the Big Sandy country and ride with a pack horse to Calgary and rope in the first Stampedes. Matter of fact Green knew Havre cowboy Clayton Jolly well who was the rodeo clown in the very first Calgary Stampede in 1912.

One-time Green rode all the way from Lewistown to Big Sandy, between sunrise and sunset a total of 105 miles, just to prove up on a bet. Quite a rider was Harry Green.

When Green went to work at the Tingley ranch, he soon managed the ranch and often traded horses with Oliver Tingley. Green was known to be able to take a no account horse and train it so well as to turn it into a great horse in a couple of weeks.

But all that is getting ahead of the story.

Harry Stuart Green was born at old Fort Maginnis, Montana in the fall of 1884. He was the son of Sergeant Hugh Hamilton Green who headed up the cavalry at Fort Maginnis and Anna Coulsen. Harry was one of a large family that was to number five girls and four boys.

Green went to school in Giltedge, a small town northeast of Lewistown, Montana. John Beaudette writes that the youngsters sat on rows of log benches on a dirt floor. Green did not finish the third grade for a man’s life of riding, roping and bronc busting was just outside of the schoolhouse door.

He, of course, knew Kid Curry and even provided a hideout for Long George Francis when Francis was on the loose after being convicted of horse stealing in the 1920’s.

Lawrence Green picks up the story there -

“Uncle Harry had bought a ranch on Sandy Creek in the Bear Paw Mountains from a Frenchman by the name of Joseph Gontier. Harry and George had ridden together at times and after Francis was convicted of horse stealing, the Hill County Sheriff let Francis out of jail for a few days so he could clean up his affairs. Francis went on the lam and ended up in a dugout hideout in the Cabin Field of Harry Green’s ranch,” explained Lawrence Green. “The remains of the dugout are still there. My dad brought Long George’s mail and supplies to the dugout all the time, hiding them under a rock so Long George could get them.”

Lawrence recalled with a laugh that Long George was very jumpy at that time so when his dad came to the dugout he made plenty of noise. Long George had a pistol and would have used it. That pistol is today one of Lawrence Green’s treasures along with a mouse trap made out of a syrup can that Green found many years later still in the dugout.

During Green’s riding and roping days, wolves in Montana were a big problem as they killed calves and colts.

Harry Green said, “I remember seeing fifty wolves in a bunch. And I roped three in my life but I hate to say it because no one will believe it.”

Green had worked for many ranches in his early days including the famous Coburn Circle C ranch near the Little Rockies.

Green came into the Big Sandy country in 1903. The Big Sandy “Green Book” reports that it was late in the evening when Harry Green first came to Big Sandy. “He tied his horse by the Log Cabin Saloon and went to the front where two men were in a fight. One had the other down and was beating him. Harry pulled the one on top off, who was Babe Tingley. The other was Fred Bly.”

Green’s first job in the Big Dry Country was working for McNamara and Marlow cattle ranch. He later managed Tingley Brothers ranch. Green was also a deputy sheriff from 1908 until the 1920’s in Chouteau County.

Beaudette reports that most important of all in Green’s early years was that he was a bronc rider. He started riding when he was about sixteen years old. Even before that, as far back as he could remember Green had wanted to break horses. He drew forty dollars a month as a cowhand and an extra five dollars for each horse he broke which was usually one or two a month.

Beaudette continues that one of the most memorable incidents Harry Green had was when he rode to a standstill the powerful outlaw horse Steamboat which had been decking many of the west’s better riders.

Harry Green was married twice. His first wife was Pearl Moore. They had a daughter Ruth who died at age 17 of Spinal Meningitis. Later Harry Green married Marion Heise in the early 1930’s.

Many people who wrote about Harry Green used the same quote so it must have been true that Green said more than once, “I wish I could do it all over again.”

Harry Green died in May of 1964 at the age of 79. At his death a vast part of the old west of Montana died with him.