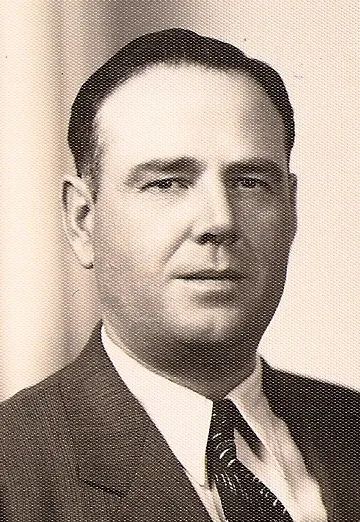 Manly Anderson Moore, Sr. was born December 31, 1906, in Boise, Idaho to Chester and Carrie (Betterton) Moore. He was raised on the family ranch south of Alzada, Montana. Manly attended high school in Hulett, Wyoming and graduated as valedictorian in 1924. Manly then attended the University of Wyoming for two years on a full-ride scholarship, but returned home with other ideas and plans. The Great Depression was starting, and as jobs were hard to find, Manly herded sheep for his uncle, Trusty Moore.

In 1933 Manly met Edna Griffis and they began a lifetime partnership in marriage and ranching. Throughout their lives, Edna played a big part in the ranching operations. Manly wanted to ranch more than anything else in life and met with the bankers in Sundance, WY to begin that dream. The father of one of the bankers was facing foreclosure and Manly was able to assume that debt and buy the ranch. This transaction established his credit and also built a good relationship with the bank that lasted a lifetime.

With the bank backing him, Manly bought sheep for $1.00 per head and was able to put a band together. He then leased twenty sections of land south of Moorcroft, Wyoming and spent the next several years living in a claim shack with his family and increasing his sheep numbers.

About 1938, Manly moved the family to Biddle, Montana and leased the Old Cross ranch for a couple of years, later moving to the Kopp Ranch, which he purchased for $16,000. He traded a band of sheep for another ranch owned by Bud Horton and a third ranch was bought from Lee Engle on a flip of a silver dollar. The Engle ranch on Crow Creek joined the Kopp Ranch and the Horton Ranch was close by, making a total acreage of over 46,000 acres. The ranches were very productive allowing Manly to run 1,450 Animal Units with a combination of deeded, state, and BLM acreage. This entire area became known as the Cinch Buckle Ranch when it was incorporated in 1961. The ranch brand was the “buckle”.

Manly took great pride in raising the best Targee sheep in the country and wintered 6,200 head in 1949. He didn't regret not completing college, and said he received a better education working with all the hired help on the ranch than he ever would in college. It was necessary to have up to five sheep herders at one time, plus three or four regular ranch hands and 10 or 15 hands during calving and lambing. Manly had a great sense of humor and he loved to play jokes on people. One time he threw the head of a mule deer buck into the corral by the barn. It drove the hired hands crazy trying to figure out who was trying to set them up with the Game Warden. Another time he told his wife and the other ladies on the ranch that they either had to work or give milk to be on this outfit. Edna responded that that was not fair because she was doing both! Whenever trading or selling horses, he would always say he would guarantee the horse if they would guarantee the rider.

Livestock thefts were a huge problem in those days, and most of the thieves were acquitted if they were defended by Timer Moses. Manly said to the board "Who is this Timer Moses?" They told him and Manly answered, "Then let's hire him!" The Livestock Board hired Timer Moses at a $20,000 retainer fee to assist the County Attorneys and the theft of livestock almost disappeared. Manly was also a leader in getting rid of predators. He and four other ranchers each threw $500 into a pot and hired Alvin Tatge with his Super Cub plane to shoot coyotes, fox and other predators.

Manly paid top wages to his help and always provided an incentive for them to work and help both sides. He would stake a good hand that wanted to be a rancher with some cattle or sheep, and they would then run them on the ranch. Several of these hands went on to own their own ranches. He would give bonuses in many different ways. The herder who had the heaviest lambs would get a good cash bonus and the other herders would get a fifth of whiskey. Haying contractors would get a nice cash bonus if they got the hay up in a good manner. Another time when Doran Higgins was growing up on the ranch, he gave Doran a new saddle for always helping out when needed. Doran has not forgotten that and still thinks Manly was a great man.

Son Willard recalls this story: Every fall around the middle of September, Manly would ship the lambs. This one year he had four bands of ewes and lambs to go. He put a Pool together on how much the lambs would weigh on each shipment. All the ranch hands, herders and even the cook could play. The cook would give him a list for groceries, so every time he would bring back groceries, he would give her back the list to so she could make sure he got everything. He also gave her the average weight of the wether lambs. Time after time she would win, not even seeing the lambs. Some of the hands would shake their heads and cuss a blue streak, trying to figure out how she continued to beat them. But when shipping was over, Manly couldn’t keep the deal a secret any longer. He brought home a couple of whiskey 5th’s and fessed up. He gave the money back from the pool, the hands drank the whiskey and everybody was happy again.

Manly Anderson Moore, Sr. helped the livestock industry in the cowboy way, not only in Southeastern Montana, but throughout the whole state. He was also a truly good neighbor in every sense of the word. Manly passed away May 17, 1977. His wife Edna passed on November 25, 2005. Both are buried in the Valley View Cemetery in Broadus, Montana.