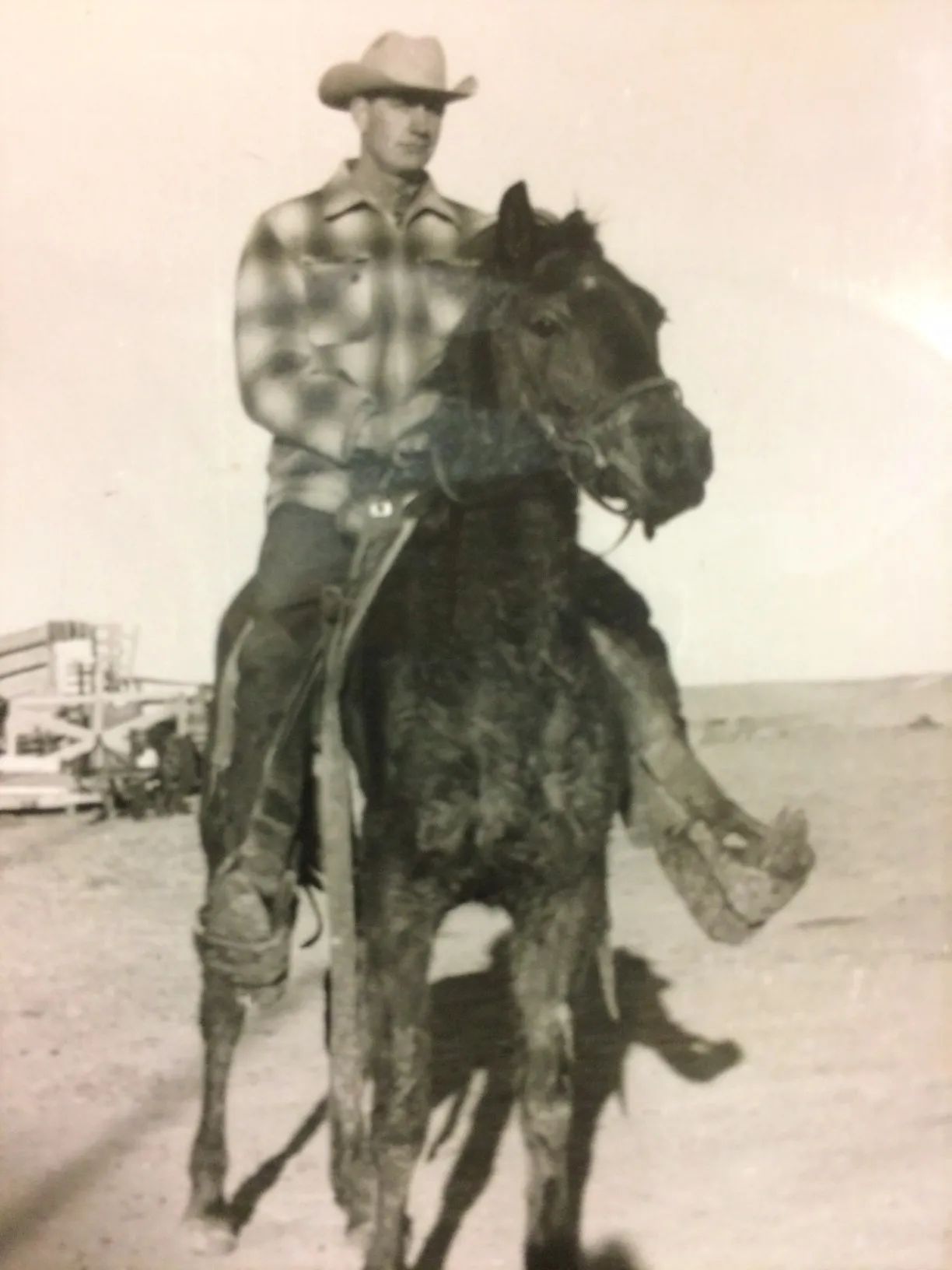 C. A. “Bud” Kramer had horses and Garfield County stamped in him before he was born. His father, Charles A. “Charlie”, and his uncles, Lou and Frank trailed cattle from Colorado to Montana in 1892. All of the brothers settled around Snow Creek, but Bud’s father was the only one that stayed.

Bud’s mother, Katherine, ran the Jordan Hotel while Charlie was deputy sheriff for Dawson County, which then included the town of Jordan and what is now Garfield County. Bud was born February 22, 1913, in Jordan and named Corwin Allen Kramer. Charlie died in 1935.

Bud grew up and attended elementary schools in Garfield County. He spent most of his time around horses. Horse teams then were used for constructing roads, dams, and digging basements, and young horses were always needed to be broke to saddle. C.A. “Bud” started going to the Big Dry Creek area — known to locals as ‘The Dry” — to the Harbaugh Ranch to break and ride the rough string before high school, which he didn’t attend very often. If anyone had a horse to break, Bud would take it with a soft voice and a big smile.

By the time he was 18 he had grown to be nearly 6’ 7” and weighed 190 pounds with hands that possessed a soft, but strong touch.

For the next 10 years Bud broke and managed horses, entered rodeos, and worked on cattle ranches. He always had a job. One was lambing for area ranches in the spring of the year. He appreciated that line of work because it paid the best and the food was good. Bud was a regular at the Garfield County dances.

Bud started his first stud bunch with a horse called Sand Creek. Soon after, he started producing rodeos by gathering and trailing Sand Creek and other horses to local events. He also competed in the saddle bronc riding and wild horse races.

In March of 1942, Bud was drafted into the United States Army and stationed in Fort Riley, Kansas with the Calvary division as a horseshoer, eventually becoming a sergeant. What he learned there about a horse’s feet and how to care for them, he’d never forget.

While home on leave in July 1943, he married Bobby Brooks and this was their start of an unbelievable partnership in the horse business. Upon Bud’s discharge, they settled into ranching at the heads of Little Dry, Basin, and Acorn Creeks in Garfield County. From there they could ride to Miles City and never open a gate. They had other livestock besides horses, including cattle, sheep, and hogs, but horses were the backbone of their operation through good years and bad.

Bud always said timing was everything. When a sheep man named Ted Birkham passed away, Bud and Bobby decided to try to buy his property. Bobby made the deal and wrote the check on a near- empty bank account for nearly 30 sections of land. The following morning, they were at the bank in Miles City and borrowed the money. They put up 1000 horses and a few sheep and cattle as collateral. The federal auditor later told the banker to get rid of that loan as horses weren’t good collateral. The banker told the auditor to just stick to auditing and he’d worry about the Kramer loan. Bud and Bobby already had a few scattered sections of land, but this acquisition was the start of a ranch that grew to over 100 sections.

Bud’s horse program was formed by acquiring horses in an area that ran between the Missouri, Musselshell, and Yellowstone rivers.

From the horses Bud had seen in the army, Bud and Bobby realized range saddle stock needed to be improved, so they bought well-bred quarter horse stallions — including Little Texas E, Thirsty Jr. and Side Twist — and bred to mares they thought had good dispositions.

They were soon holding horse sales where their horses sold from $500 and up. One Thirsty Jr. colt that was trained for calf roping brought $10,000.

Bud sold many bucking horses over the years to Jake, Elra, and Lynn Beutler, known as the Butler Brothers, whom he’d met while in the army. After Beutler Brothers sold to Harry Vold and Mike Cervi, he delivered horses to them at Belle Fourche, South Dakota, Butte, Montana and Sheridan, Wyoming. It was with great pleasure that Bud once accepted an invitation from Harry Vold to attend the entire production of the Calgary Stampede.

Bud was always helpful to stock contractors or rodeo committees short on bucking stock by getting the animals they needed to them on time and generous in helping people and events get started. He helped Sonny Linger (Linger Rodeo Company) when he first came to Montana and assisted Judd Twitchell in getting the Jordan Matched Bronc Ride started. It was first held in Cohagen, Montana and then moved to Jordan.

Bud bought horses all over the country, but he got a lot of bucking horses close to home because he knew where the good ones were located. Bud was proud that many Kramer broncs had long rodeo careers.

When he was asked which horse was his favorite bucking horse, Bud would say, “All of them, in different ways.” He always had a little smile if a cowboy got bucked off and a big smile if someone rode an especially rank horse. High on that list were Descent and Little Dan.

The worst memory Bud recalled was the spring of 1969 when a late April snowstorm hit with three days of heavy, wet snow. Because it had been a mild until then, and horses had shed their winter hair, the Kramer’s lost over 250 horses. He envisioned there would have been many great prospects in those horses.

Bud could never say for certain, but at any time there were 1500 to 2000 horses on the ranch. He said he was glad to have lived when he did. In his lifetime transportation went from horse and buggy to the automobile, telephones and electricity became available in every home, and travel to outer space and the use of computers became common. With all of that, Bud was proud to have made a life with horses. He had bucking horses go to rodeos coast-to-coast, from the smallest rodeos, to the largest rodeos of the time. He had horses at every National Finals Rodeo from the start until after he passed away.

Bud passed away July 6, 1979, in a truck accident while hauling cattle to Cohagen He was a big, soft spoken, somewhat shy man, who would have considered it a great honor to be in the Hall of Fame.