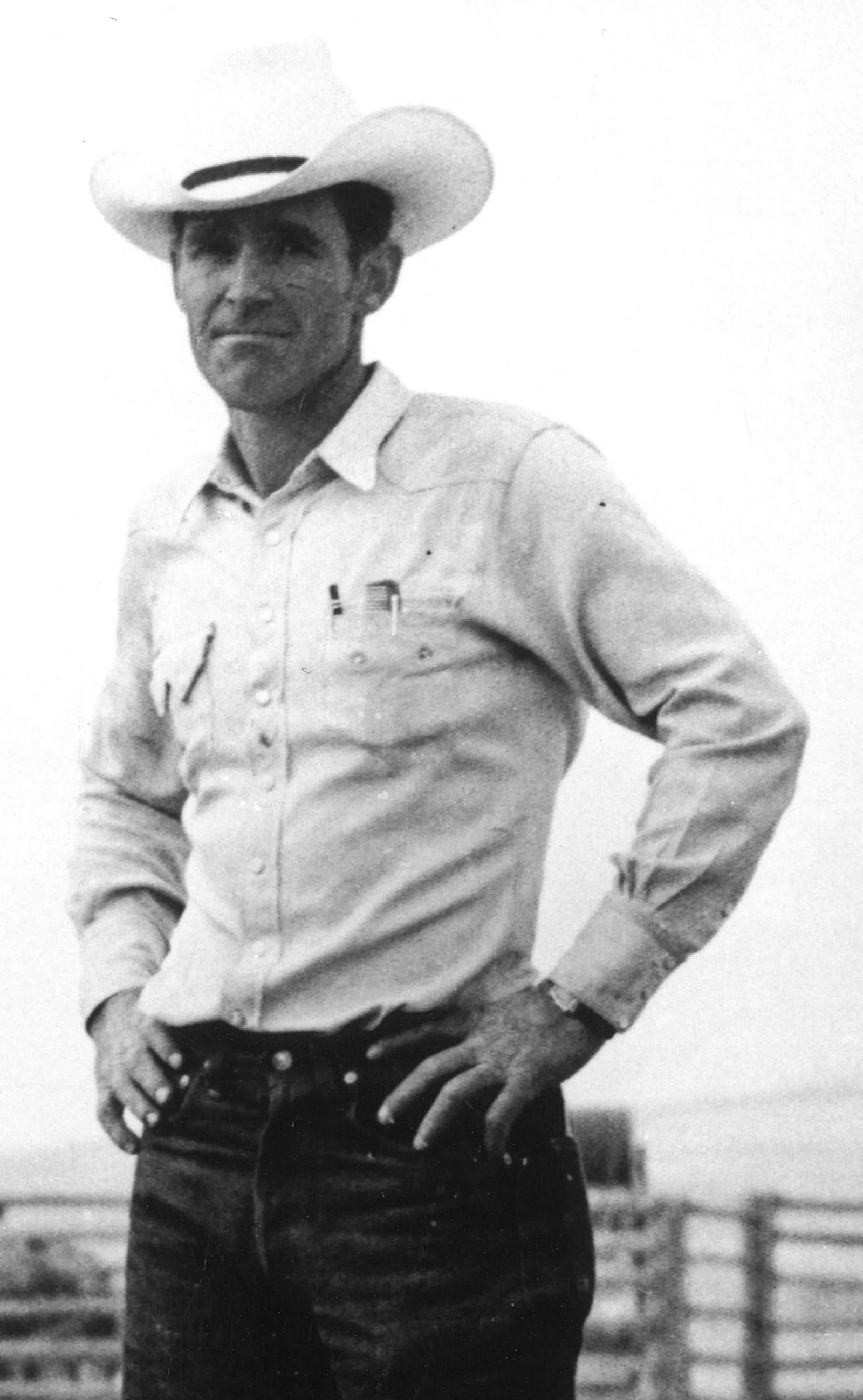 Melvin Ralph Icenoggle was born in Bozeman, Montana, on July 2, 1912, just two months after the death of his father, Joe Icenoggle. His father had died from a ruptured appendix. Mary, Mel’s mother, had fallen on the wet floor of the milk house at the family ranch near Twin Bridges just prior to Joe’s death. Due to the fall, Mel was born nearly two months premature. There were no incubators in 1912, so Mary kept the tiny infant in bed with her to keep him warm. Premature or not, Mel grew up strong and independent.

Life was hard for Mel’s mother, Mary. As a single mother in the early 1900s, Mary had to rely on family for support. They moved around among extended family scattered from Montana to California and Oregon. Mel had to work for room and board at an early age. Some of his early experiences included exercising race horses at the Tanforan Race Course near San Francisco for an uncle and farming with four and six horse teams in Oregon at age 12. That fall, with no money, Mel hopped on the train to get back to Montana so he could attend school at Cardwell. Riding a black railroad tank car, Mel’s train slowly passed through a forest fire on the St. Regis cutoff. The car got hotter and hotter, and Mel related how he had to “dance all the way to St. Regis!”

Mel married Lila Nicholls in Butte, Montana, in 1933. They raised three boys – Edgar, Bill, and Bruce. Mel worked at anything he could find from ranch work to mining, trucking, fence contracting, horseshoeing, and chasing wild horses out of Hell’s Canyon. Between times, Mel broke dozens of horses and rodeoed. Fiercely independent, Mel always refused to take a public works job such as Works Progress Administration (WPA) during the 30s depression.

Mel won his first money in professional rodeo at Livermore, CA, at the age of 16 riding rough stock. Some of Mel’s most notable wins included the “Livingston Roundup” when he won the bareback riding, steer wrestling, and third in the saddle bronc. Mel was the All-Around Champion at the Dillon Rodeo in 1948. “All-Around” in those days required that money must be won on both rough stock and timed events. Mel won the bronc riding at the Butte Rodeo in the 40s against some of the best Rodeo Cowboys Association (RCA) cowboys of the day. Known as the Vigilante Stampede, Butte was a major stop-over for cowboys on the way to Calgary. A wild horse racing team consisting of Mel riding, Al Shoenberger mugging, and Hans Rasmussen saddling, won many go-rounds at Butte and other rodeos. Mel also frequently teamed up with Billy Schall and Moose Rouse.

Mel was actively involved with several rodeo producers including Bob Rooker, Doc Sorenson, Mike Quinn, and Herman Peterson of the Cross and Hairpin Ranches of Horse Prairie and the Big Hole Valley. Mel tried out hundreds of horses over the years, most notably at Armstead, Montana, now flooded by the Clark Canyon Dam on the Beaverhead River south of Dillon.

Mel moved his family to the Jumping Horse Ranch at Ennis in 1947, where he broke and trained Hunters, Jumpers, and Thoroughbred racehorses. The featured sire at the time was Friar Dolan who was the winner of the Grand National in England. Two horses of note that Mel trained included a mare that went on to compete in the Maryland Hunt Cup Series and a gelding named Buffalo Grass. Buffalo Grass was purchased by Rufus Ingersoll who made him into a great hazing and rope horse. When the occasion presented itself, Rufus would match-race Buffalo Grass with Mel riding. A notable race took place at the Dillon Fairgrounds with Mel riding Buffalo Grass and George Richman, a well-known calf roper from Park City, riding the other horse. Buffalo Grass was the decisive winner.

Mel was credited, along with others, with helping to revive the Ennis Rodeo at the old Womack Arena in the late 40s. This led to the founding of the Ennis Rodeo and Racing Association, a private stockholder corporation, in the early 50s. This corporation was formed to buy 40 acres just west of Ennis. The Ennis Rodeo Association and rodeo facilities are alive and well today with plans to hold their 78th annual rodeo July 4, 2014. Mel was also a founding member of the Montana Rodeo Association which initially included several rodeos, primarily in southwest Montana.

During construction of the Montana State College Fieldhouse in 1957, Mel contracted to design and build a portable arena so rodeos could be held in the Fieldhouse. His “jackleg and split rail panel” arena served college rodeos, Professional Rodeo Cowboys Association (PRCA) rodeos, and several College National Finals rodeos for upwards of 20 years until finally replaced with steel. After completing the arena, Mel was offered a job by Montana State University and worked at the Fieldhouse until his retirement in 1972. Never content with working a fulltime job, Mel built and operated a post and pole yard until the early 80s. An accomplished farrier, Mel shod hundreds of horses. Perfectly built for shoeing and handling rank horses, Mel was known as “Strong Grandpa” by some of his younger grandchildren.

After his death in 1985, the Ennis Rodeo Association dedicated the 49th annual rodeo to the memory of Mel Icenoggle. An original designed “Mel Icenoggle Memorial All-Around” buckle was awarded to the winner, Richard Carpenter.