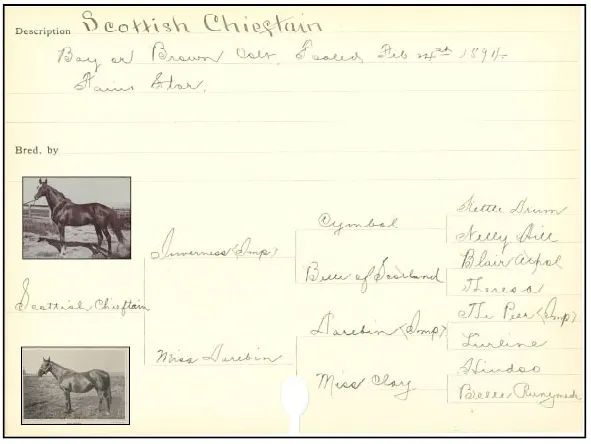 Scottish Chieftain is the only Montana-bred Thoroughbred to ever win the Belmont Stakes. In the year that he won it, 1897, the race was already an established American Turf classic. In fact, elite Thoroughbred breeders of the era coveted winning it more than winning the Kentucky Derby, which didn't gain national prominence until 1915.

Our state's Scottish Chieftain was foaled on February 24, 1894, at the Bitter Root Stock Farm near Hamilton. Perhaps it was the superintendent of the farm's Thoroughbred training and breeding, Sam Lucas, who noted on Scottish Chieftain's birth card "bay or brown" color and described the lone marking as "faint star." Although copper-mining magnate Marcus Daly owned the 26,000-acre outfit it was Lucas who ordered the pairing of the English-bred sire, Inverness, and the California-bred dam, Miss Darebin. Their son would win the 1897 Belmont Stakes.

Scottish Chieftain began his racing career under Lucas's tutelage. In 1869, Lucas shipped The Chieftain, as turf writers called him, to New York's Sheepshead Bay Racecourse where his campaign generated modest success: He won three of eight starts, came in second once, third twice, and unplaced twice.

Early in the 1897 season trainer Matthew Byrnes watched The Chieftain routinely outperform his stable mate, English-bred Ogden, during conditioning workouts. It's open to speculation which horse Byrnes considered the lesser, but for the Belmont Stakes, it was Scottish Chieftain. The Chieftain's role, then, was not to win the race but to act as Ogden's rabbit; or in other words, catapult into the lead and set a pace so fierce as to melt the legs off the competition. Once that was accomplished, the jockey, heeding Byrnes' instructions, would rein in The Chieftain and orchestrate a win for Ogden.

On Belmont Stakes day, May 29, 1897, six snorty Thoroughbreds lined up at the start. The Starter's flag dropped. In the first turn of the one and three-eighths-mile race, Don De Oro, the favorite, led the pack and set the pace. Scottish Chieftain lapped at his heels. The pace quickened at the head of the homestretch. As the horses galloped furiously toward the finish, Scottish Chieftain and jockey Joe Sherrer made a bid for the lead. Don de Oro, exhausted, tried to match strides but Scottish Chieftain took command of the race and the punishing pace. Suddenly the swooping strides of On Deck challenged The Chieftain. Jockey Sherrer dropped low to the saddle and urged his horse to run faster. The Chieftain flew. He streaked past the finish line, won the race by a length and clocked 2:23¼. He cracked the track record by a second and three-quarters.

Matthew Byrnes didn't mind winning with the wrong horse. Greeting Scottish Chieftain in the winner's circle, he exclaimed, "Bring that cup [the trophy] and let the horse have a drink out of it: he deserves it." Accounts of The Chieftain's game victory splashed across Montana. The Western News effused: "The victory was especially gratifying from the fact that the great three-year-old was bred and raised on the Bitter Root stock farm -- a genuine product of the Bitter Root ozone and bunch grass."

The Chieftain's Cinderella story that began at the Belmont Stakes starting line also ended in its winner's circle. In the remaining major stakes races of 1897, he placed fourth, fifth, and second. In 1898, he was back in his native Montana where he raced on the local circuits, namely Anaconda, Butte and Great Falls, winning five of seven races. Scottish Chieftain didn't race at all in 1899, perhaps because he had been sold. In December of 1899, The Anaconda Standard noted: "One of the Daly stock cars left here yesterday carrying to the Montgomery breeding farm, in Madison County, two brood mares and also the Thoroughbred stallion, Scottish Chieftain."

The absence of personal accounts by the men who handled Scottish Chieftain and the absence of photographs of him leave us wondering: Was he a charismatic beauty or common looking? Thoroughbreds have quirks. What were his? Was he an easy goer or did he have to be urged? We know that the coveted Belmont Stakes trophy came to Montana because of his athleticism and heart, proving that his place in American Turf history shines brighter than his lone marking, a faint star.

Mary Simon, Racing throughout the Century: The Story of Thoroughbred Racing in America (Irvine, CA, 2002), 42, 72.