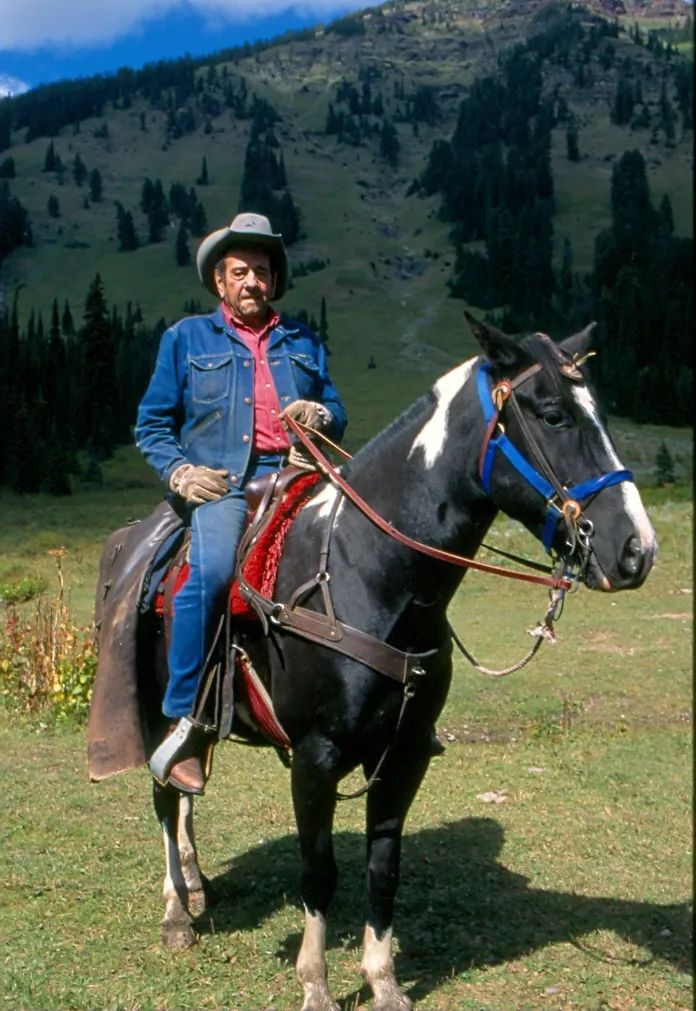 Clarence Barron "C.B." Rich was born in a log cabin on the family homestead at the foot of the Beartooth Mountains in Dean, Stillwater County, Montana in 1919, to parents Clarence Gallatin Rich and Anna Margaurite (Barron) Rich. He spent his young “growing up” years working the ranch with his sisters, parents and grandparents. They raised horses, cattle, grain and hay and did extensive horse freighting of supplies up into the nearby high-elevation mining camps in the upper Stillwater Valley. He learned the art of breaking and shoeing horses early on and that, along with roping, raising cattle, driving teams, and packing mules, became his life’s work. After high school he spent two winters trapping in the deep snow of the Absaroka-Beartooth Wilderness to save enough money to enroll at Montana State University.

C.B. Rich, a fourth generation Montanan, spent a lifetime exploring the wild lands of Montana as a cowboy, mountain man and trapper, and for over 50 years as an outfitter-guide and poet. C.B. shared his love of and passion for the backcountry and Montana’s rural country lifestyle with friends and guests from all walks of life. His philosophy on wilderness and the outdoors is expressed in several of the numerous poems he wrote during his adult life, including his best-known work, "An Outfitters Prayer.”

© By C.B. Rich Oh, Lord, no man-made portals show Your realm to me,

I see it in my life in spaces wide,

Where towering mountains rear their heads in tribute

Beyond the quiet, peaceful countryside.

It’s here I see the wonders of creation,

From bud to leaf, from twig to stately tree.

The growth of things from humblest beginning.

Can only help instill humility.

The balance of powers You created,

The gentle breeze that’s all there is remaining,

Of high, wild winds the mountains turn and brake.

Please help me find the trail that wears Your blazes,

And guide me ‘til the clouds of trouble pass.

Make me as big as mountains high above me,

Yet humble as the smallest blade of grass.

Just let me be as honest as my pony,

And lead a string for camps along the way.

To help out those who may not have an outfit,

So all who can reach the Pass someday.

After two and half years of college, World War II interrupted his education. C.B. enlisted in the United Sates Army Air Corps in 1942, and became an officer and Air Observer Navigator. While on a bombing mission his B-24 was shot down over northern France. He parachuted out of the burning airplane and used his country-boy skills to evade German capture for several months before returning to Allied lines. For his service he was awarded the Purple Heart, Air Medal, Walking Boot, and was a member of the Caterpillar Club for surviving his emergency parachute jump.

After returning from the war in 1945, he and his high school sweetheart/new bride, Helen Elizabeth (Calhoun) a third-generation Montanan, born in Columbus, Montana on June 3, 1921, to parents Gertrude Harris Calhoun and John Clarence Calhoun, bought the Rich family homestead in the Stillwater Valley. To supplement the ranch income, he started working the local rodeos as a part-time pick up man while also competing in calf/team roping events. The Beartooth Mountains continued to call to him, so he began outfitting a few backcountry hunting and fishing trips as well. In the mid-fifties, when Yellowstone Park managers killed off thousands of elk near the Slough Creek drainage where C.B.'s main camp was located, he was forced to look elsewhere to continue his packing and outfitting business. In 1958, Helen and C.B. sold the family homestead and moved with their Hereford cattle, pack outfit and five young children to a new ranch in the Blackfoot/Clearwater Valley, near the southwest corner of the Bob Marshall Primitive Area. From their “Double Arrow” Ranch in Seeley Lake, C.B. began sharing the splendor of the Bob Marshall Wilderness and their new base camp in Leota Park. The value of sharing that special place continues to live on in the hearts of all the family, friends, and guests who were fortunate enough to have joined him around a campfire.

He was very active in the Seeley Lake community, and his work included helping to enlarge the Seeley Lake grade school and lobbying for construction of the local high school, established in 1964, so students didn't have to commute to Missoula on the longest school bus ride in the U.S.

In 1964, he was a proud member of the Montana Centennial Train. This group of over one hundred ambassadors began in Montana, traveling by train for thirty-one days through 18 states, participating in 22 parades, and culminating with the opening of the World’s Fair in New York City. While driving stagecoach with his personally trained four-horse hitch of matched pintos, C.B. hauled the Montana governor, Miss Montana, and numerous other dignitaries. He even delivered the Orioles’ pitcher to the mound in Baltimore Stadium. This adventure is considered by many to be Montana’s biggest ever advertising campaign.

C.B. served twice as president for Montana Outfitters and Guides, traveling to Washington D.C. to meet with Forest Service representatives and congressional leaders to develop guidelines, ensuring the future of outfitting and wilderness.

Son Jack eventually bought the pack outfit from C.B., but C.B. continued to be an integral part of the operation, sharing with Jack many happy trails. In his later years, he and Helen were to witness their dreams carry through another chapter when, in 1994, Jack and his family started up the Rich Ranch, a new Outfitting and Guest Ranch near Seeley Lake. C.B and Helen moved to the new location with their children and grandchildren and continued sharing in the family legacy. In later years emphysema slowed him some, but it gave him special satisfaction to spend his last few years still in the saddle on his black and white paint, "Teton". In the summer of 1996, at 77, C.B. took his last pack trip. He camped once again in Leota Park with his family, including Milt, his life-long friend and crew mate from WWII. Before passing, he celebrated 54 years of love, life and laughter through marriage to his lady Helen, who survived him for another nine years at the family ranch in Seeley Lake.

His gift of poetry and ability to share his world as a master storyteller led him to write and publish two books on his life experiences. Along the trail, he managed to touch many, frequently reaching out to those who appreciated and valued his wisdom and insight, whether deep in the backcountry or a big city far beyond Montana’s Big Sky.

On October 21, 1996, he was buried with his parents at Mountain View Cemetery, in Columbus, Stillwater County, Montana.