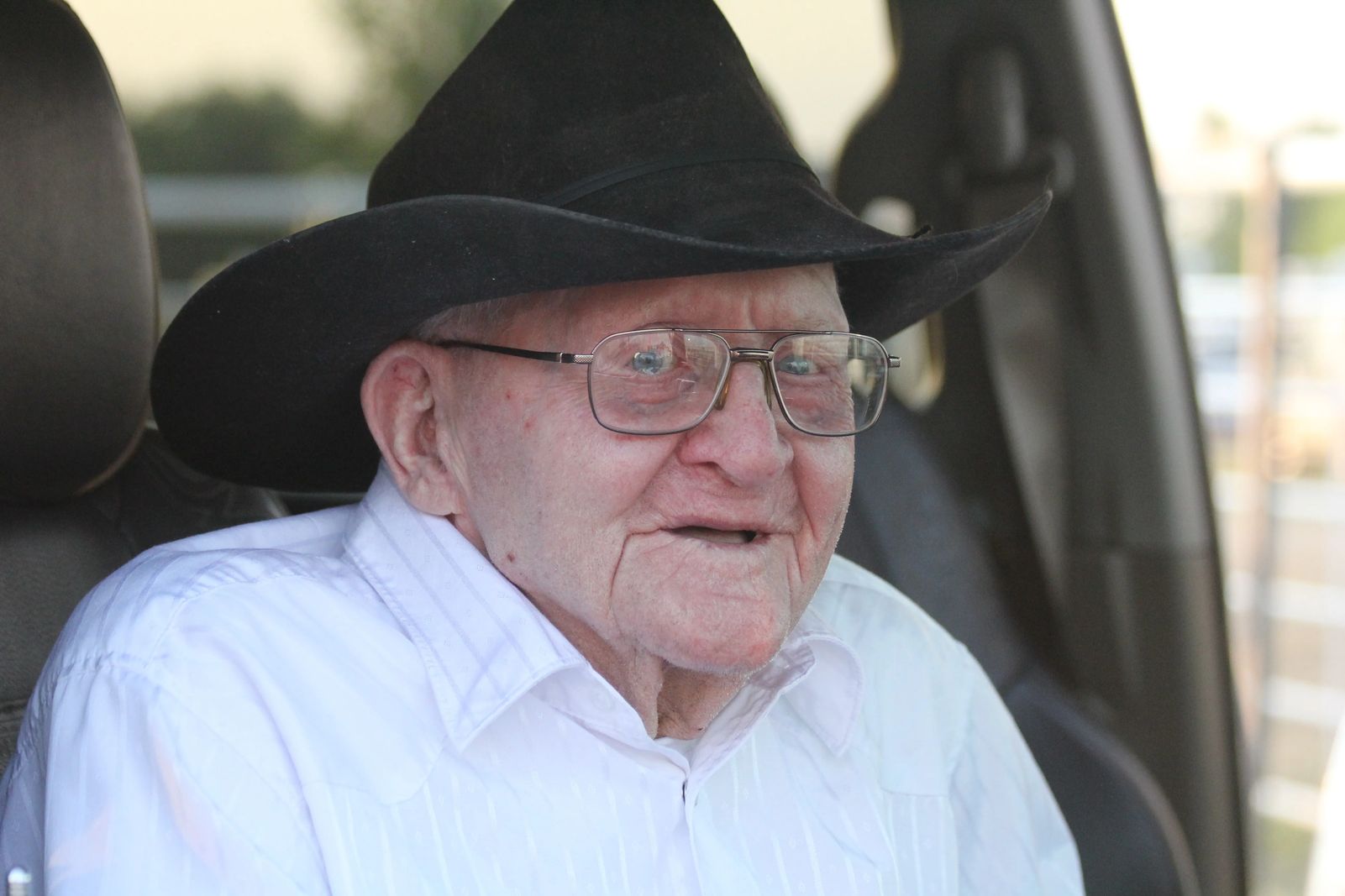 Miles “Bud” Geer was born September 18, 1921, to Henry and Jenny (Price) Geer at New London, Minnesota. His siblings included Meredith his twin, and a younger brother Jack. During the 1930s Henry got work on the Fort Peck Dam near Nashua and moved his family to Montana. At age 14 Bud became seriously ill with meningitis. The treatment in those days was to pack the patient in ice. When they did this, his infected ear ruptured and permanently affected his hearing. The illness affected his equilibrium so Bud had to learn to walk again. He claims that his understanding of horses helped him walk again as when he worked with or rode horses he focused on watching their ears, thus he focused on some item like the “horses’ ears” to walk toward.

After he graduated from high school he worked on the Nefzger ranch near Vida, Montana where he received more experience with horses. On November 12, 1944, Bud & Mildred (Habeck) Geer were married at Hingham, Montana. Mildred grew up at Rudyard, Montana and graduated with an elementary education degree. She didn’t care for teaching so took a job as the Railroad Depot Agent in Nashua. During this time Bud delivered beets to the beet dock in Nashua, hence the two started out working together in the railroad/sugar beet shipment businesses.

In 1948 the family moved twelve miles north of Nashua to the farmstead known as the Geer Place where they originally farmed and raised livestock. The first family home eventually became the chicken coop. Bud and Mildred’s six children included Bob Geer of Harrison, Dan Geer of Browning, Zane Geer of Havre, Joel Geer of Manhattan and Shelly Geer of Glasgow. In 1978, the family suffered a major tragedy with the loss of their youngest, Jeff Geer, who was killed in an airplane accident.

Beginning in the 1960s Bud began transferring the farm/ranch over to a rodeo stock business. According to Bill Blankenship when Bud was first in the Rodeo Contractor business he hauled the bucking horses Sargent Creek and Hobart to small rodeos to help the locals put on rodeos. Hobart, when not used as a bucking horse was Shelly’s saddle horse. Though gentle with Shelly the horse loved to buck out of a chute. Soon he put together 30 head of bucking horses that he leased to stock contractors.

By 1971 Bud and Mildred’s ranch featured a sizeable rodeo stock herd including horses, bulls, steers and calves for rodeos and accordingly became a stock contractor himself. Geer Rodeo Company furnished stock for rodeos throughout Montana. Their rodeo work was very busy from mid-May to mid-September. Bill Blankenship of Glendive and Jack Hinneland of Brockway worked as pick-up men and Pat Mather of Sidney was the bullfighter and clown. In the 1980’s Blankenship handled the contracts for the company. Bud’s daughter, Shelly worked as the rodeo secretary. As time went on Bud’s company expanded to 60 bucking horses, 20 bulls, 12 dogging steers, and 30 roping calves. During Geer Rodeo Company days some of the Premier Saddle Broncs they owned included Blue Shields, Bobby Brown, and Prairie Wolf.

In February 1981 Bud and his family suffered another major horrifying tragedy when Mildred was one of the victims in a triple homicide that took place while she was visiting friends in Poplar, Montana. William Norgaard was found guilty of murder at trial and hung himself while incarcerated in the Montana State Prison.

In a 1979 article in the World of Rodeo and Western Heritage Dianne Simmons wrote “Bud Geer of Nashua, Montana brought seven broncs to the American-Canadian Classic and was able to predict to a “t” how they would perform from the chute to the arena to the unsaddling pen. He could forecast with about 90% accuracy his broncs behavior.” Bud made it a point to explain to the cowboys the habits of how his broncs would act out of the chute. He says his honesty with the contestants helped them handle the animal for a good response and helped keep his string in good shape. As a result, his horses didn’t become broken or soured animals, but rather livestock that enjoyed bucking.

In a Glasgow Courier interview from 1983 Bud Geer described picking and preparing his bucking horses. As a former saddle bronc rider he trained his stock personally. He started bareback horses at age 2-3 then bucked them at rodeos until they worked up to saddle broncs. He remarked, “if they were still bucking good at 8 years old they could buck for us their entire lives.” He had a horse named Yellowstone who was still bucking at 36 years in 1983. He says, “some of the best bucking horses were the old saddle horses that liked to buck.” He kept the stock active all winter long to prepare them for the summer rodeos and kept an eye on them during the season to decide whether they should be bucked or rested during the next rodeo.

Bud Geer has a collection of newspaper articles, periodical stories and pictures of his favorite rodeo stock including favorite bucking horses, bulls, and rodeos. As a Stock Contractor he always carried around a little notebook and made a list of possible stock that might come up for sale. He worked under the premise that the success of the horse’s development is directly related to the rider on its back. Bud bought bucking horses he had identified in strings, saddle horses that bucked, and before he retired raised some of his own. When interviewed - Bud is most proud that he was always open and honest with those he dealt with, especially the cowboy contestants. He has documented proof in articles and publications from the 1970s and 1980s that “Geer knew his stock and his honesty with cowboys kept him working”.