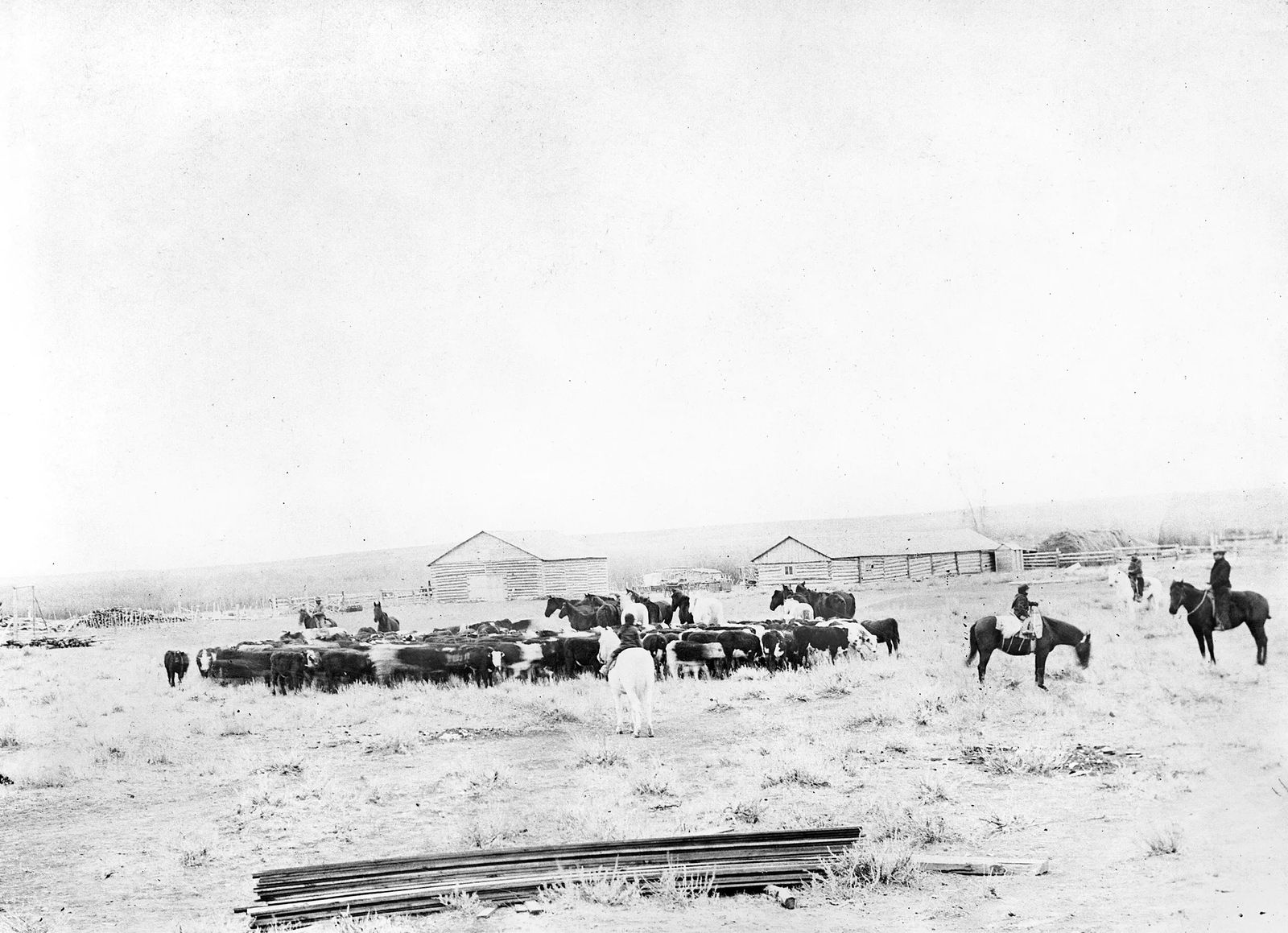 One of the oldest ranches north of the Missouri is the Circle C Ranch which was located just east and north of Zortman, Montana.

The ranch was formed by Robert Coburn who was born in Ireland. He had emigrated first to Canada, then to Montana where he started out at Virginia City and Alder Gulch in 1863. He mined for gold and other precious metals there. He moved to Last Chance Gulch in Helena where he held three claims that made him from $300 to $400 a day. That was Coburn’s stake to get into ranching.

“In 1886 he (Coburn) moved to the old D H S ranch at the foot of the Little Rockies where the Circle C outfit really began,” Guy Weadick said in an article from 1936. “He bought land there and ran his cattle, in the Half Circle C on the left ribs and thigh. His horses were branded Circle C on the left shoulder. They ranged from the Missouri on the south to the Milk River on the north and from near the Bear Paws on the west to the Larb Hills on the east. The Circle C sent reps across both rivers into the Bear Paws to work with the Bear Paw Pool and as far as the Shonkin near Fort Benton. They also had reps with the P Cross Square belonging to Milner, with the Circle Diamond along the Canadian border.”

In 1915 the Matador Cattle Company bought the home ranch on Beaver Creek at the foot of the Little Rockies and all the land, about 80,000 of patented land and some 20,000 other acres.

It is indeed fortunate that we can learn much about the Circle C from the published writings of Coburn’s youngest son, Walt:

Walt Coburn was born in White Sulphur Springs the year Montana became a state in 1889.

The family lived in Great Falls where Walt attended school and spent summers at the Circle C.

Through Walt Coburn’s writings we learn much about ranch life on the Circle C and much about famed ranch foreman, Horace Brewster who was said to be the best cowboy in Montana before he joined Major Logan who was the Indian Agent at nearby Fort Belknap as the first superintendent and chief ranger in the newly formed Glacier National Park.

Walt Coburn’s father wanted him to further his education by going to a mining and engineering school so he could help run the families mining interests in the Little Rockies. Walt’s brother wanted him to go to school to learn how to run the ranch. Walt said that he just wanted to be an outlaw like his hero Kid Curry.

Here is just one of the thousand stories told by Walt Coburn about his life on the Circle C Ranch.

It was July 3, 1901, and all that teenage Walt wanted to do was to go to Malta, Montana, and prepare for the Fourth of July rodeo. Instead his brother, Bob, gave him the ridiculous job that day of taking some horses up to the top of a butte and sitting there all day, then bringing them back in the evening if nothing happened.

Well something happened all right. In the middle of the afternoon Walt saw riders hurrying to him from way out on the prairie. When those riders got to Walt, they changed to the fresh horses and left Walt with the old horses before hurrying away. Walt recognized Kid Curry as one of the riders and knew they must have done something for which they needed fresh mounts immediately.

Walt took the tired mounts back to the home ranch. Bob got the cook to make Walt a steak and instructed Walt to stay with him in the ranch house. Not long later a sheriff and posse from Glasgow knocked on the door stating they were chasing Kid Curry and his gang who had just robbed the Great Northern Mail train at Wagner. The sheriff asked for fresh mounts and dinner. Bob Coburn said there would be no fresh horses, but his ranch cook would cook the men dinner for a dollar a man. Outrageous, but the sheriff said yes, so Bob sent Walt out to the cook house to wake up the cook and help in preparing the dinners. While preparing the dinners the cook said to Walt that he, too, thought the world of Kid Curry and that maybe they should slow that posse down. So they put something in the food that gave the posse diarrhea about five miles down the trail at Bear Gulch. Needless to say the posse never did catch Kid Curry and his gang.

Major Logan died after just two years on the job. After his death, the first order of business that the powerful Great Northern Railway did was to ask that Mount Coburn be renamed Mount Logan, for, you see, when Kid Curry and his gang robbed the Great Northern mail train at Wagner, they were riding horses with the Circle C brand on them.

The Great Northern would never forget.

The Circle C Ranch was one of the most notable early ranches in the area north of the Missouri.

Weadick, Guy. “Cowboys I Have Known.” Accessed via http://www.munseys.com.