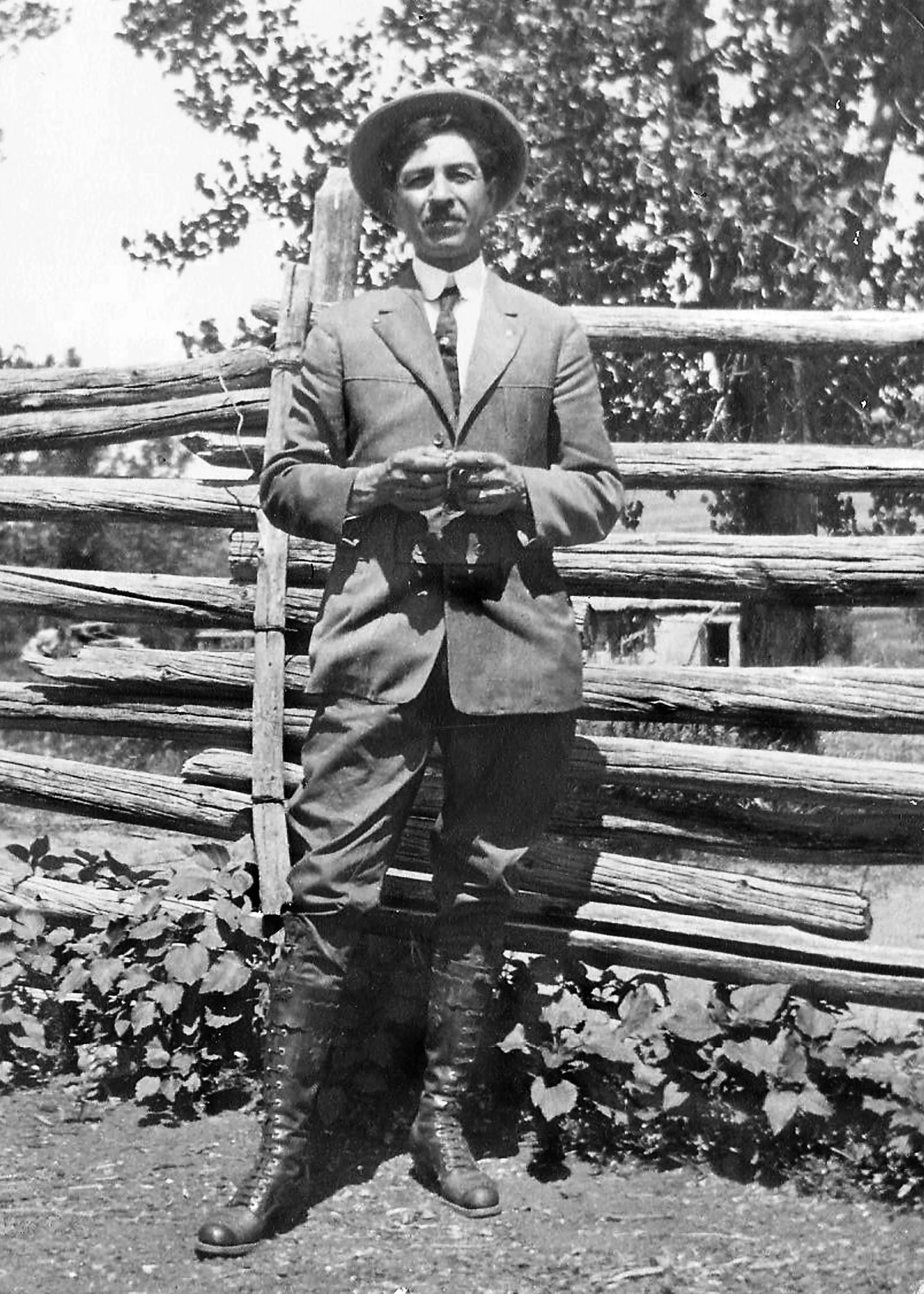 Along the Yellowstone in Eastern Montana, Kempton is one of the oldest and most well-known names. The Kempton ranch was established south of Terry, Montana by James Berney Kempton in 1880 to raise horses for the US Cavalry. Berney Kempton was born July 8, 1870, at his grandfather’s trading post, near Greely, Colorado. He was the eldest son of James B. and Mariah (Gerry) Kempton. Berney’s grandfather, Elbridge Gerry, was the first white settler in Weld County, Colorado. His grandmother was the daughter of Swift Bird and niece of Chief Red Kettle of the Oglala Sioux.

As ranch hands, Berney and his five brothers grew up on horseback. At the age of 14, Berney helped trail 1200 horses from Colorado to his father’s Montana ranch.

In the 1880’s version of “leaving home to join the circus,” Young Berney decided to use his skills and talents and join a Wild West Show. He followed the recruiters for Doc Carver’s Wild America Show from Montana to the Dakotas. Doc Carver was a sharpshooter and a rival of William Cody. Berney rode a wild stallion into a saloon, stopped his mount and rode back out. Depending on who told the story, it was either at Yankton, South Dakota or Fort Yates, North Dakota on the Standing Rock Reservation where he was hired to join the show in Vienna, Austria. He traveled the world as a performer, roping and riding. In St. Petersburg, Berney gave a private performance for the dowager Empress of Russia. While there, a Cossack horse that had thrown off an entire regiment was brought to the show. Kempton and another cowboy were able to ride him within minutes. The show went to Petrograd, Stockholm, Copenhagen, Hamburg and Berlin. In Berlin, the troupe gave a special show for the Crown Prince who later was known as Kaiser Wilhelm.

They left Europe and traveled to Melbourne, Australia, where they performed for five months. It was in Melbourne that Kempton roped a kangaroo, one of many that had been released into the arena. He inadvertently roped two kangaroos in one loop and the crowd went wild. Thinking this was part of the show, they expected this feat at each performance. It was memorialized in a “Ripley’s Believe it or Not” and a Cartoon that appeared in American newspapers. Kempton remarked that it was a much easier trick than roping wolves or antelope on the Montana range. During their long stay in Melbourne, Berney became good friends with a young Aussie, named O’Meagher. When the show moved on, the two young men agreed to name one of their male children after the other. Berney named his third son Gerald O’Meagher and somewhere in Australia there was probably a boy named Kempton.

After eighteen months of show business, the show reached San Francisco. Berney returned home to the ranch and the cattle and horse business established by his father. He bred excellent draft horses and found successful markets for them during the Boer War. His stock was considered some of the best at horse sales in Montana and beyond. It was year-round work to break the mounts they sold. Berney also trained horses for Steeplechase races and polo matches. Agents from the British and French governments came to the ranch to buy these well-trained horses and ship them to Europe.

Berney followed his father’s lead in ranching, which included a theory of dry land farming. The ranch raised record crops, including a type of corn that produced in 90 days in the semi-arid land. Berney continued the irrigation system drawn from springs that his father built. Because of this system, the ranch always had a flourishing vegetable garden.

In 1892, Berney married Flora Casper, and they had two children. They divorced and he married Martha Magnuson, a Swedish immigrant in 1909. They had five more sons. In 1913, Berney began construction of the 40-room Kempton Hotel in Terry. He operated the ranch in conjunction with the hotel and Berney acted as host to guests wanting a taste of life on a Montana ranch. There were many dudes from Minneapolis and Chicago who spent some time each summer working hard on the ranch and paying for the privilege. Sunday dinners in the large dining room and the enclosed porch were very popular with the guests and the locals. Folks came from neighboring counties for Sunday dinner and picnics where Berney regaled them with his charm and story-telling.

Berney was known for his gift of gab and quick wit. He was a handsome man, with thick black, wavy hair, and perfect posture. He was proud to let people know he was an enrolled member of the Oglala Sioux tribe of the Standing Rock Reservation. He dressed in a suit, tie and a trim-brimmed hat in all his pictures. He’d pull a lock of his thick hair forward so it showed under his hat. The artist, Charlie Russell, was a guest at a Miles City rodeo and Berney joined the town dignitaries in a reception committee. The bankers and merchants were clad in wooly chaps and twenty-gallon hats. Charlie said, “Well I see one real cattleman here,” and he shook Berney’s hand.

In his later years, Berney said he was glad he lived in the time of pioneers on the frontier. He also told friends and family that he wanted to die with his boots on. He said that if he ever felt himself slipping, he was going to jump out of bed, because too many of his friends died in bed. He got that wish and passed away suddenly on March 2, 1942. He died with his boots on sitting in the lobby of the Kempton Hotel in Terry.

Berney Kempton’s lifetime spanned a romantic period in the history of the American West. He was born in a frontier fort, helped show the world the mystique of the Wild West, and then did the work he loved.

Sources: Montana, Its Story and Biography: A History of Aboriginal and Territorial Montana and Three Decades of Statehood; by Tom Stout, Volume III; the American Historical Society, Chicago and New York; 1921; Pages 1369 – 1370.

Berney’s sons shared the stories of their father with their children who were born after he died in 1942.