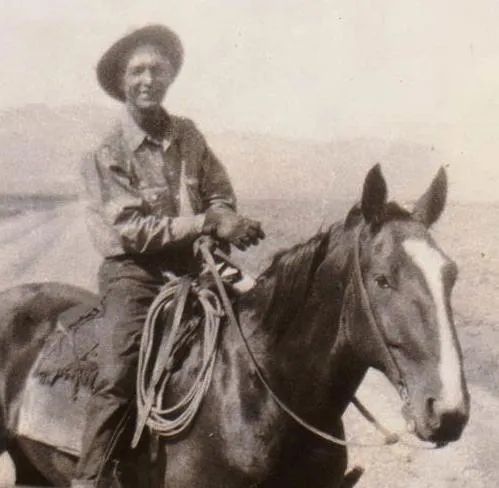 In 1881 Andrew and Anna (Johnson) Kannegard left Denmark and came to America. Not being able to speak or translate the English language they were mistakenly given Anna’s maiden name, Johnson. It would be some years later when the eldest children realized that their last name was incorrect and were able to ultimately change it back to Kannegard.

In 1888 Andrew and Anna moved west with their family to the Montana Territory, in search of the land of opportunity, before Montana was a state. Upon arrival to Montana the Kannegard’s choose a homestead site on Elk Ridge located in the North eastern part of the Bridger Mountains.

On January 19, 1893, Raymond Andrew Kannegard was born at the family ranch near Sedan, Montana. Raymond attended the Sage Brush School located in Gallatin County not far from the original homestead. He went to this school up to the eighth grade. Raymond had three full brothers Clark, Denver, Elmore and an adopted brother Harry Davis.

In 1914 Raymond worked as a freighter in the area. He had a six string mule team which pulled a grain tank which held 9000 pounds of wheat. He also pulled a trail wagon which contained 75 more bushels of wheat. Kannegard was quoted as saying “every driver carried his whip with his lines” however; “no good long-line man shook his lines at his horses, a la TV.”

In 1918 Raymond’s first wife Sadie passed away having succumbed to the flu during the epidemic. Raymond and Sadie had a daughter named Cleo. After a time Raymond moved on and married Dolly McNamer. They had three daughters Shirley, Dolly Jo and Alice Jane. Raymond and Dolly settled in the Sedan area where they ranched, raising cattle and American Saddlebred and Quarter Horses. He rode for his brand which was the Lazy Wineglass.

In the 1920s there were ranch rodeos held at the Woosley ranch and Raymond was the rodeo announcer.

Raymond was the quintessential cowboy. He understood horses, and had a special ability to know if a horse was going to be a good addition to the herd, or if it should be sent down the road. He was a quiet man that did not believe that a horse needed to be “broke”. Raymond in a sense was a true horse whisper of his time. He never believed in using a whip or striking a horse.

In the winter, to help supplement their income, he trapped beaver, mink, wolves and other fur bearing animals that were plentiful on their ranch. He even said that beaver were good eating. I guess we will take his word for it.

Raymond like most ranchers faced hardships. One that he talked about was when lightning struck his horse Connelly while he was checking his stock on the ranch. Unfortunately the strike was fatal to his horse. Raymond ended up in the hospital for a week . He was very fortunate.

Raymond loved riding his beloved horse Socks in many of the Wilsall parades on rodeo weekend.

Raymond was a voracious reader, and knew the history better than anyone I know. He used to tease everyone who read Zane Grey and Louis L’Amour books and would always tell them it would ruin them.

During his last years on this earth, Raymond was content to get in his trusty old truck with his dog Felix and go out to the Henry Guth Hereford Ranch. He would spend his day irrigating, tending to cattle, riding the horses and doing the many things that are needed to be done to keep a ranch going. He would take his shirt off about April so he could get a good “glow” and put it back on again in September. He did not fear the sun and the dangers that could ensue with too much exposure. He was from a different era. It was an era that we envy today. Neighbors looked after neighbors. Their lives depended on it living so far away from towns or cities. It could be harsh and unforgiving, but for Raymond and the other cowboys like him it was a land of freedom and being able to do what they loved.

Raymond was described by a neighbor, Edgar Rexroat who was a former Sedan resident, as “the last of the old time cowboys.”