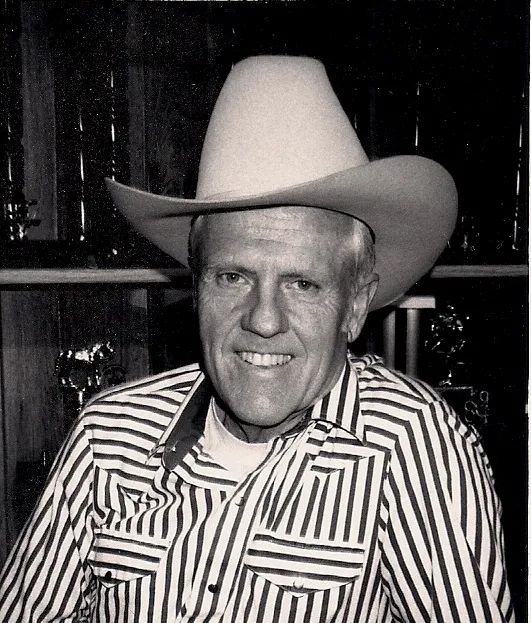 Keith William Herrin was born in Helena Montana on August 20, 1924, to Thomas H. and Marie (Clinkenbeard) Herrin. He was the fourth son in a family of five brothers, Harland, Winton, Gordon, and Wayne. The pioneer spirit was strong in all of the brothers, but especially Keith who had a deep pride in his pioneer ancestors, great grandfather Daniel S. Herrin of Lincoln who came to Montana in 1866 from Canaan, Maine, originally from Ireland. He was also the great grandson of Thomas Sanford of Canyon Creek, who came from Devonshire England in 1870.

Keith attended Warren School in the Helena valley and graduated in 1942 from Helena High. During the 1935 earthquake the Warren school was damaged. Keith and brother his Wayne attended school in a local bunkhouse. They soon became known as the Bunkhouse Boys along with Roy, Jim and Bob Morgan. Like many ranch kids of his era Keith rode a pony to school called Peaches. Recess was a good time as Keith would give a ride on his pony to whoever asked. This was a common theme with Keith throughout his life - always ready with a helping hand for anyone interested in horses and O-Mok-See.

Keith spent his youth working on the family ranch. Later he became a partner in the operation with his mother Marie and brother Gordon. The Herrin ranch was known for its polled Herefords and Dairy cattle. The ranch also produced large sugar beet and potato crops. Later on in life Keith would become responsible for managing large ranches in Wyoming, Missouri and Miles City, Montana. During his time in Missouri he worked as an AI Technician at the largest registered Angus ranch in Missouri. He then returned to Montana to manage a one hundred thousand acre ranch in eastern Montana, where he supervised thousands of acres of wheat production along with several thousand head of cattle. In 1976 he moved home to his beloved Helena valley as a representative for the Moorman’s supplemental feed company. He traveled within four counties and enjoyed the many lasting friendships he made throughout the years.

Keith was a soft spoken man and a good and kind listener; he made you feel as if no greenhorn question was too silly. He would listen carefully and then offer some well thought out advice. He was always ready to spend the time with you and your horse to fix whatever problems he could.

Later after he had retired he spent many hours a day volunteering at Mount Helena Christian Academy. His son Keith and daughter Heather attended school there as well as my son, Corbett Birmingham. Many days I would come in to find Keith and a young student including my son, heads together pouring over a reading assignment. The hours Keith spent working with my son, was one of the most generous gifts my family was given. Keith gave without expectation. True to the cowboy way he would turn his hand to whatever was needed, in or out of the arena. Keith was one of the founding members of the school, along with other local families wanting a better education for their children. In fact in the beginning he was one of the parents who had to build the classrooms and convert what was a garage to a viable place of learning.

Keith spent his life breaking, training and competing on horses. O-Mok-See (the art of pattern horse racing) was his lifeblood. In 1997 The Helena Independent Record published an article about the 50th MSCA Anniversary calling him Mr. O-Mok-See. What an apt title for he truly was Mr. O-Mok-See. The early years of the Helena Trail Riders functioned as a social and trail riding club, but by 1944 the club officially started the sport of O-Mok-See. The MSCA, founded in 1947 was supported by The Helena Trail Rider along with other Saddle Clubs throughout Montana. Keith fought many battles to keep the sport family centered and family friendly. The tradition of western tack and western dress was just one more way to experience the cowboy way and keep in line with the traditions that Keith loved.

Keith competed in the first Montana State Championship hosted by the Helena Trail Riders in 1948, and also in the MSCA 50th Anniversary Championship show in 1997. In his lifetime he may have missed a few state shows but they could be counted on one hand. Having undergone hip surgery in 1992 a mere six weeks later and he was back on his horse. Although unable to compete for a few more weeks he could be found at the arena with crutches in hand and a seat on the fence watching the crew set up for the day. Two months to the day of his surgery he was up and competing in events. Keith was the main driving force behind O- Mok- See in the state of Montana, and certainly with his dream of a National Saddle Club in the nation as well. In 1965 Keith was finally able to fulfill that dream of founding a National Saddle Club Association NSCA. He was elected to preside over this organization for three years. Keith still holds the records for the fastest MSCA Men’s Barrel and Stake time set 1981, the fastest Pole Bending time set in 1979. He also holds the National 2 Barrel Pole Race record set in 1987. Keith loved pattern horse racing, team roping and cutting cattle. Watching Keith ride was to the see the complete oneness of horse and rider. You were never sure who was having the most fun Keith or his beloved Traveler.

In the 1960’s and 70’s Keith became renowned for racing his horse against Jim Black around the barrels at the Last Chance Stampede, with Keith winning his fair share of races. These races were always received with thunderous applause and laughter. Many Helena people remember these races with a laugh, having never realized just who that wild cowboy was racing against Jim Black and his motorcycle.

Keith was a nine times MSCA champion, and National Champion in the men’s division of the NSCA in 1987. He rode in the events well into his 80’s. His legacy is carried on by his son, Michael Keith Herrin and his daughter Heather Schreibvogel, who won the Woman’s NSCA Championship in 2013, as well as several grandchildren.

Curt Synness wrote in his “Greatness Remembered” article in the Independent Record the following tribute to Keith “The late Keith Herrin (1924-2011) was one of Helena’s greatest Horsemen”.