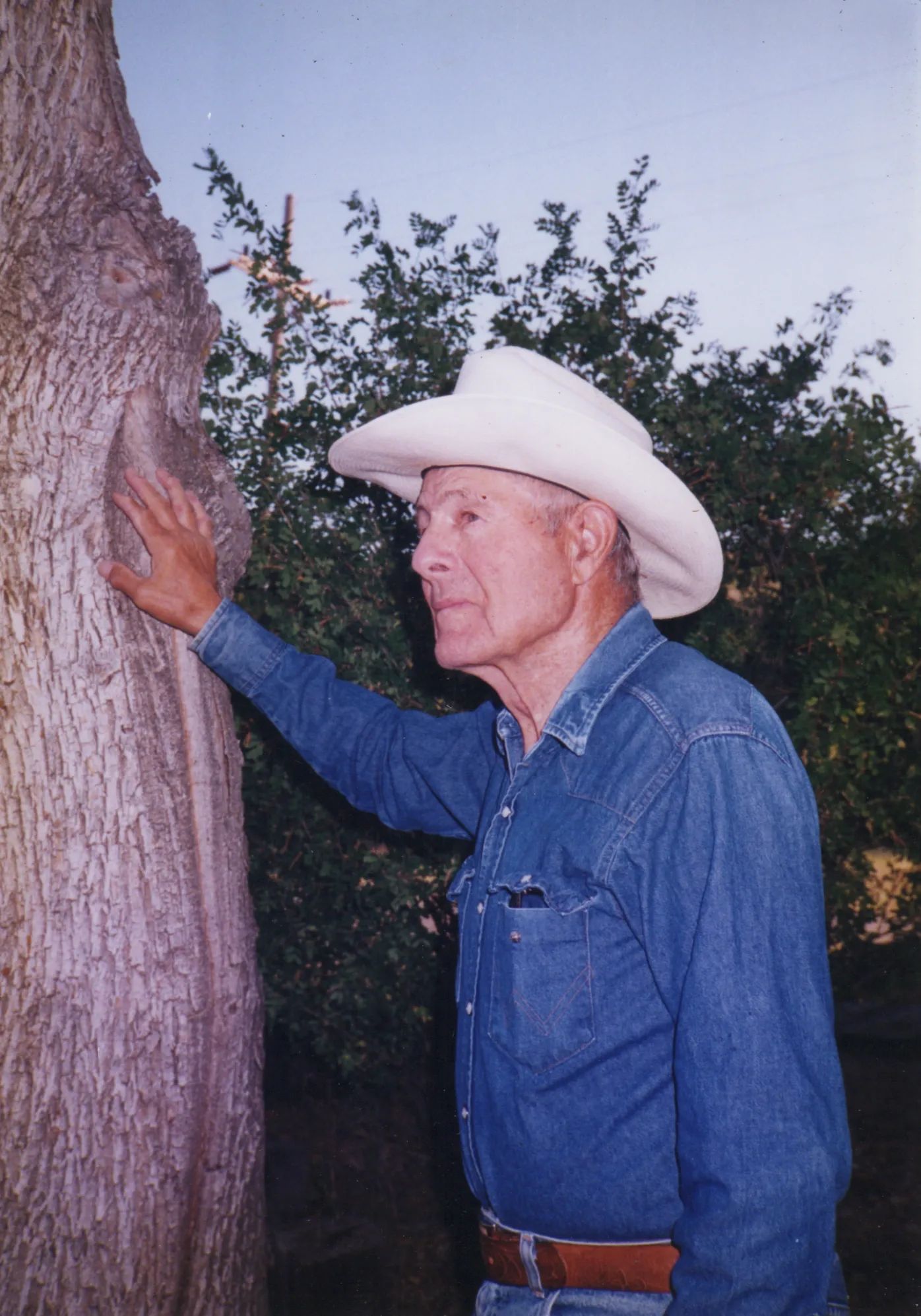 William “Bill” W. Lewis, a well-known cattleman, horseman, and gentleman, was born in 1916 to John Victor and Lena Lewis of Rothiemay, . As the eldest child, it was his responsibility to harness a team of horses to take his siblings 5.2 miles in a spring wagon to the Clara elementary school. During the winter months, heated rocks were wrapped in blankets and placed in a sled pulled by a team of horses to keep everyone warm. Since the was several miles from the ranch house, Bill milked cows and delivered milk to pay for board and room. He tells the story of being so cold that his fingers would not move very fast in typing class. Basketball was a favorite sport during high school and after. He so enjoyed the sport, that he became a referee at the same time his brother, Jack, was the coach and another brother, Edgar, was a team player which created some interesting moments.

After high school, Bill broke most of the work and saddle horses that were used on the family ranch for farming, haying, moving livestock, building dams, and transportation from place to place. A horse by the name of Prince, or sometimes called not-so-nice of names, was his favorite work horse because he always had get-up-and-go. Horses were used to create several dams to catch water run-off for cattle on the Lewis ranch. During the 30’s and 40’s, Bill Lewis of Clara was listed the champion earth fill dam builder using horses. According to Bill, these dam projects were a great way to break work horses. During the depression, no one had any money so the Lewis’s raised most of their food including eggs and chickens, milk and beef, pork and vegetables. When dryness, heat, and grasshoppers destroyed the crops, cattle were not shipped to market for two years. Bill and his brothers milked 12-14 cows in the summer and seven to eight cows in the winter to help provide a cream check for clothing, heat, and some food for a family of nine. Since cattle feed was short, Russian thistles were often cut and stacked.

Before being shipped to England as part of Fourth Armored Division of Patton’s Army at the Battle of the Budge in 1942, Bill was stationed in Pine Camp near Watertown, New York, where be met his wife-to-be, Dorothy Miller, at a United Service Organization social event. Bill’s mother, Lena Lewis, invited Dorothy Miller, a girl, to Lavina, M Montana, to become acquainted with the family and location before marriage in 1946. In 1945, Bill was seriously wounded in and flown to a hospital in England. After a short stay in , he was transferred to where he was hospitalized for one year before being honorably discharged from the United States Army. Bill received the Purple Heart as a reminder for gallantry and essential service.

During Bill’s first three years of marriage, he rode a horse ten miles round trip to the main ranch to help feed cattle in the winter months. It wasn’t uncommon for an unexpected blizzard to force the following of a fence line to get home.

As families expand, there comes a time when the main ranch can’t support everyone. Bill and his brother, Dave, bought the South Fork of the Flatwillow Creek Ranch in the Little Snowy Mountains in 1948 and the Buckler place near in 1952. Together they operated a very successful cattle ranch under the name of Lewis Brothers. Bill did extensive dirt work on the Buckler place, building dams, leveling hay bottoms, and building dikes for flood irrigation with a D-2 Cat. Since the mountain place was used only for summer grazing, cattle were trailed 45 miles across county from the Buckler place and back again in the fall for winter pasture. Bill would gather some wranglers and at 5:00 AM sharp, the round-up and trail drive was on the move. Dave helped deliver the meals, packed bedrolls, carried water, and planned the day’s necessities. Bill, on his horse, Flash, was the lead cowboy on the cattle drive during the day but spent most of the evening hours making sure calves and cows were paired up before the start of another day. The cow-calf pairs would take three days and the yearlings would take two days to reach the mountain place. The days were long, sometimes challenging, but the cattle always reached their destination. As years continued on, a camp wagon became a modern addition that allowed indoor cooking and sleeping. Bill’s daughters and Dave’s sons became the wranglers with the guidance of their fathers. The Lewis trail drives continued for 40 plus years until the purchase of a semi-truck and road improvement. Many lasting memories have resulted from the cattle drives such as run away horses, rain, cold, no showers, beautiful sun rises, breathtaking scenery, and Bill’s early morning wake-up call, “ Breakfast is ready.”

Bill was active in family, community, and state organizations. Since the was a high priority, he was president of PTA, an avid basketball fan, participated in school club fund raisers, supported teachers, and expected high achievements from his two daughters. He was a director of the Federal Land Bank and the Winnett Grazing District for many years. Other activities include active Stockgrowers member, life-time Mason, board member of Yellowstone Boys Ranch, 4-H Foundation supporter, member of , and attended most cattle auctions and bull sales. If the day was not over, he would take time to play a hand of bridge, pinochle, or pitch.

Cowboying is challenging in any circumstances, be it weather, calving, selecting replacement heifers, doctoring the sick, moving to another pasture, or marketing. Bill lived the western way of life by displaying hard work, courage, determination, self-reliance, honesty, and fulfilling a dream. Bill spent his entire life building a profitable working ranch with the idea that family will carry on the traditions. Now at 97, staring out the window of his new home, an assisted-living apartment, Bill looks out at the Little Snowy Mountains and says, “I’ve ridden those mountains many a times”.