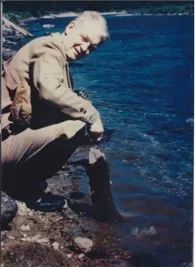 Lyall Sturgeon Crary was born April 9, 1908, in North Dakota. He landed in Choteau, Montana, from North Dakota in 1913 with his parents. His father, Dr. E.J. Crary, started a dental practice in Choteau. E.J. or “Doc” as he was known locally always wanted to come to Montana to be near the mountains and, hopefully, own a ranch someday. Lyall Crary's mother, Emily, agreed to the move if it would be to a town that could support a new venture she was interested in, a movie theater. She successfully operated the first theater in Choteau for 33 years.

An only child, Crary grew up in and enjoyed the small town atmosphere that, like his education in the field of medicine, would define his life in so many ways. Crary inherited his father's love for the mountains and all that they had to offer including hunting, fishing, and camping. He was compelled to return to the area to work summers for the U.S. Forest Service while attending college. His father, “Doc,” and Uncle Denzil McDonald built the “Empty Jug” cabin in 1928 on the West Fork of the Teton River. The cabin became a popular haunt for Crary and friends.

Crary attended the University of North Dakota, studying pre-med, and then went on to earn his doctor of dentistry in 1931, at Northwestern University in Chicago. In 1936, he graduated from the Northwestern medical college. While going to school in Chicago he met and married Charlotte Cornell in 1932. She was the daughter of a Presbyterian minister from Glencoe, Illinois, on the affluent north shore of Chicago.

Charlotte and Lyall Crary had two sons, Doug and Lyall Jr., while residing in North Dakota. To round out his medical education, Crary interned at Denver General Hospital. A daughter, Ellery, was born there. Following his internship, Crary moved his young family back to Montana. He worked at the Great Falls Deaconess Hospital for one year, before deciding to embark on his own business. In the late 1930s, he was able to get a little closer to his home town of Choteau. The Greenfield Irrigation project was in full swing with folks filling up the Bureau of Reclamation homesteads, many of them moving directly from Fort Peck after the completion of that enormous project. The “bench” needed a doctor so he started his own practice in Fairfield, Montana. In 1939, a fourth child was born, Ely J. to complete the family.

Dr. Crary soon became a household name in the area. He immersed himself in his work, dedicated to taking care of all who needed medical attention. He had a medical office next to his home and continued to make house calls when needed. Soon after starting his practice, World War II was declared. The government considered Dr. Crary “essential” for the medical treatment of the many families on the Greenfield Bench, the Sunny Slope homesteaders, and residents of the Sun River Valley. He saw many patients in his small office. They would often wait for their turn in their cars outside. Dr. Crary would continue working until the last car was gone, no matter what the hour. He would then make house calls or continue on to Great Falls to make rounds at the hospital, often not sleeping for 48 hours. His eldest son, Doug, would often drive the doctor to Great Falls so that he could catch a little shut eye. It was not uncommon for him to make more than one trip to Great Falls in a day. He delivered the lion’s share of the babies on the Fairfield Bench and Simms area, many in homes or in a car on the way to Great Falls. Once, he hit a deer and, although he was able to get a new fender, he couldn't spare the time to have it painted. He was easy to spot on the road.

Dr. Crary took all calls, even the 2 a.m. calls to stitch up drunks after a bar brawl. Irritated with the loss of precious sleep, the dedicated doctor would see the patient but was known to be stingy with the Novocain and looked for his dullest needles to do the repair work.

He had a vision to create a local hospital and was instrumental in helping to make Teton Memorial Hospital in Choteau a reality. He contributed to the promotion and fundraising to get this project off the ground and built a new clinic and apartment in Choteau in 1950.

Dr. Crary was a great advocate of education and provided financial help and encouragement for several area students. He considered the investment in youth and education a profitable one. Two of his own children, Lyall Jr. and Ely J., went on to become M.D.s with medical specialties.

With a thriving medical practice, a strong work ethic, and a dedicated passion to help people, Dr. Crary had limited time to do what he truly enjoyed, being in the great outdoors. He stole away to the Empty Jug when he could and frequented the Rocky Mountain Front west of Choteau to visit the ranch that his father, E.J., had purchased to fulfill his own dream in the early 1930s. The ranch was leased out and run by hired men until the 1950s when Dr. Crary's eldest son, Doug, expressed interest in running the ranch. Doug started running the cattle ranch and continued in this capacity with his wife Bonnie VanDeRiet.

Dr. Crary always had an appreciation for good horses and he favored the thoroughbreds. After much research and debate, he purchased a thoroughbred stallion and started a breeding and training program on the ranch that continued into the 1960s. His daughter-in-law, Bonnie Crary, who was then living on the ranch, recalls how he would be as nervous as a new father when his mares were foaling, even though he had delivered hundreds of babies.

He loved his work, the people who were his patients, and living in Montana near the Rocky Mountain Front.

On May 30, 1963, at the young age of 55, Dr. Lyall Crary died from complications of a massive heart attack. Some say that his many years of extreme over-work and dedication to medicine contributed to his early demise.

He would be proud that the ranch has continued as a working cattle ranch, run by his son, Doug and, upon Doug's sudden death in 1996, Dr. Crary's grandson, Dusty. Good horses, a strong appreciation for the Rocky Mountain Front, the continued operation of a traditional cattle ranch and frequent visits to the backcountry continue to run deep with the Crary name.

Dr. Crary knew the dedication and work ethic it took to be successful and had an appreciation for great places. He was a man of passion, enticed by the rural west, and it showed in everything he did.