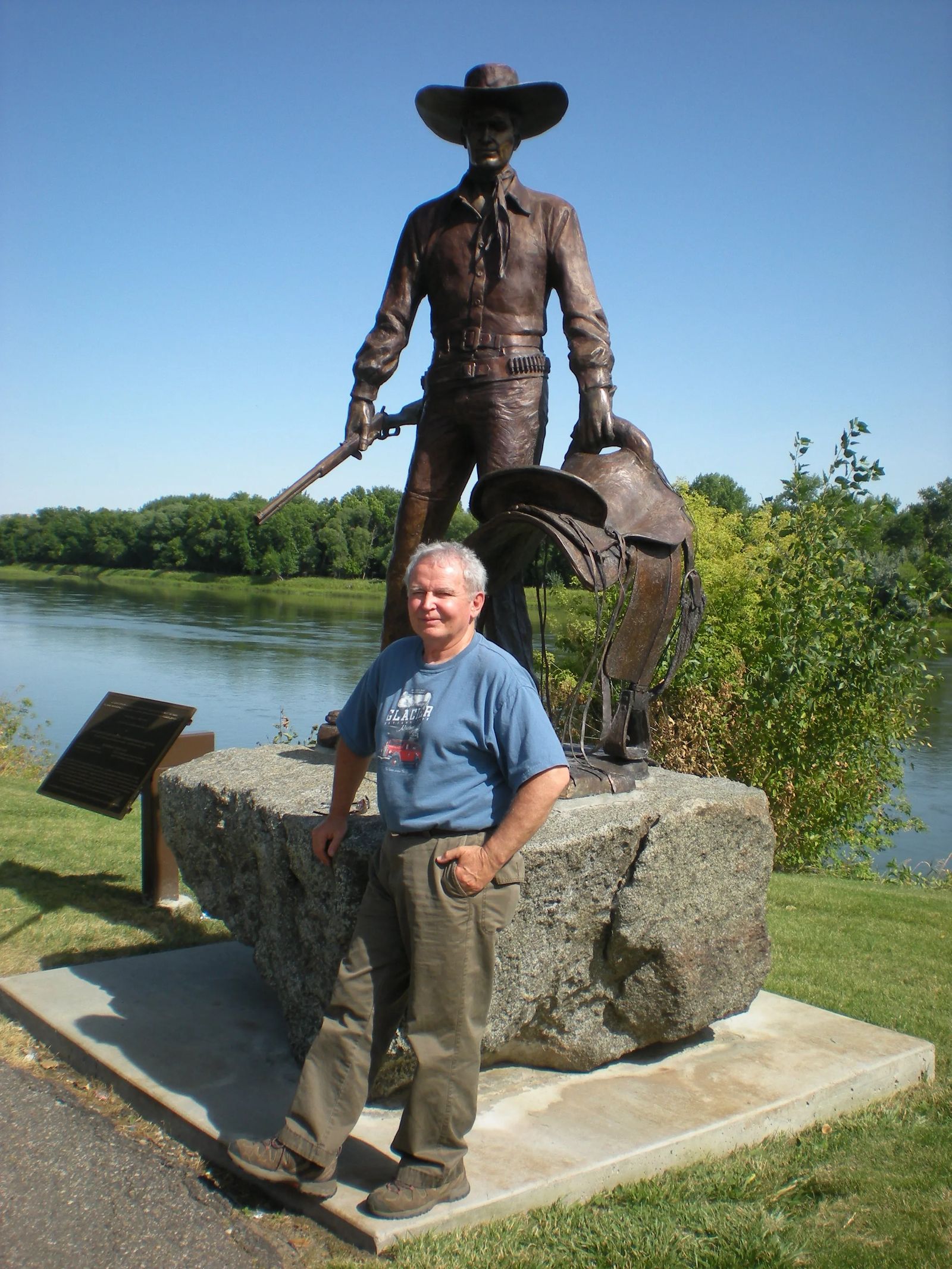 Gary Schildt, an enrolled member of the Blackfeet Tribe, has been an artist all his life and is noted for portraying Montana cultures in his artwork. He was born in Helena and grew up with his grandparents on their ranch in the shadow of the Rocky Mountains on the Blackfeet Reservation. He attended schools in Browning and Missoula and received his formal art training at City College in San Francisco. (Interestingly, he boarded with his cousin’s grandmother Belle Johnson in Browning who was the captain of the Fort Shaw Indian School Girls’ Basketball Team, 2013 Cowboy Hall of Fame and Western Heritage Center inductee.) After graduation from City College, he received a scholarship to the San Francisco Academy of Fine Arts, but instead, enlisted in the Army. Following basic training, he was placed in the Army Reserves and was able to return to the Blackfeet Reservation bent on using his art training to capture a way of life of the Blackfeet people which was fast disappearing. During those years he set up a studio at a hotel on Main Street in Browning, Montana and produced his “Reservation Series”, showing the everyday life of people living in a beautiful, yet harsh environment. The best known example of his work during this period was his painting entitled “Buttrey’s Bench” which depicted local people sitting and visiting on a bench outside the town’s grocery store. In doing this series Gary stated, “In art lies the preservation of the unique culture of the Indian world. One can write all the words in the world about the ‘old ways’, but the only way those ‘ways’ are truly preserved is by the artist’s renditions”.

After completing this series, Gary moved to Hungry Horse and set up a studio and bronze foundry where he fast became a rising star in the art world. He was an original exhibitor at the very first C. M. Russell Auction in Great Falls and continued to exhibit there almost every year until recently. He was a founding member of the Northwest Rendezvous of Art group and later painted with the Plein Aire Painters of America on Santa Catalina Island, traveling also with that group to Portugal and Mexico on group painting trips.

Not only is Gary a painter proficient in both oil and watercolor, but he is also an accomplished sculptor. He has owned three bronze foundries – two in Montana and one in Oregon. He was selected to do a bust of the late Senator Lee Metcalf which is displayed at the Lee Metcalf Building at the State Capitol. It was so realistic that the Senator’s widow stayed at Gary’s studio for several hours marveling at the likeness. He was also selected to do the busts of celebrity guests Denver Pyle, Hoyt Axton and Charley Pride for the C.M. Russell Auction, doing each one from “scratch” in the one hour allotted time. The Charlie Pride bust brought a record amount for the C.M Russell Museum during the biding, and Charlie Pride said it was the best depiction of him he had ever seen.

Gary has been a prolific sculptor, sculpting both human figures as well as wildlife. He did a series he called “Huck Finn” which showed the humorous and childlike side of the many Tom Sawyer/Huck Finn stories. Perhaps his most ambitious sculpting project centered on his cousin (through marriage) the movie star, George Montgomery. Montgomery, a native of Montana asked Gary to help him sculpt a heroic bronze of his former wife, singer and star Dinah Shore, to be placed on the 18th Hole at the Mission Hills Country Club in Palm Springs, California.

commemorating the fact that she began the first professional women’s golf tournament in America, known as the Dinah Shore Classic. After this was finished, George started on another heroic statute of himself in the movie role, “Riders of the Purple Sage”. Sadly, George passed away before this sculpture was barely begun and his wife and agent asked Gary to do the sculpture. The result can be seen on the shores of the Missouri in Fort Benton, Montana, referred to affectionately by the natives as “the Cowboy” His ability as a sculptor also resulted in several porcelain decanter series, including “The Lewis and Clark Series”, “The Custer Series”, and “The Montana Pioneer Series”. All the work was done in porcelain factories under Gary’s direction in Japan and Taiwan. These decanters, commissioned by Alfa Industries of Helena, Montana can be found in collections all over Montana.

His most ambitious painting project to date has been forty-three paintings of the Blackfeet Medicine Lodge Ceremony or “Okan” and more commonly known as the Blackfeet Sundance. He is the first and only Indian Artist and member of his Tribe to do a depiction of this most important ceremony. This exhibit is on permanent display at the C.M. Russell Museum and is an impressive example of both the entire ceremony and Gary’s very formidable talent. As a result of this exhibit, as well as his other body of work, Gary received the 1999 Montana Governor’s Award for the Arts and then judged the 2000 awards. There is also an award winning (Public Broadcasting System) twenty-seven minute documentary video of this series of paintings entitled, Okan – Appeal to the Divine.

The Montana Historical Society Museum in Helena commissioned Gary’s considerable talents for two of its permanent exhibits – Montana Homeland and Neither Empty or Unknown. The former series contains three of Gary’s paintings and begins the exhibit with the crossing of early man across the land bridge into Montana. The area around Duck Lake near St. Mary’s on the Blackfeet Reservation is the locale for the painting and will be easily recognized by every Montanan. The latter exhibition also contains three of Gary’s paintings, including a very large 12 x 7 feet painting of a Blackfeet scene entitled “Trading for the Bride”.

Gary’s art accomplishments over the years have been many and varied as have his awards and accolades. He has had one man shows at the C.M. Russell Museum in 1966, 1979 and 1980, at the Willoby-Taush Gallery in San Francisco, at the Montana Historical Society, as well as exhibiting at the National Sculpture Society in New York City in 1980. He won numerous awards through the years at the Northwest Rendezvous in Helena. He was the first guest artist at the initiation of the Indian Art Show in Great Falls and his work with this show assisted young Indian artists to develop their talent and open markets for their work.

Gary has never been propelled by financial gain, but rather by the art itself and his quest to bring, through his talent, his renderings into being. He has followed the advice of his art professor who cautioned him that those artists who dabble in technique have nothing to say. His has been on a path of always saying something, and his sensitivity and artistic excellence have been evident throughout his career. Gary is a true Native Son in every sense of the word and his work has brought both pleasure and illumination to every subject he has painted and sculpted. He can still be found, now in East Glacier, working on his next series on the Napi Stories, a collection of the legends of the Old Man of the Blackfeet which always carry a life lesson.

The career of Gary Schildt and his artistic achievements would shine in the Montana Cowboy Hall of Fame and be truly honored to be among the Greats.