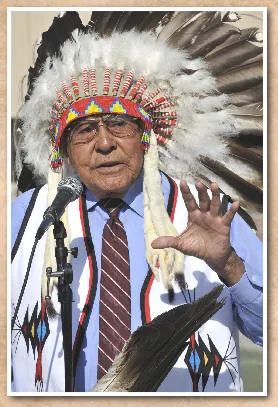 Earl Old Person was born April 15, 1929, to Juniper and Molly (Bear Medicine) Old Person. He is a Blackfeet Tribal Member who grew up in the community of Starr School and spoke only the Blackfeet language until he entered school. He attended grade school at Starr School and graduated from Browning High School. Old Person was married first to Virginia Whitegrass. They had one daughter, Earlina. He later married Doris Bull Shoe who had four children by a previous marriage; Alfred, Marty, Glenda, and Rose. Together Earl Old Person and Doris had one son, Earl, Jr. They also raised a granddaughter, Twila. Doris is now deceased.

Chief Old Person, also known as “Cold Wind” or “Charging Home” is a humble man with a deep sense of spirituality and deep commitment to the Blackfeet people. He was an outstanding basketball player, a gifted runner and an accomplished horseback rider who owned and trained race horses. Old Person recognizes one of his greatest honors as having taken place in 1978 when the family of Two Guns White Calf bestowed him the position of Chief of the Blackfeet vacated at White Calf‘s death. Old Person has served as an elected leader of the Blackfeet Tribal Business Council for 54 years as a member of the Blackfeet Tribal Council serving 34 of those years as chairman.

Chief Old Person holds valuable knowledge of Blackfeet history, songs, dances and ceremonies and stresses the importance of preserving and maintaining the culture. He is called on for many tribal ceremonies and celebrations in the United States and Canada. He takes the time to listen to others and reacts with the wisdom of one who has had a lifetime of rich experiences on which to draw. He has always quietly taken the high road by following legal and ethical channels to bring about positive change. He has spent his lifetime holding himself to tough convictions and high standards as demonstrated by his ability to lend a voice of reason in highly charged situations.

The following is a listing of some of Chief Earl Old Person’s achievements, awards and honors:

In 1936 the Browning High School Basketball Team won their first trip to the State Tournament in Great Falls and Earl presented Blackfeet songs and dances at half-time.

In 1938 at age nine he spent six weeks in Cleveland, Ohio and New York City furnishing Blackfeet song and dance presentations at schools, colleges, and civic organizations. The proceeds were donated to assist in the building of a local church.

In 1947 he was the only Indian Scout selected to attend the 6th World Boy Scout Jamboree held north of Paris, France.

As a young man he worked as a laborer for the railroad. In the early 50s he worked at the Plains Indian Museum, then as a clerk-typist and interpreter for the Blackfeet Tribe.

In 1954 at the urging of the Tribal Elders he ran for and was elected to the Blackfeet Tribal Business Council.

In 1959 he worked as an Attaché in the State House of Representatives and held the distinction of being the first full-blood Indian in this capacity.

In 1967 he was elected and served for five years as President of the Affiliated Tribes of the NW including Idaho, Oregon, Washington, Northern Nevada, Alaska & Montana.

In 1969 he was elected and served for two years as the President of the National Council of American Indians. He was also voted Outstanding Indian of the Year by the Chicago Indian Council.

In 1970 he was appointed to the National Council of Indian Opportunities.

In 1971 he was selected as a member for the Indian Banking Committee and as one of five board members to establish the American Indian Bank, Washington, DC.

In 1978 he was invited to the Canadian Commonwealth games in Edmonton as a guest of the Queen where he met with the Royal Family and Prime Minister Trudeau of Canada.

In 2009 he was featured as one of the Great Falls Tribunes top 125 Montana newsmakers during the previous 125 years.

In 2011 he was recognized as one of Montana’s most influential politicians and activists in the 20th century.

He serves or has served on several boards including:

The Montana/Wyoming Intertribal Leadership board

The University of Lethbridge, Alberta, Canada

In 1971 the Shah of Iran, Mohammad Reza Pahlavi, arranged and hosted the 2500 year Anniversary Celebration of Cyrus the Great’s establishing the Persian Empire. Old Person was invited to attend through President Richard Nixon. Old Person describes his part in the event as follows: He reported that after arriving in Tehran he was invited to the high tea and thus dressed in his Blackfeet Regalia. Through an interpreter Old Person was asked to give a small talk. So he stood up and asked the Shah to join him. The Shah promptly got to his feet and stood beside Old Person. When Old Person started to speak he noted that nearly the entire audience was smiling so he began to worry and cut his speech short. Later Old Person asked the interpreter if he said or done something wrong. The interpreter assured him he hadn’t really done anything wrong but that as far as he knew no one in the previous 2500 years had asked the Shah to stand up.

Old Person is an esteemed orator who has an unrelenting dedication not only to the Blackfeet but to Native people throughout the Nation. He continues to strive for positive change in areas such as education, economics, health, and environmental and social issues. He is a kind and gentle man who is comfortable in the company of the highest of dignitaries as well as the most common people.

Wikipedia, Montana’s Most Influential People in the 20th Century