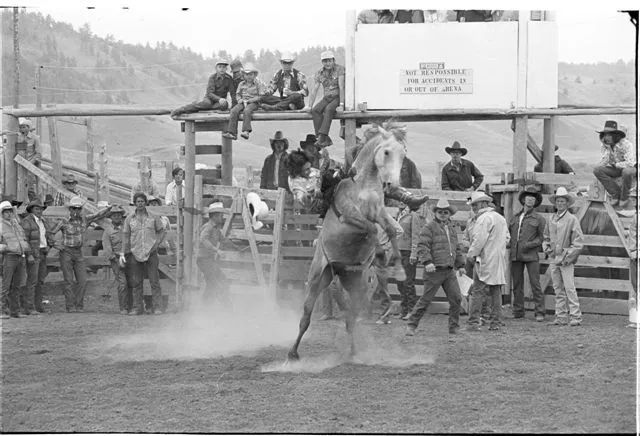 For years and years in this part of Montana there was only one place to be on the Fourth of July and that was the rodeo at Warrick.

There were hundreds and hundreds of spectators, hundreds of participants, numerous fights and one of the best dances Fourth of July night saw in all of Montana. Matter of fact the entire Fourth at Warrick was not to be missed year after year by many Montanans.

Warrick, Montana, is located in the heart of the Bears Paw Mountains about 39 miles south from Havre, Montana.

The first Warrick Rodeo was held in 1927. The last one in 1984. Sometimes the rodeo went dark for several years but then someone would always get it up and running again. Spending the 4th of July at Warrick rodeo was like a rite of passage for many a Montana young person, along with older ones, too.

A 1984 program for the rodeo gives a history of the event:

The first rodeo in the Warrick area, but not at the present site was about 1927. It was held on the Weaver ranch. They had a corral but no chutes. They roped horses out of the corral, blindfolded them, saddled, got on and rode them out in open country. They had a dance in the hayloft of Weaver’s barn that night.

They built the first arena on an old Indian campground. There are still about fifteen tepee rings below the arena. They always have Indian cowboys competing at the Warrick Rodeo. A person wonders if over 100 years ago some of their ancestors camped there and what the scene looked like at the time.

There is no grandstand or bleachers at Warrick. There is a hillside, part of which is kept free of cars for people to sit. On the rest of the hillside people park their cars and can watch the rodeo from the car. The thing about Warrick Rodeo is you don’t have to sit in one place. You can walk around and visit. Many people come the evening of the third and camp out by the arena. They take in the rodeo and dance on the Fourth, and go home on the fifth. Ice cold beer and concessions are sold at the rodeo and dance.

Warrick was always a place where young cowboys got their start.. Many of them went on to do very well in larger rodeos. Buck Boyce rode at Warrick in the ‘40s. He went on to win first place at the Calgary Stampede in the bull riding of 1955. Boyce was also a director for bull riding of the Professional Rodeo Cowboys Association for two terms in the early ’50s. Larry Kane went on to be rookie of the year in the PRCA in 1960. Larry was one of the top saddle bronc riders in the nation. Jack Nystrom, National Finals Rodeo bronc rider also got his start at the Warrick Rodeo.

The Warrick rodeos ended in 1984 because their long-time stock contractor Bud Geer could no longer supply stock and a proposed stock contractor would charge around a $1,000 more for contracting the stock.

Bud Boyce recalled that there were area rodeos before 1927 held at the Hockanson’s ranch and the 1927 rodeo was at Weavers. The present rodeo grounds located at the Boyce Ranch came later. No one would chance to guess as to how many spectators showed up. Bud Boyce said that one year so many had camped out that he took off his hat and just went around collecting fees.

Oh, goodness, but there were fights. Who had the worst one is a matter of who witnessed which one. Few were ever fought at the rodeo. It was at the dance or before that tempers, awash with Budweiser, often times got interesting.

Then there was the dance, usually put on by a social organization called the Bear Paw Belles who would hire local musicians.

Only one fatality occurred during all those rodeo years. In the early 1950s a cowboy was riding a horse. The horse and rider went to the end of the arena and over a fence and landed in the middle of other horses. The cowboy was killed.

One year folks at Rocky Boy’s Indian Reservation decided the rodeo was making too much money and charged a fee to go through the reservation on upper Beaver Creek. Most rodeo goers not wanting to pay a road fee as well as a rodeo fee went around by Clear Creek that year.

Disaster struck one year. With hot, dry weather, the arena was dry as a bone, so Bud

Boyce set his irrigation sprinklers in the arena to wet it down. Then there was a cloud burst, so the day of the rodeo the arena had so much mud that people couldn’t lift their legs out of bottomless bogs of goo. Bud Boyce said he was not a very popular guy that year.

Fourth of July has been pretty quiet since the Warrick Rodeo days ended, but they live on in the lifetime of memories made by all those who attended them.