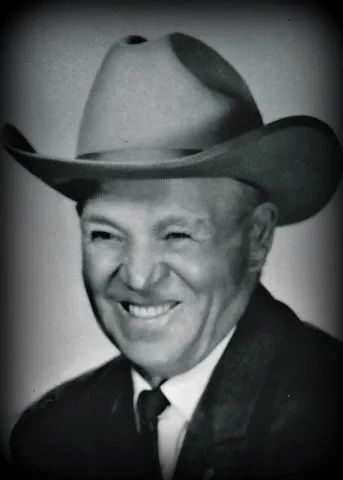 John Henry Gilman was born November 26, 1903, at his grandfather, C. D. Newbary’s, ranch. His parents were Lorin and Adele Newbary Gilman. He was the oldest of eight children.

He was named after an old cowboy, John McNaire. To celebrate “Johnnie’s” birth, John McNaire gave him a little sorrel filly colt. This filly gave him many colts through the years. The last one was Silver, who he still had when he got married.

Johnnie attended his first seven grades in Ekalaka, staying with family friends. When a school was built two miles from the family ranch, he finished the eighth grade there. He did not attend high school. As a child, he spent his summers at the Newbary ranch helping ride and doing other ranch work. He began his cowboy career as a teenager, helping ranches with riding and whatever needed to be done. One day, when a bunch of young men were done for the day, they decided to race the horses. Johnnie fell in a hole, and sustained a head injury. The cowboys gathered him up and took him to his family. He was in a coma for several weeks. His mother lovingly took care of him, and thankfully he recovered. His youngest sister remembered at first, he could not talk or walk and had to crawl for a while but slowly regained his strength. As the story goes, no doctor was summoned for care.

When he was fully recovered, he began his cowboy career again riding for ranches. When shipping time came, he helped drive large herds of cattle to Miles City, Montana, to be shipped out on the railroad. On one of these trips in the 1930s, he rode along with the cattle to help feed and water them on the long trip to Chicago. He came back with two medals on leather straps; one reads “Walter Dunbar, the house that gets good prices” and on the back is “Union Stock Yards”. The other one reflects, “Montana Steer - $8.50”.

In the spring of 1931, there were wild horses running in the area, so it was decided they should be gathered up. This was between the Timber and Alkali Creek area. Jimmy Drake made a deal with people to buy the surplus. Johnnie agreed to organize the roundup and split the profits. The roundup started at the Billy Hickock ranch and ended at the Fred Speiser place. Hundreds of horses were gathered up and delivered to J. M. Venable, who was the buyer for the packing plant in .

Johnnie met Gertrude Syverson when she came to Montana from Minot, North Dakota, to teach school at the O’Fallon School by the Gilman ranch. They were married on November 25, 1938, in Miles City, Montana. To this union three daughters were born, Gloria Ann, Mary and .

Some of the ranches Johnnie worked for were the LO Ranch, McNierny Ranch, Mallet Ranch, SH Ranch, Tooke Ranch, and his brother, Colin Gilman’s ranch.

Johnnie was a true horseman; he trained horses in a gentle way so they very seldom bucked with him. When a horse did decide to buck, he could sense what was coming and got them under control before anything could happen. Most of his injuries were from horses falling on him.

Johnnie lived in an era much different than now. Everything cowboys did had to be done on horseback--- there were no four-wheelers back then. Johnnie worked in as a young man, and later, he mostly worked in . He lived all his life in except one year when he and his wife went to to work for Jack Peila. Jack had sold his ranch on Moon Creek, and he asked Johnnie and Gertrude to come to . Johnnie rode for him out there, but this was desert country with tall sagebrush, so one year of riding in the desert was enough. He was quite the tourist attraction riding with his vest and chaps. Johnnie had his picture taken many times.

He continued to work on ranches. The last ranch he worked on was his brother, Colin Gilman’s, ranch. Johnnie had a heart attack that summer, and after that, he could not work full time anymore. When he recovered, he did some riding helping with fall roundup of cattle and with brandings. He liked to rope and could still rope when he was in his seventies. His last job was working one to two days a week at the sale yard. This way, he got to ride---old cowboys never give up their love of riding horses.

Johnnie was not baptized until he was in his fifties. He always said, “The good Lord has baptized me many times.” But his wife thought he should be formally baptized, so they asked Reverend John B. Fritz at the Presbyterian Church in Miles City, Montana, to baptize him. He became a member of the church.

He was a member of the Range Riders Museum in Miles City and liked to volunteer there.

Johnnie and his wife had many friends. After they retired and moved to , they had daily visitors, sometimes as many as three or four different ones a day. Johnnie and his family lived in a good time. Johnnie’s family thoroughly enjoyed their life living on different ranches; his daughters loved riding with their dad.