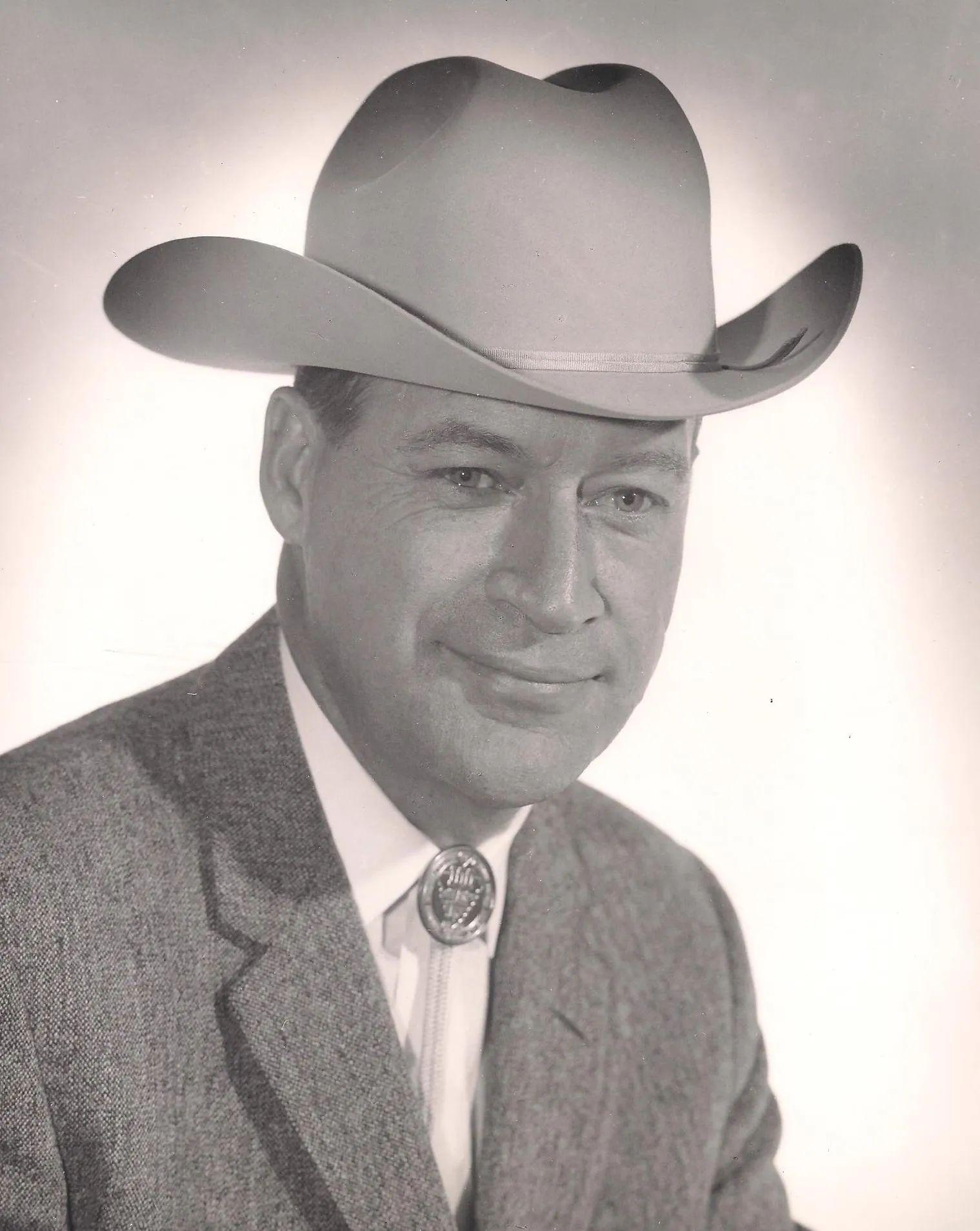 Tim Babcock was named Milford Babcock when he was born on October 27, 1919, in Littlefork, Minnesota, to Erwin and Olive (Rinehart) Babcock. He was nicknamed “Tiny Tim” by his aunt and soon outgrew “Tiny” but “Tim” stuck to him for life.

His parents had moved to Montana and married in Glendive in 1910. They had answered an advertisement in a Minnesota newspaper offering 160 acres of homestead land located at Crackerbox Creek in Dawson County. Their first two children were born in Montana; but after nine hard years of drought and low agricultural prices, and with their family encouraging them to return to Minnesota, they did so. They found that times were even tougher in Minnesota, so they moved back to Montana in the spring of 1920 when Tim was six months old. He was raised on the homestead that they had lost, which had been sold to a friend for taxes. He played on the banks of Crackerbox Creek as a little boy and grew up to work on the farm - plowing, tilling and sowing grain and corn – all with horses. Tim had several horses of his own and broke his first colt when he was just eight or nine years old.

Tim worked on the spillway for a few months during the construction of the Fort Peck Dam, by fibbing about his age, as the workers were required to be eighteen to be employed. His parents made him return to high school and he graduated from Dawson County High School in 1939. While he was in high school he learned to play the saxophone and developed a little jazz band that played for local dances. After graduation, Tim headed for California with a cousin and friend but soon discovered that life was not as easy as he thought it would be and found himself going door to door selling pots and pans. He eventually got a job at Douglas Aircraft in Santa Monica.

Tim married his high school sweetheart, Betty Lee, on September 21, 1941, in Las Vegas. Tim and Betty became the parents of two daughters, Lorna and Marla. (Marla is deceased). They have five grandchildren and 13 great-grandchilren.

When Pearl Harbor was attacked on December 7, 1941, Tim thought he would be called to war immediately but learned that his job of building airplanes at Douglas Aircraft was essential to the war effort and was deferred at that time. However, six months later the war had escalated to the point that the War Department called up all men under the age of 26. Tim wanted to go and be a part of the war effort. He sold their home in California and took his wife and baby back to Glendive, Montana. After serving in several stateside duties, Tim shipped out of Boston Harbor on December 12, 1944, on the U.S.S. Wakefield. He was part of the 2nd Battalion, E Company, 394th Infantry Regiment, and 99th Infantry Division and fought in the “Battle of the Bulge.” He captured a German officer and was awarded a Bronze Star for heroism at the Remagen Bridge.

After returning from the war, Tim’s father-in-law offered to sell him a partnership in his oil trucking business and the Babcock and Lee Truck Line was born. The trucking business prospered and in 1947 the U.S. Government hired the Babcock and Lee Truck Line to haul material from Great Falls to Alaska on the Alcan Highway. They had clients all over Montana, so in 1951 Tim bought his first airplane and learned to fly.

Tim was elected state representative from Custer County in 1952. He lost the election in 1954 by 38 votes but came back to win the House seat again in 1956 representing Yellowstone County. The truck line continued to flourish and Tim purchased the Partington Truck Line, which provided him with the MRC statewide authority he needed to haul petroleum products for independent private businesses and/or any government body.

In 1959 Tim was asked to talk to Don Nutter about running for Governor. Nutter agreed to do so only if Tim would run for Lt. Governor - they won the election in 1960. Tragedy struck on January 25, 1962, when the Governor’s plane crashed eight miles southwest of Wolf Creek. Governor Nutter and five other men were killed. Lt. Governor Tim Babcock was then constitutionally placed into the office of Governor. He won the election in 1964 and served as Governor until 1969.

Tim represented Montana at several special events during his tenure as Governor, the first being at the World’s Fair in Seattle in 1962. On January 1, 1964, the Montana Territorial Centennial was kicked off at the Pasadena Rose Parade. Montana’s float depicted a huge Indian feathered headdress made of flowers, which won third place in the parade. The Montana Centennial Train left Billings on April 5, 1964, and made fifteen stops on the way to its final destination in New York. Tim was able to attend all the special events that were planned along the way. When the train reached Washington D.C., Tim rode horse back in the parade down Pennsylvania Avenue. Monte Montana brought his horse into the hotel on the elevator so they could perform during the banquet. They were greeted by President Lyndon Johnson in the White House Rose Garden.

Tim was instrumental in the launching and success of the American Indian Institute, which was chartered in 1973. The Institute works with Native Americans to help them maintain their cultural and spiritual heritage.

Tim purchased the famous Ox Bow Ranch in 1978 and went into the cattle business. He also raised Thoroughbred horses on the ranch. He enjoyed his life as a Montana rancher for twelve years. The Ox Bow became a very big part of the lives of the entire Babcock family.

Tim began his life in humble circumstances, but he is a tribute to what a person can accomplish in their lives with perseverance and resolve. He has given his life “For the Good of Montana” and has garnered the admiration and respect of Montanan’s of all persuasions throughout the decades he has served. He is truly an “Ambassador” for the citizens of the Great State of Montana.