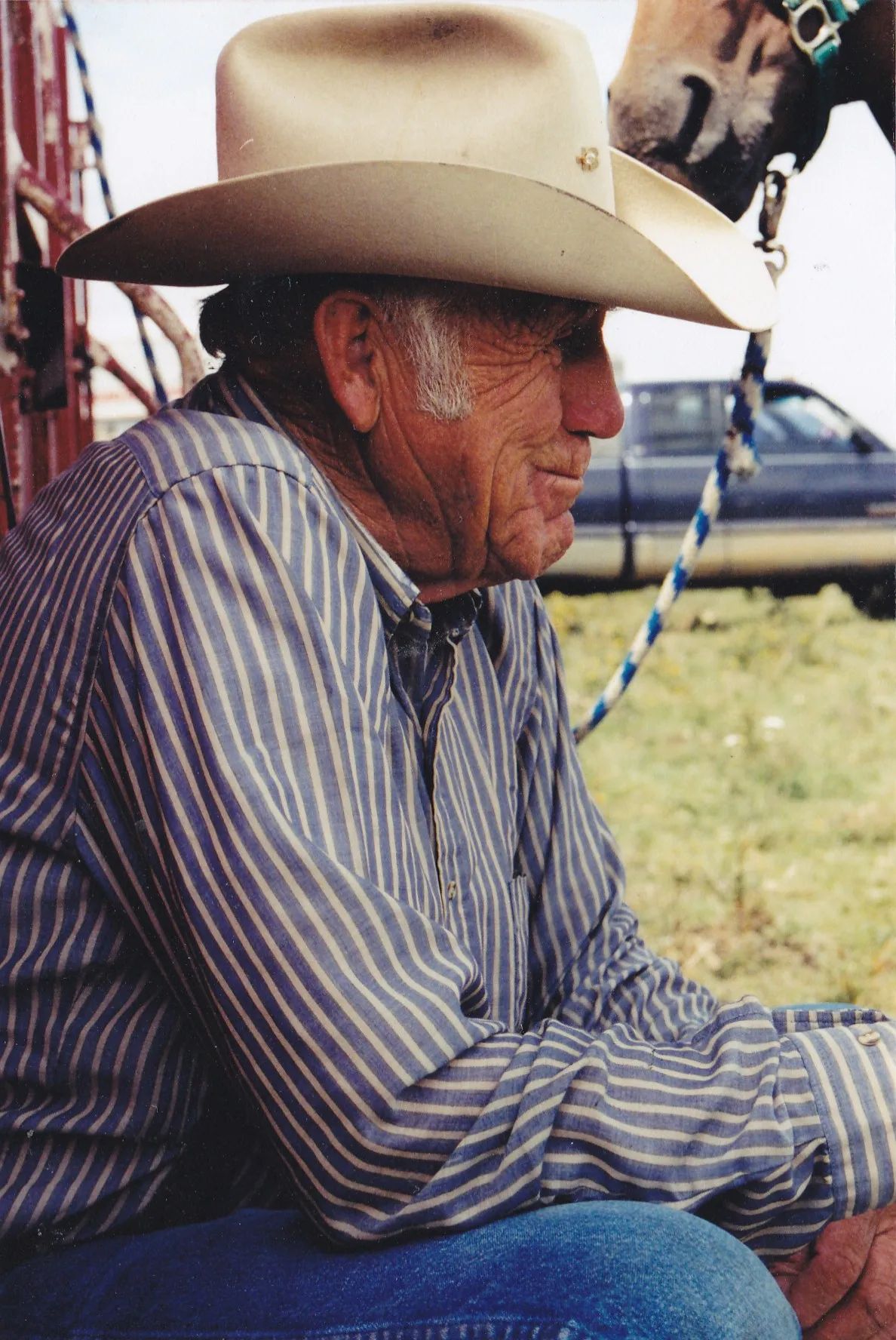 Raymond W. “Rib” Gustafson was born May 1, 1925, to William F. and Alice Klint Gustafson near Rapelje, Montana. He was the seventh of eight children. Rib started school at the Brennan Ranch in the Crazy Mountains. He and his siblings traveled to school on horseback or in their family wagon. On cold days they curled up in a buffalo robe in the back of the wagon.

In 1932 the family moved to the Brown Ranch south of Ryegate, Montana. Rib’s father died of Rocky Mountain spotted fever in March 1933. Shortly after that they lost the ranch and moved into Rapelje, where they boarded teachers. In 1935 the family moved again, this time to Bozeman, Montana. While living in Bozeman, Rib began one of his lifelong passions, skiing. From 1939-1954 Rib was a world-class skier. While attending Colorado A&M School of Veterinary Medicine, Rib won numerous ski titles including 3rd in the giant slalom, 5th in the downhill, and 9th overall at the prestigious National Ski Tournament.

As a young man, Rib helped the family earn extra income by capturing wild horses that had been turned loose by broke homesteaders. He and his brothers broke these horses to ride, kept some for use on the ranch and sold the extras. Rib also worked at several dude ranches where he wrangled horses, played the guitar and sang cowboy songs to entertain the guests.

In 1939 Rib and his brothers traveled to Marfa, Texas, and brought back high-quality horses that became the progenitors of American Quarter Horses in Montana. They returned with three mares and two studs, the most notable being Sunburst, a stud whom they broke and sold in Oregon for $750 (a big price at that time), and Marfa, a mare who became one of Rib’s top rope horses. This preceded any official quarter horse registry and the merger of the American Quarter Horse and National Quarter Horse associations. Rib went on to raise and train American Quarter Horses for the rest of his lifeHis horses were used widely on the ranch and had great success in the rodeo arena, on the race track and on numerous other ranches throughout Montana.

In the early 1940s before enlisting in the Navy, Rib worked near Ennis, Montana. They trailed cattle approximately 100 miles annually from Boulder to Ennis and then on to a shipping point in Idaho.

Rib served as a Naval Pilot from 1943-1947. After World War II he took advantage of the GI Bill and attended Colorado A&M School of Veterinary Medicine. He graduated in 1951 and moved to Shelby, Montana, where he ran the stockyards and began his veterinary practice. In 1952 he moved to Conrad, Montana, and built the Conrad Veterinary Hospital. For many years he was the only veterinarian serving a vast geographic area that included Conrad, Choteau, Browning, Shelby and Big Sandy. Most years he put at least 100,000 miles on his car. In Rib’s early years of practice, cesareans were rare and rancher’s cash was short. Rib was known for making “Chinese Doctor” deals. If the cow died, Rib received nothing. If she lived, he received ½ the cow. At the end of that first calving season he was the owner of 17 ½ cows. He had established his reputation as a veterinarian and had made his entrance into the ranching business. Shortly after, cattle prices went up, and his reputation as a veterinarian dispelled his clients’ disbelief in c-sections, and most began to pay cash.

Rib married Pat Galt in 1953. They had five children; Sid, Kristen, Erik, Barr and Wylie, whose occupations include veterinary medicine, novelist, attorney, law school professor, cattle rancher, math teacher, professional musician, and horse rancher. Like their father, Rib’s children are all hard working Montanans who have embarked on multiple careers and retained close ties to the horse and cattle ranching industries. Despite the demands of his veterinary practice, yearling operation and growing family, Rib found time to enjoy two of his passions: rodeo and skiing. He was well-known for training calf roping and bulldogging horses. He won many rodeos, including bulldogging, calf roping, and all-around titles at Choteau, Conrad, Birch Creek, Shelby, Havre, Canada, and all across the Hi-Line from 1952-1975. Rib was instrumental in establishing the Conrad Whoop-Up Days Rodeo and produced that rodeo for many years.

In addition to owning and operating the Conrad Veterinary Hospital, Rib loved the cattle business. In the early years he ran yearlings on leased property. In 1962 he and Pat bought Aldrich Springs near Conrad. This was the center of their yearling operation. In 1971 Rib and Pat bought a ranch they named Gustafson +3 Ranch, located on the Two Medicine River south of Browning, Montana. They increased their cattle operation to include yearlings and pairs. Rib continued to practice veterinary medicine from both locations. They also ran a herd of registered quarter horses carrying the bloodlines of Zantanon, Buck Hancock, Peppy, Oklahoma Star, Joint Bar, and King.

In 1977 Rib sold the Conrad Veterinary Hospital to devote more time to the ranch. However, he maintained an active practice all through the years and at the age of 87 still practices part time, inspecting cattle and issuing health certificates around north-central Montana.

Rib semi-retired from the ranch in 1998 when he sold it to his son Barr and daughter-in-law Colleen. Rib maintains an active cowboy life and continues to help at the ranch where he enjoys riding, calving, and haying.

Pat passed away in October 2012. Rib continues to live at the family home in Conrad. He rides cutting horses with his son Wylie, runs a small herd of cattle with his son Erik, owns a few quarter horses, and enjoys his view of the Rocky Mountains.