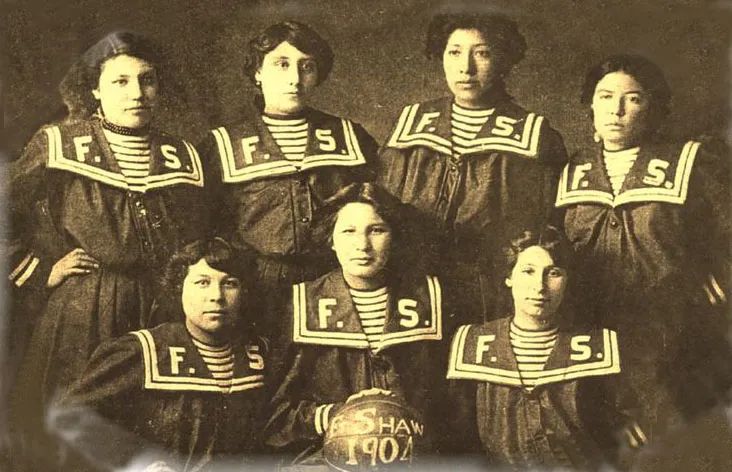 In the early 1900s, the game of basketball was being introduced across the nation. The Indian boys and girls at the government Industrial Indian School in Fort Shaw, Montana, took up the game and defeated many high school and college opponents. Indian basketball was born!

There Was Once This Team of Indian Girls . . .

In 1902, a group of young women from Indian reservations in Montana and Idaho began playing the fledgling sport of basketball while attending school at Fort Shaw Government Boarding School in Montana's Sun River Valley. During 1903, the team, coached by Superintendent Fred Campbell traveled the state, playing before capacity crowds drawn in by reports of their lightning-quick play and superb teamwork. The team routinely defeated college as well as high school teams and became undisputed Montana state champions.

In the summer of 1904, they took their game to the next level by boarding a train bound for the St. Louis World's Fair where they spent five months as students at the Model Indian School, the centerpiece of the government's anthropological exhibit of indigenous people. During their five months in St Louis the mandolin concerts, recitations, and dances performed by the girls drew as much attention and praise as did their exhibition basketball games. Due to their Fort Shaw education they could now do anything and everything that educated non-Indian women could do, which was, of course, exactly the point being made by the living exhibition at the “Model Indian School.” However, interviews with descendants of the team would suggest that this was a point that did not go unnoticed by these bright young women, all of whom were highly motivated participants in the government's game of “Show and Tell.” The government's goal of demonstrating the effectiveness of its programs of acculturation and assimilation and the team's goal of making the most of this unprecedented opportunity to see the country and enjoy the sights and sounds of a World's Fair were not mutually exclusive. This early-day girls’ basketball team from Fort Shaw in Montana provided for their peers and for future generations of Indian youth a vivid example of the ways in which Indian students were able to use boarding school experiences to their own advantage. This is a great part of the legacy of this team.

But it is their athletic legacy that contributed to the 2004 book, Full Court Quest: The Girls from Fort Shaw Indian School Basketball Champions of the World completed by Linda Peavey and Ursula Smith and published in 2008. During that 1904 summer in St. Louis the girls played their twice-weekly intra-squad games on the plaza in front of the Model Indian School. They played before an international audience, offering them their only opportunity to see women's team sports at the Exposition. Clad in wool serge bloomers and middies, the girls played in the sweltering heat of that St. Louis summer, watched by women in long skirts with bustles and little girls in pinafores and button-up shoes. Thus, the games they played that summer not only shattered myths concerning the abilities of Native American women but shattered, as well, frail myths concerning the athletic abilities of women in general. This, too, is a part of their legacy.

The rest of the story is that this seemingly invincible team took on and defeated all challengers and returned to Montana with a trophy declaring them basketball champions of the 1904 St. Louis World's Fair which in effect, made them champions of the world. As their school years ended, these players went their separate ways, though they maintained some contact until the closing of Fort Shaw in 1910 left them with no gathering point for reunion and reverie.

A century later, skeletal bits and pieces of the team's story can be found scattered in archives across the country. These young women were pioneers of both Indian basketball and basketball played by women in Montana. It is only through collaboration with those descendants and tribal kin who have treasured and saved the memories and memorabilia of the individual players that the stories of these 10 young women have survived. Nettie Wirth, Katie Snell, Minnie Burton, Sarah Mitchell, Genie Butch, Belle Johnson, Emma Sansaver, Genevieve Healy, Rose LaRose, and Flora Lucero were Montana Pioneers in education, equality, and sports.