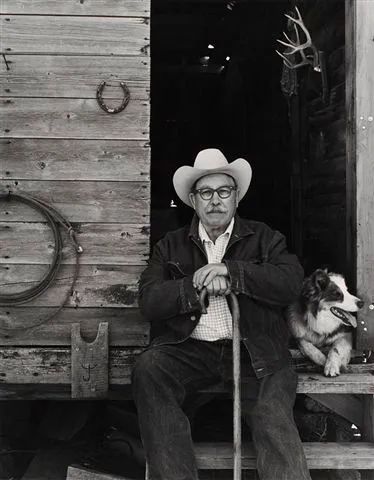 Jack Siebrasse was born in Portland, Oregon, in 1923. Soon after his birth, Jack’s family moved to Big Sandy, Montana, where they ran a small dairy.

Jack was the oldest of five children and the only brother. His sisters claim Jack drove the team of Percherons for his dad before he was old enough to go to school. At age 8 or 9 Jack would ride south of Big Sandy to the Bear's Paw Mountains in search of cowboy work. Jack claimed his childhood ended between his 9th and 13th birthdays riding for McNamara Cattle Co. Days off in the summer and on weekends were spent at his best friend’s ranch at Warrick, Montana, which is in the heart of the Bear's Paws. His friend Ira Henderson would eventually become his brother-in-law. The Henderson ranch was Jack’s home base.

In 1944 with World War II raging, Jack joined the Navy because, in his words, “I didn’t like to walk.” Seeing how people lived in the South Pacific and experiencing torpedo attacks made him more homesick for the Bear's Paws than he had ever been. With the war over Jack headed back to the “Paws” to work on numerous ranches.

In the fall of 1950, Jack and Ira took some steers to Great Falls livestock yards. Jack said he noticed the cattle buyers were driving Cadillac’s and Lincoln Continentals and wearing $100 Stetsons and alligator boots. It got him to thinking maybe he was on the wrong end of the cattle business and should steer toward the marketing end. Jack could see he would have to make some money if he was ever going to be able to own his own place. He sent Ira home and stayed on in Great Falls to begin making his fortune. Jack was going to work at the stockyards even if it was only to be shaking hay in the pens. He walked into the brand office to see if they had any work to be done and later remarked it took him 30 years to get out of the damn place. An old brand inspector by the name of Leo Overfeldt hired Jack on the spot, and after a one-week apprenticeship in Great Falls, Jack was transferred to Butte, Montana. Now Jack was a livestock brand inspector for the state of Montana.

Jack claimed he felt more out of place in Butte than a nun in a poker game, but the worst of his troubles was that he needed a view of the Bear's Paws. Jack spent two falls in Butte before he strayed toward home and took a riding job for Rocky Boy’s Indian Reservation. While packing salt up a steep ridge, Jack noticed a man riding up to him. It was Sid Ramberg, a field man for the Montana Livestock Department. Sid offered Jack more money and a job brand inspecting at the stockyards in Havre, Montana. In a few years, Jack worked himself up to the head market inspector and later in 1974 was promoted to field man livestock detective for a six-county region.

Along the way Jack put together a family and a nice little ranch on Bullhook Creek south of Havre, complete with a few cows, some good horses and a damn good dog. In his many years as brand inspector, Jack met many lifelong friends and threw a few bad characters in jail. Jack might forget your name but would always remember your brand, its location and where your range was. If you owned a cow, he knew you.

After 30 years Jack hung up his red-handled clippers and rope. Jack loved visiting with people about the old cowboy ways and strived to keep them alive. He passed along the art of leather working, rawhide braiding, horsemanship, colt castration and “cowology.” Traits he considered essential to the cowboy way of life. Although rough on the outside, Jack taught his offspring to be good to the less fortunate, women and kids, and the animals you care for. He always said, “good saddles ain’t cheap, cheap saddles ain’t good.”

Jack had a long life of looking down the back of cow. He took great care of his livestock and his grandkids till he passed in November 1996.