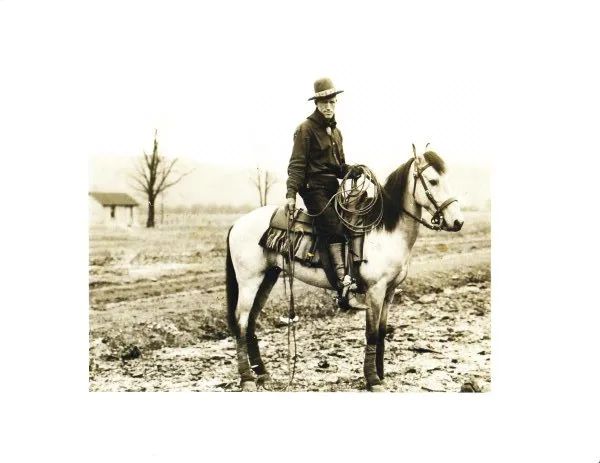 Ed Lane, born in Pennsylvania in 1867, was a cowboy who wrangled wild horses, retired as a volunteer with the Teddy Roosevelt Rough Riders, bred Appaloosas and Palominos, and partnered in the Scott and Lane Wild West Show. After chasing around Cuba with then Secretary of the Navy Theodore Roosevelt as a cowboy rough rider, Ed made Oklahoma his home. He owned a prize six–shooter from the Battle of San Juan and a brand, T Triangle R, from his friend “Teddy.” Roosevelt also gave him an entrepreneurial license from the U.S. government, anything to help a Rough Rider, since he was not on the U.S. Army payroll. While in Oklahoma Ed trapped wild horses and sold them in the East. He met Reuben Schall, also from Pennsylvania, who was doing the same thing. It was the early 1900s and Oklahoma was the edge of the civilized West as well as the door to Texas and places further north along the cattle and trade routes to Montana. Along with Reuben’s brother, William “Ed” Schall, they settled on the Flathead Indian Reservation and traded horses with the Indians. With the establishment of his horse trading business Montana became Ed Lane’s home.

The three men homesteaded and began to buy and trade horses with the Plains Salish people of the Flathead Reservation who were renowned for their horses. It was estimated at the turn of the 20th century that 1,500 Flathead Reservation Indians owned 45,000 horses. The three men sold about 9,000 reservation-bred horses a season to brokers who retailed them to stylish Atlantic seaboard families. “Horse care, horse racing and horse trading brought the white and the red men together,” said Stephen E. Ambrose (Undaunted Courage: Meriwether Lewis, Thomas Jefferson and the Opening of the American West).

Ed Lane and the Schall brothers would load up horses on the new Northern Pacific Railway line that ran from Arlee, Montana, south to Missoula, Montana. From there they rode in the boxcar with the horses to Pennsylvania. Once they arrived in Pittsburgh, they herded the horses into a temporary rope corral on a street downtown. There they used Ed’s entrepreneurial license to set up a temporary horse-selling business. Easterners fancied the prettily spotted horses for show animals and as gifts to their children.

Eventually Ed built his house, which still stands north of Arlee, but he did not settle down. He took on another partner, Gray Scott, and formed The Scott and Lane Wild West Show. Ed began raising exotic horses and using them in shows and parades. He was a good friend of the local Native American Indians and hired them to dress up in their finely beaded outfits and horse trappings. Together they went wherever a show or parade needed them. If there was a rodeo or parade or Wild West show in the 1920s and 1930s, from New York to Hollywood, Scott and Lane were there, showing off the old West the way it used to be: Native American Indians riding and dancing, Scott trick riding, and Ed bustin’ broncs.

It is not difficult to understand how a man such as Ed Lane put together a successful Wild West show. In 1898, the U.S. Army Cavalry was still at its peak: horses and riders perfectly matched. The volunteer conglomerate of the Rough Riders was ranchers, cowboys, adventurers from high society, veterans of the Civil and Indian wars, retired West Point graduates, ne’r-do-wells, miners, sheriffs and just about anyone in-between — over 100,000 in all. There was even a German band. The Rough Riders were tough, enterprising, resourceful survivalists, hardworking and patriotic. These qualities were always the draw to a Wild West show. The last night of the military gathering in Cuba before the men were disbanded, there was a “show” — a fine gathering of all the men. The music played, the Native Americans led with dancing, soldiers demonstrated bronc busting and the laying down of horses. Ed had just witnessed his first Wild West show.

The Nez Perce Indians of Idaho were famous for their spotted Appaloosa horses and were perhaps the source for Salish owned Appies. Ed owned three or four leopard-spotted Appaloosas; however, he mostly bred palominos. Sally Rand, the famous “fan dancer” of burlesque, rode one of Ed’s Appaloosa horses at the state Fair in Pueblo, Colorado, in 1942. His well-trained leopard Appaloosas, Trinidad and Peter Charlie, carried notables when the Scott and Lane Show paraded down city streets. He also owned a little horse of indeterminate breed that he taught to climb stairs inside buildings. Coming down, the horse had to be kept from falling so they put a small horse collar on him and attached ropes to it which two men held from behind to “brake” his descent. He also owned a horse named Hollywood, formerly owned by Hoot Gibson that danced sideways the whole length of the arena.

In 1928 Ed introduced “Push Ball” to the Missoula County Fair. Riding pinto/paints, Ed and three other riders pushed their horses into a giant leather ball used as training balls for football teams and the military. Made of leather the balls were as tall as a horse and scary to the animals. Two teams of two riders were skilled enough on horseback to force the horses to push this huge thing back and forth against a center mark.

Ed Lane lived and shared the cowboy way of life in a time that saw many social and technological changes that were contrary to that way of living. He died November 12, 1946, at the age of 79, and his final wish was that all his horses be set free in the brown foothills behind his house.