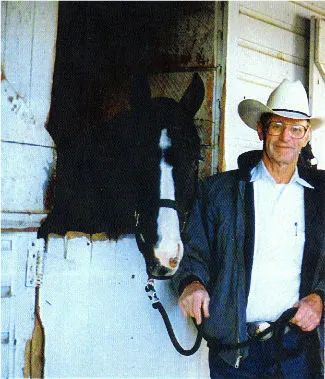 William P. Loney was born May 2, 1932, in Choteau, Montana. He went to elementary school there before migrating to Cascade. There, he came under the watchful and caring eyes of Charlie and Inez Hodson. He was much more interested in horses and working on the Hodson Ranch than going to school. With the prodding of Charlie and Inez, Bill and his friend, Cooper, were the two oldest “kids” to graduate from Cascade High School at 20 and 21.

“Loney,” as he is respectfully referred to by his friends, earned his place as foreman for the Hodson Ranches. While Charlie was busy buying and selling cattle and horses, it was Loney’s job to get them here and there, as well as running the ranch. Oftentimes they trailed cattle miles and days to get them to the Hodson Ranch, Southwest of Cascade. He and his crew would trail 2-year old steers to the Auction Yards in Great Falls, and after the sale, they tightened their cinches and rode 35 miles home. Often on these rides, they would rope anything that moved and some things that didn’t. They would rope thistle and sagebrush and pull it from its root, just for something to do.

During these years, Bill became a master of the cowboy skills. A tough horse was a welcome challenge; getting the last bull home off the mountain in the fall or winter was just something that he did, often by himself. Doctoring calves and lame cows was always a one-man job and every man was expected to perform accordingly. The “day” started at daylight. You had your horse caught, saddled and fed, and your breakfast eaten before daylight. You wanted to be sure to grab something to take along because eating was never a high priority on Bill’s list of things to do for the day. Some have taken hotcakes from breakfast and rolled them up with bacon in the middle. You rode and worked until the end of the day—dark. You put your horse away, fed him, and then went to the cook house. This didn’t just happen on special days of branding or shipping that many can experience. Loney and his men worked like that every day, day in and day out.

Loney attended Montana State College in Bozeman in the late 1950’s, majoring in Agriculture. Bill was on the MSU Rodeo Team his four years in Bozeman. He won a buckle in saddle bronc riding and is remembered by all who knew him for his strong will to win. His teammates could always count on Loney to scratch a point or two in saddle broncs, bull dogging, or bull riding. The 1957, MSU Rodeo Team consisted of Bill Skelton, Bill Brewer, Bill Neuman, Bill Icenoggle and Bill Loney. For each member to practice, it cost him a $10 entry fee. In 1958 he suffered a knee injury which finally prompted a knee replacement in December of 2011. One time while riding a bull at Utah State, he was thrown clear out of the arena and injured his shoulder. The ambulance took him to the hospital, in which he snuck out during the night because he knew he didn’t have enough money to afford the stay.

Loney did a tour in the United States Navy, aboard a carrier and came back with a tattoo of a horse head in a horseshoe on his left shoulder. He was a cowboy, through and through - riding a Miles City Saddlery saddle, which he still has.

Bill brought his family to White Sulphur Springs in 1964; he was starting out on his own. He put some smaller ranches together but needed more to do and to make ends meet. He was hired on to run the Birch Creek and Lingshire units, working for Jack and Louise Galt, who were managing the Rankin Estate. He knew how to run big outfits and trail big bunches of cattle. You got to the lead and would take what you could handle, dropping ones that were unpaired and getting them lined out. At times, they would be strung out for four miles and almost every cow had her calf. Those that worked for him got a lot of saddle time riding alongside Loney. It was 3:00 a.m. breakfast, trail pairs until noon (on a four-day trip) and eat a slice of bologna between two pieces of bread, sometime during the day. The crew would then split up, half fixing fence until dark while the others were throwing another bunch of cows together. Of all the men who worked with Loney and put in the sweat and the time, every one of them, even to this day, will still drop what they are doing to lend him a hand. A testament to a decent man.

To get the cows ready for the 40-mile trek, a portion of the 1200 cows would be gathered, and the riders would hold them in a corner of a field of 30 sections. They were then “paired out”, and the pairs would head to the northwest. Some of those old gals had been through this drill before, and they would grab any calf that would follow to get through the line of riders. Pretty soon some of the calves would come back, so you would have to lope after the cow and try again. Some of us that have made this ride would be so tired that we couldn’t stay on our horses, so we would walk. We would wake to find ourselves in the middle of the cows or somewhere else, just stumbling along. We would get back to where we belonged, only to find Loney smiling and spitting snoose.

Loney always rode the horse with the most go, and, if the horse tried him, that was just part of it. Bill was never seen to grab leather; he would just throw his right arm back, get in rhythm, and let them buck until they were through. One morning while leaving the Lingshire barn, old Raspberry took off bucking. As he went by the rest of the riders, Bill could be heard saying, “You better save it you son-o-bitch; you are going to need it before the end of the day.” Old Dude was a favorite sorrel gelding that Bill brought from Hodsons, and he would buck even when he was nearly 30 years old. One time Bill was riding alone on a snowy winter day with overshoes and a buffalo robe coat. He got bucked off and hung up in the stirrup, and the horse ran off. The snow was deep enough that it cushioned his “fall,” but the further and faster they went, the more snow went up under that heavy coat. Finally, the horse got tired of dragging Loney and the weight of the snow and stopped; Loney got free.

Once Loney was in an alley of wild and mad cows and was mauled by one upset mother. Later in the day, he was sorting horses in the same alley and got run over. He got up with an ear nearly torn off (a mark that he wears to this day), and went on with the job.

Bill took pride and made it a goal to get the job done the best he could and as cheap as possible. Reused nails, staples, and yes, even wire were the norm. He survived the drought years and the bankers. A cow had to pay her way; if there wasn’t money at the end of the year, then money wasn’t spent. The cows survived on what there was. He knows how to get the most stretch from a dollar.

He is as modest as he is tough and has a soft spot for all animals—wild and domestic—including raising two baby porcupines to adulthood. He simply hauled them around like pets.

Bill Loney is a cowboy that is unimaginable to most of today’s cowboys’ standards. His work ethic is unequalled; it is “The impossible takes a little longer” and he expected that from all his help. Several times his friends have hauled him to town for stitches or a cast, just to return him back to what he was doing. THERE IS TOUGH, THERE IS COWBOY TOUGH, AND THEN THERE IS LONEY TOUGH!