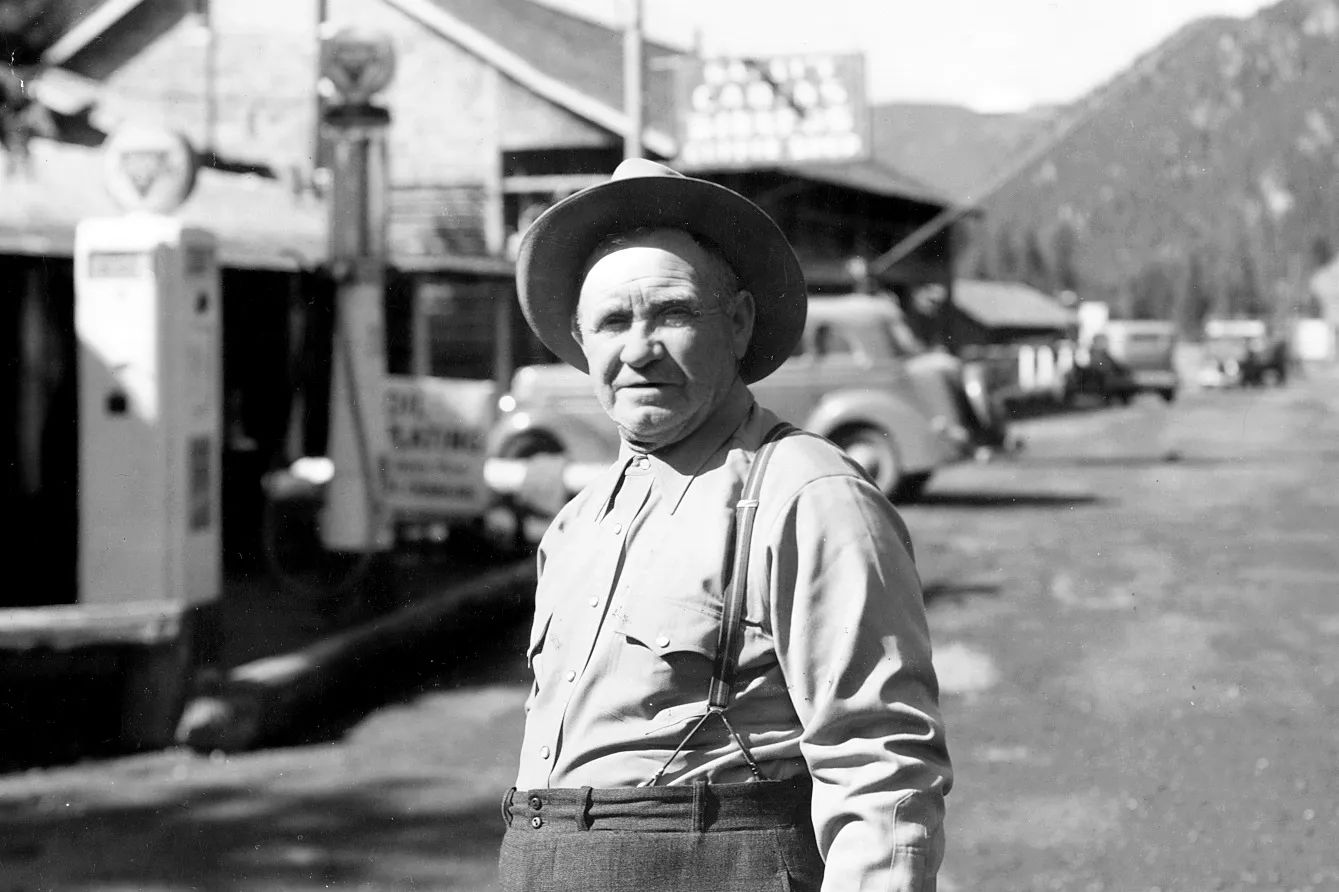 Peter F. Karst was born on August 21, 1875, in Manitowoc, Wisconsin, but by 1898 he arrived in the Gallatin Valley. After a year of carrying mail from Bozeman to Salesville, Montana Pete founded the Karst Stage in 1901. The company carried mail, freight, and passengers through the Gallatin Canyon to The Cooper Tie Camp at Taylor Fork twice a week. He used horse-drawn wagons and bobsleds as well as dogsleds to get the job done.

That same year Pete built a bunkhouse for guests at a halfway point between Bozeman and Taylor Fork near Moose Creek. The canyon had been used for timber, prospecting, and livestock, but Pete had a new idea – selling scenery to tourists who were eager to experience the beauties of this part of Montana. This bunkhouse became the first building of Karst’s Cold Spring Ranch also known as Karst’s Cold Springs Resort. By 1909, the ranch was offering horseback riding, fishing, hiking, collecting wildflowers and rocks, and panning for gold. Guests were offered cookouts at Ousel Falls, fish fries up the Porcupine Drainage, trail rides to Lava Lake and Windy Pass, and day trips to Yellowstone. They were outfitted by the ranch for overnight excursions. Elk hunters were able to take guided trips.

In 1910, the Milwaukee Railroad connected with Salesville, known today as Gallatin Gateway. The ranch had 600 visitors that year. In 1911, the road through the Gallatin Canyon was extended from Taylor Fork to West Yellowstone. Then the following year two Cadillacs and a Model T were added to the Karst Stage fleet to carry passengers.

In 1901, as he was getting into the freight and passenger business, Pete was busy prospecting. He discovered what he called a “queer stuff”, which was a type of asbestos, fibrous like celery, above and about ½ mile north of the ranch. He called his discovery “Karstolite”. Within four years the first asbestos from his mine that was to be used commercially was transported to Bozeman by pack animal. Pete sold his mine claims in the mid-1930’s, and the mine continued to operate. Interstate Products in 1947 constructed a conveyer, dug a pit which eventually was sixty feet deep and ninety feet across, built a mill on the Gallatin River, and opened a road from the mine to the highway.

The 1920’s and 1930’s, were the Golden Age for what was now more consistently called Karst Ranch. A hydroelectric plant was built in 1922, at Moose Creek that provided the first electricity in the canyon. Gradually guest facilities were added so that the ranch had fifty-six guest cabins on the river side of the highway with a larger Karst cabin and also nine or ten cabins across the road at an area that was called Dreamland. The main buildings included a huge dining room famous for great food, a coffee shop, gas pumps, a general store for groceries and gifts, a summer bar, a winter bar, and a big dance hall, built in 1925, with a great view. A still provided the alcoholic beverage during Prohibition. A museum, also called the curio shop, exhibited a stuffed two-headed calf, guns, elk horns, Indian regalia including beautiful rugs, a mineral collection, and rare birds’ nests, among other curiosities. Unique rustic furniture was made at the ranch for the cabins and public areas. The ranch featured an ice skating rink in the winter and a swimming pool, also called an indoor plunge, in the summer with river water heated by an old boiler.

Pete also developed Karst Hill for skiing. The first ski tow was built using 2500 feet of cable from the mine and made life easier for the skiers. Downhill and slalom races were held there. A ninety-foot ski jump plus a practice ski jump were added. In 1938, the Montana Ski Jumping Championships, sponsored by the Bozeman Ski Club, was held at the Karst Ranch, followed by events in 1939 and 1940, when the Northern Rockies Mountain Ski Association Jumping Tournament was held. The Bozeman Chronicle reported that five hundred cars were parked on the highway for the latter event.

During World War II the ranch suffered from a shortage of labor and less travel by the public. However, they kept the ranch open and operating. Pete’s second wife, Nellie (Severance), remarked, “American boys are not closed for the duration – neither is Karst’s Ranch!” Parties for air corps cadets were held every weekend during the winter of 1943, and free chicken dinners were served to all men in uniform.

The 1950’s brought an end of an era to the Gallatin Canyon. Pete sold the West Yellowstone stage line (the mail route) in 1951. He had had the mail contract almost continually since 1901. Karst Stage was sold in 1953, the same year he sold the ranch to two men from Billings, Montana. Pete and “Nell” soon retired to an apartment on Main Street in Bozeman. Karst Ranch operated under new ownership, but the main buildings were destroyed by fired in February 1957. The building which was over the swimming pool area was remodeled to hold the kitchen, dining room, bar with small dance hall, and living quarters for the owners. After Nell’s death in 1960, Pete spent summers with his step-daughter and son-in-law Isabelle and Ed Durnam at their home a short distance south of the ranch.

Pete Karst died at Bozeman Deaconess Hospital at the age of 90 in 1966. The baptismal font at Soldiers Chapel in the Gallatin Canyon was donated by his neighbors in his memory. Little is left today of the original ranch, which continued to operate under the name of Karst Ranch until 1987. Between 1970 and 1987, the ranch was bought and sold several times and twice more destroyed by fire. The final owner chose not to rebuild. Karst Stage continues to operate its transit services in Southwest Montana.

Pete did not live to see the development of Big Sky and the West Fork area. In a 1975 interview Isabelle Durnam guessed that Pete would have been all for the growth of Big Sky. She said, “He admired people with guts to grab hold and build.” Pete Karst – stage owner, dude rancher, prospector, entrepreneur, a lover of Montana – has left a legacy to the Treasure State.