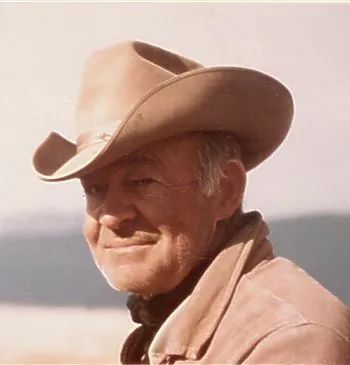 Cap Overstreet built a reputation as about as good a ranch cowboy as you can get. He was known as an outstanding horseman and horse breeder. Born in 1920, James W. “Cap” Overstreet grew up during the dry and economically hard times that came to Montana during the 1920s and ‘30s. He was raised near Salesville, now Gallatin Gateway, where his grandfather had a cattle ranch and his father had a livery stable. Grady Woirhaye, an area cowboy who was a generation older, once said that he never saw a little kid take to horses the way that Cap did. “He was just crazy about them.” Nearly all the photographs of Cap when he was young show him riding his mare.

In the mid-thirties, when he was 14 or 15, Cap worked on the Homer Wilson Ranch near Norris and Harrison, (now part of the Sitz Ranch) where Grady Woirhaye helped him learn a cowboy’s skills. One of Cap’s memories from that period was the time they corralled a bunch of unbroke horses on a ridge several miles from the home place, roped them, each saddled one and rode them home. Cap recalled Grady choosing him a Morgan mare. They apparently made it home OK, but years later Grady told a story about a Morgan mare that was learning to buck faster than Cap was learning to ride bucking horses. Later, Cap worked with other good cowboys including Montana Hall of Fame honoree, Johnny Flowers.

One year in the late 1930’s, he worked for a small rancher near Death, Nevada. As a young man, Cap sometimes ran a trap line or worked in mines between ranch jobs. After he returned from a stint as a tail-gunner in a B-17 flying over Europe during World War II, his work became all ranches and horses. He worked at least one summer as a dude wrangler in Yellowstone Park, where he met a young woman from Massachusetts, Priscilla Smith, who liked horses almost as much as he did. He and Smitty married that fall.

He worked for Homer Wilson again after that, then was the cowboy for the Wall Creek Grazing Association near Cameron for 13 summers. Some winters he worked for the Flying D Ranch near Gallatin Gateway, breaking horses and sometimes feeding and calving cows. The photos from those winters show him dressed warm, riding shaggy haired horses. For at least a couple of those years, Foxly leased both the Flying D and the CA Ranch near Three Forks and ran them as one outfit. During this time Cap became locally famous as a good horseman. Years later, one of the ranch cowboys from the CA said that of the dozens of horse breakers that worked on the CA over the years, only Cap and a cowboy named Ralph Cosgriff actually got any horses broke.

In the fall of 1956, Cap went to work for the Sun Ranch near Cameron where his primary job was to break and train horses. At that time, the Sun Ranch was a large ranch that raised Hereford cows and Thoroughbred horses. The owner also owned a professional polo team and employed Cecil Smith, the only ten-goal rated (the top rating) American player at the time. Smith credited Cap and the horses he trained with helping him keep the top rating for 25 years. Flying Wonder, one of the best and longest lasting polo ponies of that era, was a horse that Cap had used for cattle work on the ranch and that he had also roped and tied calves on in the arena.

Cap had a special way with horses. He had a feel for a horse and sense of timing that is very rare in this world. Although he confesses that he didn’t learn nearly as much from his dad as he should have, Cap’s son Jim said that after he attended a Ray Hunt clinic where he learned the right way to take hold of a horse’s mouth, he rode a colt that Cap was breaking and found that Cap’s horses already had that soft flexibility that the natural horsemen are always talking about.

For many years, Cap owned a stallion named Osage Roan who was by Little Roan Hancock and out of a granddaughter of Question Mark. He ran about ten mares of his own and often bred twenty or more outside mares each year. Cap used ‘Sage for both team roping and cutting. Two of his foals were halter champions in Montana, one was calf roping horse of the year in the Montana Rodeo Association and many were top barrel racing and roping horses.

One of the things that made Cap such an outstanding cowboy was how good he was handling cattle from horseback. Whether it was taking 600 hundred yearlings out to grass for the first time, separating an unruly, and unwilling bull from his cows, or roping a pink-eyed calf on rocky ridge, he knew what to do and when to do it, so that he often made a nearly impossible job look easy. At weaning time in the shipping corrals, he would place his horse near the gate and the rest of the crew would stream the cattle by him. He would cut the calves back and let the cows go out. He could cut the calves back without interrupting the flow of cattle so that the process went quit fast. Typically, only one or two calves out of four or five hundred would get past him. Probably only people who are pretty good at working cattle themselves will recognize what a feat this was.

In the 1950’s Cap had a cow horse called Duggan who was by the Flying D’s thoroughbred stallion Spanish Creek that he raced at the county fair and other local venues, usually in the cowboy race with a stock saddle and bridle, with great success. In the 1960’s he competed successfully in area team roping jackpots and rodeos with considerable success. Roping both for fun and on the ranch was an important part of his life. In his later years when his elbow hurt a lot, he didn’t catch as many but if a cow was about to get into the brush or someplace where getting her back would be difficult, he’d catch every time.

Cap Overstreet passed away in 1988.