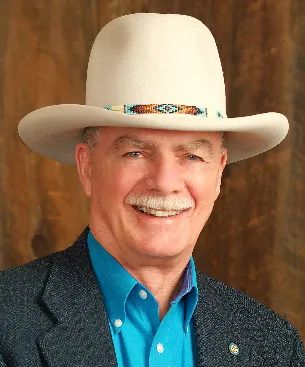 Myron Stanford Lynde was born in Billings, Montana, on September 23, 1931, and was raised on his father's ranch near Lodge Grass, Montana, on the Crow Indian Reservation.

“Stan” attended grade and high school at Lodge Grass, working on the ranch and traveling with the family wherever his father's business—sheep-raising—took them. During his early years, he lived with his parents in "every kind of dwelling you can imagine—sheep wagon, tent, dugout, line shack, cabin, and ranch house." His heroes were cowboys of the old school. “I loved everything about them. As a kid, I followed my bow-legged role models around, got in their way, pestered them with questions, and disobeyed my mother's strict orders not to hang out at the bunkhouse and listened to the stories they told. I learned to sit a horse, work sheep and cattle, but never became a decent roper, I was never what you'd call a top hand. The bunkhouse and bedroll became my homes away from home. I bothered the cowboys and ranch hands less, but I still took in their stories, and I began to make up my own.”

He attended the University of Montana at Missoula, served during the Korean War with the Navy on the island of Guam and on board the submarine tender U.S.S. SPERRY.

“In 1989, I married Lynda Brown and told my stories to her. Lynda must have been impressed. She read one of my stories and instantly brought the same total commitment to my career as she has to our marriage. She encouraged me to write western fiction, we formed our own publishing company, and I tackled my first novel.”

Stan was co-founder and a director of The Great Montana Centennial Cattle Drive which celebrated Montana's centennial with a 60-mile cattle drive from Roundup, Montana to Billings. The six-day drive featured 2,812 cattle, 3,337 horses, 208 wagons, and 105 of the state's top cowboys.

“I was blessed to have a gifted writer as a friend and advocate. Author of the best-sellers Blood Red Wine and The Triton Ultimatum, Larry Delaney became my drill sergeant and mentor. Larry taught me how to give life to my writing and encouraged me to raise my standards. He helped me to become a novelist.”

“I continued to struggle with my coming-of-age story, and finally gave up and put it aside. I took a break. I went back and re-read some of the western authors I most admired-Dorothy M. Johnson, Ernest Haycox, Luke Short, Will Henry--and one day I heard a new voice inside my mind. The voice, it turned out, belonged to a young cowboy with a story to tell. The cowboy was Merlin Fanshaw, and his story became my first novel in 1995, The Bodacious Kid.”

The book proved to be a critical and commercial success and developed quite a following. “The Bodacious Kid that started it all, and for that reason alone it will probably always be my favorite. It's my first-born, after all."

Books in the Merlin Fanshaw series gone on to win recognition and acclaim, including the prestigious Western Writers of America SPUR Award.

Stan calls himself "a westerner by birth and inclination" and his work aptly reflects his life-long interest in the history, lore, and legend of the American West.

He is a member of the Western Writers of America and Authors Guild, and is a recipient of the Inkpot Award for Achievement in the Comic Arts, as well as the Montana Governor's Award for the Arts.

He lives in Helena, Montana with his wife Lynda.