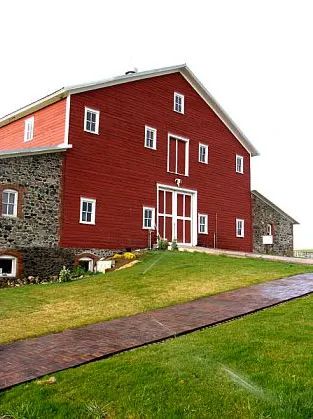 William Comstock Child, the son of a Long Island steamer captain, purchased some 4000 acres of land and set out to develop the White-faced Ranch along the Prickly Pear Creek back in 1889. He spared no expense building this beautiful ranch. After the disastrous winter of 1886-87, when many cattle were lost on the open plains, Childs was determined to construct a barn large enough to house as many as 300 head of cattle, 40 horses, 300 ton of hay and 6,000 bushels of grain in bins. He imported thirty Italian stonemasons from Italy to build the large barn, house and other out buildings with the stone coming from the field and glacial rock on the ranch property. The three-story barn has a total of 27,743 square feet. Envisioned as a country retreat, the ranch was also often used as a meeting place for the highly elite of that era. In fact, Montana’s statehood was negotiated in the octagon mansion.

The ranch was home to many tenets over the years including hosting at least two successful dairy businesses. After the Great Depression the place sat vacant and neglected for many years until 1943, when Paul and Thelma Kleffner made a deal to purchase the ranch from the Federal Land Bank. With a lot of hard work they restored the ranch to its original beauty, raised a family of seven children, and made the place a working cattle and grain producing ranch again. Six of the seven Kleffner children were girls and as a result Paul was heard to explain, "I got into the wedding business in a natural sort-a-way." After many requests from friends and neighbors, Paul constructed the pavilion down by the park and opened the ranch to the community for weddings and special events.

Paul sold the ranch to present owners, Denis and Stacy Young in 2005 and they continue the legacy. The ranch is now used for weddings, company parties, reunions, birthday parties, retreats, tours and other events. The ranch was placed on the National Historic Places registry in 1988.