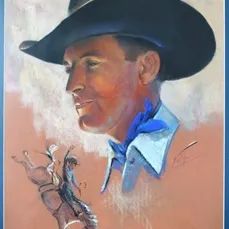 William Linderman was born on April 13, 1920, to parents John and Charlotte E. (Burns) Linderman. He was raised with five brothers and two sisters and half- brother John Jr., George - “Lup”, Elmer - “Bud”, Douglas – “Doug”. Sisters – Margaret and Katherine and later a half-brother, Samuel Dean Spaulding. Bill’s father died in 1926, during the Great Depression. His mother Charlotte “Rusty” raised her family alone, earning a living by hauling milk with horse and wagon. Bill and his brothers worked hard with chores and hunting and fishing to keep the family fed.

Rusty remarried in 1928, to Emery Spaulding, and the family moved south of Belfry on the Clarks Fork of the Yellowstone River. After attending the 4th of July Rodeo at Red Lodge, later to be named “The Home of Champions” for the Linderman’s and the Greenough’s, Bill left home at the age of 16 to start his life as a rodeo cowboy. Rusty hugged him, gave him a kiss and wished him good luck, not knowing when she would see him again. How could she know that this would be the beginning of a lifelong career or that he would become a world champion and one of three brothers often referred to as “The Riding Linderman’s”. Bill hopped a freight train headed for Cheyenne, Wyming which was to be his first “big rodeo” where he won first place in the bronc riding.

Rusty did not have a phone until 1967, so Bill would write his mother a series of some 50 letters from 1941 to 1946, telling her how he was doing; winning or of the dry spells, and that he could use a few bucks to get him by until the next rodeo.

Bill fell in love and married Jean Widden,of Livingston, Montana, in the spring of 1944. They had a daughter, Charlotte “Char”, who was born May 31, 1945, and named for her grandmother Charlotte Spaulding,. Char married Jay Parsons and had two sons, Robert John and John William. Jay’s parents, Jay and Polly were well known in the horse world, as are Jay and Char. Jean passed on when Char was three days old and was raised by her grandmother Marion Widden and her Aunt Suzanne, until Bill remarried in 1948, to Patricia Abor. Pat had a daughter, Michael “Mike.” She and Char were only a few months apart. Bill adopted Mike and raised her as his own. Mike married Dick Galley and, she had one son, William Robert Galley, and two grandsons. Bill and Pat had a son, named Billy. He was a sickly baby, served in Vietnam, married and had two daughters. Billy died at age 33.

Bill took the family to Belgium in 1958, as there was work with a company going to Europe to put on a “Wild West Show and Rodeo” produced by Vern Elliott, from Colorado. Over one hundred bronc riders, ropers, clown acts, stage coaches, Indians, and much more. The show didn’t last as long as planned as there was inclement weather and war broke out in Turkey. Many of the cast had to sell their saddles and other gear to get home, riding in an old army transport plane.

Bill was never drafted into the service, as he was classified a 4F after his physical. He humorously thought possibly because he was too beat up from all his rodeo injuries. Three of his brothers, Lup, Bud and Doug all served.

Bill had a great work ethic, hated lying, and deception. He was always the one to go out of his way to help someone. Bill bought old properties and rebuilt the buildings for resale. He was also an avid golfer, warmheartedly calling it “cow pasture pool”.

Bill was a member of the team that developed professional rodeo. He was considered be as good of a three-event contestant as anyone in his time. His ability to beat the best in the world during his career is truly a small part of his success. Bill was a leader among men and played an important part in the pioneering of the Rodeo Cowboys Association (RCA). He was president at the time when it could have easily succumbed to the International Rodeo Association which was made up of committeemen from Calgary, Pendleton, Ellensburg, Denver and others. Not many will remember the part he played in this period of preservation and growth of the sport as we know it today. Bill had the ability to cowboy at both ends of the arena, riding rough stock as well as competing in the timed events. He was the winner of the all-around championships in 1950 and 1953, also winning world champion bareback riding, steer wrestling (bull dogging) and saddle bronc riding titles. He was the PRCA-predecessor Rodeo Cowboys Association president from 1951-57, and served as secretary/treasurer. While serving in this capacity he gave his life for rodeo, he died a hero just as he lived his whole life. While flying from Denver, Colorado to Spokane, Washington to speak at a rodeo meeting, the airplane he was on caught fire while landing at a Salt Lake airport. It is said, Bill made it out of the plane ‘scott-free’ and then went back in to try to help others escape, and died giving his life for his fellow man. Earlier that day he went into the Pig ’n Whistle restaurant in Denver before getting on the plane and wrote a check for $20. When asked for his address he wrote Heaven, the date was November 11, 1965. He was truly the King of the Rodeo Cowboys. After Bills death, the RCA created the Linderman award in his honor. To qualify, a contestant must earn at least one thousand dollars in prize money in each of three events in one year. The first award went to Montana cowboy Benny Reynolds of Melrose. Twenty years later, it was presented to Bob Schall of Arlee, the only other Montana cowboy to win it to date.

A World’s Championship Rodeo was first produced by Don Wright and Bill Linderman, June 1947, in Billings, Montana and ran for several years. It was well known all over Montana, Wyoming, and the Dakotas.

Montana sculptor Bob Scriver was commissioned in 1966, by the RCA to create a statue of Bill Linderman. It was the first to be placed in the Rodeo Hall of Fame established by the National Cowboy & Western Heritage Museum in Oklahoma City, Oklahoma. It remains there today.