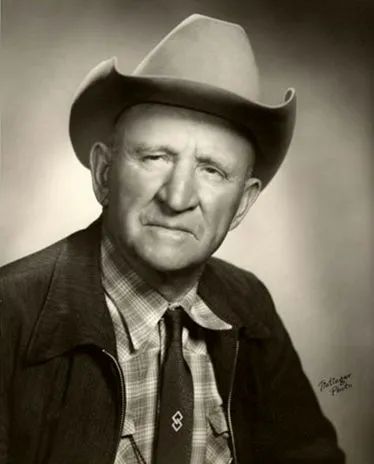 Sam McDowell was born in Anson, Texas, and grew up around Paducah, Texas along with his twin sister Ethel and brothers Mabry, Aubry, Marion and Snyde. Sam was always interested in cattle, therefore quit school at the age of fourteen and went to work for the Matador Land and Cattle Company in Texas.

In 1909, he and his cousin, John McDowell, caught a train for Sheridan, Wyoming. Soon after arriving, Sam found a job breaking horses and punching cows for the Kendrick Cattle Company at the OW Ranch on Hanging Woman Creek. He later worked for the Willis Spear outfit in southern Montana before homesteading on Sarpy Creek, east of Hardin thus acquiring the name of "Sarpy Sam".

Homesteading was not much to Sam's liking: so after a year, he sold out and went back to work for Willis Spear who was running a roundup wagon north of the Wyoming line in Montana. He moved on and landed work with the Antler Cattle Company; a large cow outfit on the Crow Reservation which was owned and operated by Frank M. Heinrich. At that time, Heinrich's holdings extended from the Yellowstone River to the Big Horn River and from the Pryor Mountains nearly to Hardin. Thousands of Antler cattle grazed this vast area from just after the turn of the century until Frank's death in 1928. Sarpy Sam worked for Frank Heinrich as wagon boss for many of those years. Sam was a well-respected cowboy and noted as a good roper at the brandings. He was never seen without wearing his necktie, whatever he was doing.

In 1916, Sam married Carrie Kellison. They had three daughters, Barbara, Ora Jean, and Corinna. They purchased the Kellison ranch on Pryor Creek, but due to hard times had to soon sell out. Moving onto Big Timber, Montana he helped Leo Cramer put on his first rodeo. A couple of years later they returned to Hardin and in 1926 Sam again worked for Frank Heinrich. They moved to the Dryhead Ranch, which had been purchased from Mr. and Mrs. Charlie Phelps. The ranch was located on Dryhead Creek at the foot of the Pryor Mountains about 75 miles west of Hardin. Ever in mind of staying employed to earn a living for his family, they moved once again to Hardin, but returned in 1931, to the Dryhead, which was now leased by E. L. Dana; Harvey Willcutt was the superintendent at the time. Later the McDowell’s were back living in Hardin where Sam worked for the county assessor's office for a time. He also served as deputy sheriff for Big Horn County and to make things interesting the family lived at the jail. He was later appointed Chief of Police. Sam entered politics and ran for Sheriff, but lost out. In 1940, Sam also known as “Sarp” went to work for P.R. Krone, who ranched in the Soap Creek area, out of St. Xavier, Montana. In 1942, he became foreman for the Faddis-Kennedy Cattle Company. He and Carrie moved to the SU Ranch in the Wolf Mountains, southeast of Lodge Grass, Montana.

In 1950, he was appointed Special Investigator and Range Detective for Montana on assignment in Roosevelt County. When this terminated a year later, he returned to Lodge Grass and became a stock inspector for Big Horn County while living at Spear Siding. He belonged to the Montana Farm Bureau and was serving as vice president of the organization at the time of his death in 1959.