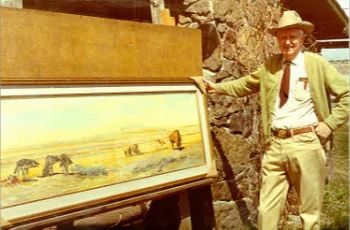 James Kenneth Ralston was an American artist whose primary topics were the old West and images of cowboys and Native American Indians. At times he also did artwork for commercial buildings.

Ralston's family moved to Colorado from Independence, Missouri in 1859, by ox team, then onto Idaho in 1863, and finally Montana in 1864, seeking gold each time. J.K. was born in 1896, in Choteau, Montana. His family moved to Helena, soon thereafter.

In 1906, at the age of ten, they moved to the Capital P Ranch in Dawson County, Montana, just south of the Missouri River located across from the Fort Peck Indian Reservation in northeastern Montana. He spent his early adult years as a cowboy in eastern Montana.

In 1917, he attended the Chicago Art Institute for three months before joining the United States Army in spring of 1918. J.K. served in the 62nd Infantry, Eighth Division in World War I. This unit served overseas but he fortunately was not engaged in combat.

He returned to the Chicago Art Institute in the fall of 1920.

In 1923, J.K. married his wife Willo and they lived on the Pacific coast for seven years. They returned to Montana in 1930, and took over his father's ranch, the Roman E, near Culbertson, Montana. The Great Depression forced them to move to Billings, Montana in 1935 and opened a studio where he began working as a professional full time artist.

The MonDak Arts & Historical Society, which is located in Sidney, Richland County, Montana and was founded in 1967, opened the J. K. Ralston Museum and Art Center in 1972. This operated until 1984, when the contents were moved to the newly completed MonDak Heritage Center in Sidney.

J.K.’s works include a mural at the Richland County Courthouse and General Sully at Yellowstone created in 1942, for the post office in Sidney, Montana. Others are displayed at the Buffalo Bill Historical Center in Cody, Wyoming, the Western Heritage Center in Billings, the Montana Historical Society in Helena, near Crow Agency, Montana at the Little Bighorn Battlefield Museum, and St. Louis, Missouri at the Jefferson National Expansion Memorial.

In 1946, J.K. and his son built a log cabin art studio for him to work in. After his death, the log cabin studio was first moved to Rocky Mountain College and then to the Western Heritage Center in Billings in 2005.

In 1978, he was awarded a Gold Medal by the National Cowboy and Western Heritage Museum which inducted him into the Hall of Great Westerners