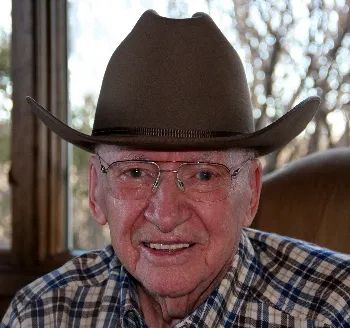 Artist and educator “Ben” Steele fought on the front lines against the Japanese on the Bataan Peninsula, made the Bataan Death March, and survived three and a half years a prisoner of the Japanese during World War II. He credits growing up on a Montana ranch with helping him withstand the horrors of his slavery.

Benjamin Charles Steele was born November 17, 1917, in Roundup, Montana to Benjamin Cardwell and Elizabeth (McCleary) Steele. Ben, Sr., who came to Montana from Westwood, Ontario, Canada at the age of seven, ran cattle on the open range before establishing the Steele Ranch on Hawk Creek in the Bull Mountains south of Musselshell. Elizabeth's father, George McCleary, Sr., a mining engineer with the Milwaukee Railroad, found the coal at Roundup for the railroad.

Ben and his family moved to Billings in 1932, a result of drought and the Great Depression. Ben graduated from Billings Senior High School in 1939, after dropping out several years to help support the family of five children. On the Carroll Clark Ranch at Pompey's Pillar he cowboyed and tended sheep camps that extended south to the Crow Reservation. When he returned to school he worked half days for the Snook Art Company in Billings as a painter and glazer. There he met western artist and author Will James. Ben ran errands for James, helped him clean his house, and watched him draw. The latter left a lasting impression.

Back at the Clark Ranch after graduation, Ben was visited by his parents who advised him to join the military before the impending draft. He joined the Army Air Corps at Fort Missoula, Montana, completed basic training at March Field, California, and was assigned to the 7th Materiel Squadron, 19th Bomb Group as an aircraft dispenser at Kirkland Air Base, Albuquerque, New Mexico. He found military life enjoyable and easy. He was up before the sergeant!

By September 1941, Ben found himself at Clark Field on Luzon Island in the Philippines. The island was attacked the same day as Pearl Harbor. Assigned infantry duty Ben survived 99 days of fighting during which he made excursions in front of the lines at night to rustle carabao. Not enough food was taken into Bataan and the men were on starvation rations.

Camp O'Donnell was the first internment camp for the survivors of the March. While thousands died on the March, many more died at Camp O'Donnell. To escape the deplorable conditions there, Ben volunteered for the Tyabas Road Detail. Of the 325 men who volunteered for the detail, Ben is one of 50 who survived. Taken to Bilibid Prison in Manila he was treated by Navy doctors for dysentery, malaria, pneumonia, beriberi, and septicemia. As he healed he began to draw memories of ranch life - then scenes of prison life. Engineers in the cell block "hospital" helped him with perspective.

When Ben left Bilibid Prison for Cabanatuan farm camp, he left the drawings with Chaplain Father Duffy for safe keeping. Duffy was sent to Manchuria. His "hell ship" was sunk on the way and the drawings were lost. Ben spent the last year of his incarceration mining coal in Japan in the mountains of Honshu Island.

Before returning to Montana to teach at Eastern Montana College (now MSUB), Ben worked for Department of Army as Post Crafts Director, Fort Riley, Kansas and as Staff Crafts Director at the Military District of Washington, DC and at Third Army headquarters, Fort MacPherson, Georgia. He headed the Art Department at Eastern Montana College until his retirement as Professor of Art Emeritus in 1982, after teaching generations of artists.

During his career Ben's work - pen and ink drawing, watercolors, oils, and lithographs - has appeared in one-man and group shows in galleries and museums across the country and graces private and public collections. Throughout his career he has given workshops, demonstrations, lectures, and gallery talks to art associations, schools, and civic groups and has judged numerous art exhibitions. He served as a consultant to the Department of Defense, Marshall Islands for the design of crafts facilities and to the Wyoming Department of Education for a Title III Art Program. He wrote the manual for Department of Army Craft Directors.

Ben was named Outstanding Employee, Department of Army, 1958, and Teacher of the Year, Montana Art Education Association, 1964. He received a Teaching Merit Award from Eastern Montana College in 1977, and the Distinguished Professor Award in 1980. He has been listed in International Biographies, Notable Americans, Outstanding Educators of America, Who's Who in American Art, and Who's Who in the West.

With his wife Shirley he received the Montana Governor's Award for Art in 1992. He was awarded the Humanities Montana Heroes Award in 2012.

A New York Times best seller, Tears in the Darkness by Michael Norman and Elizabeth M. Norman was also illustrated by Ben with pen and ink drawings of prisoner of war life. Published in 2009, it documents the Bataan Death March and the POW experience. As the protagonist, Ben's life in Montana serves as a contrast and relief to the tragic and inspiring account. The Ben Steele World War II POW Collection is now part of the permanent collection of the Montana Museum of Art and Culture at the University of Montana, Missoula, Montana. The Collection consists of 11 oils and 82 drawings which tell the story of the Bataan Death March and prisoner of war life.

Ben Steele continues to draw and paint contemporary Montana landscapes. He lives in Billings with his wife Shirley.