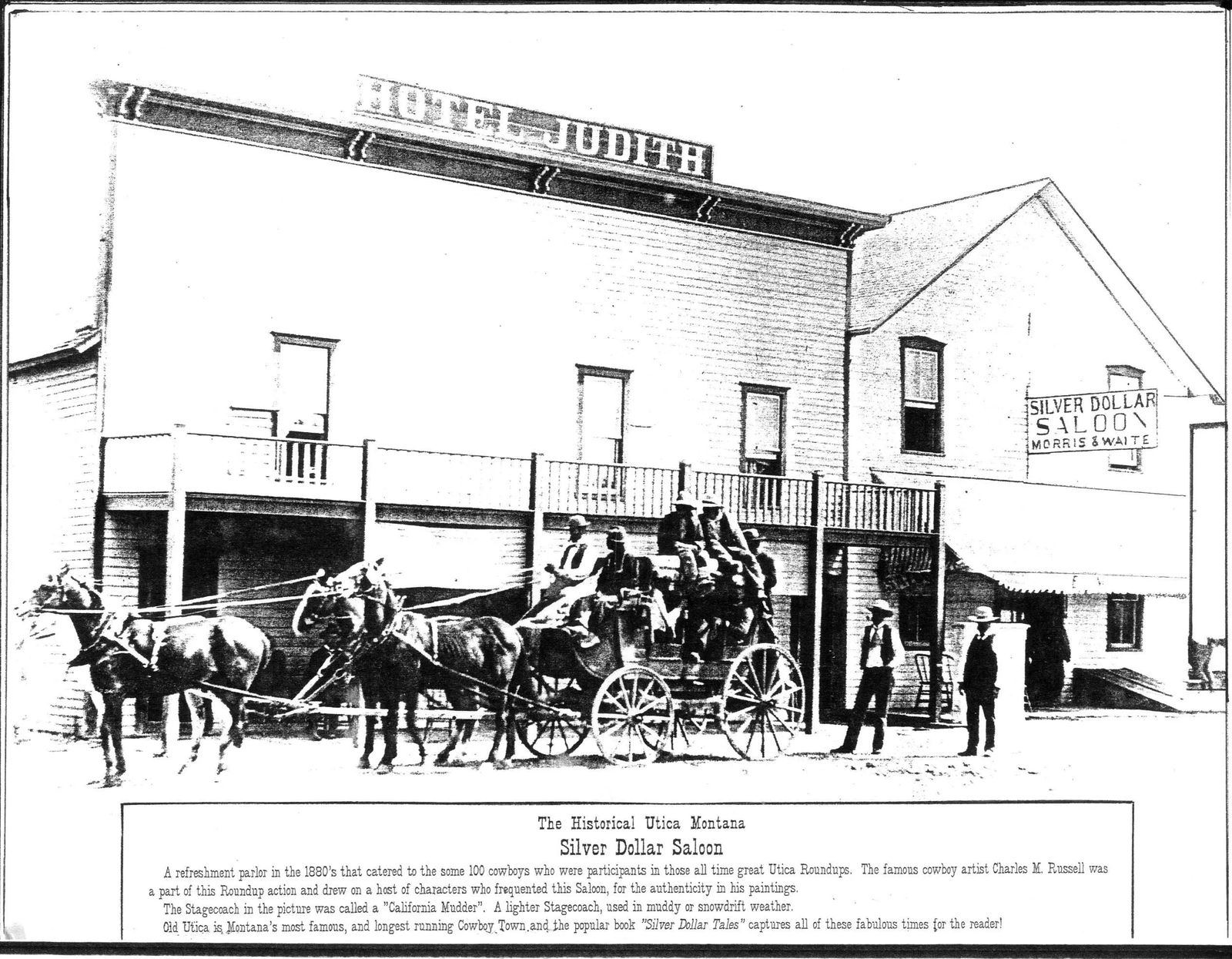 Walter D. Waite and Ed Morris built the Silver Dollar Saloon in Old Utica, Montana in 1888. The saloon building was a "large for the day" two story building with the bar downstairs and the dancehall upstairs. This early day saloon and hotel was timely with the illustrious days of the Utica Cowboys from 1879 to 1895, and the epic journey of the 1879, rich gold strike on the Yogo River a few miles above Old Utica's location. The ambitious Old Utica lit up the whole area with its prosperity between 1896 and 1910. From there it coasted through the serene years of 1911 through 1928. The fourth and last era was the sobering and challenging years of the great depression from 1929 to 1939. Years later when the Saloon was vacant Waite's grandson Walter F. Waite reported that he and the boys in the community would take their knives and dig out the innumerable pistol slugs back of the bar and in the ceiling. There were all sizes of lead bullets. Some slugs barely penetrated the wood which leads one to wonder whether those bullets would have even caused bleeding. The boys wondered too what people in the dancehall thought when bullets came through the floor from the bar.

The "Hotel Judith" was attached on one side to the Silver Dollar Saloon and was an impressive two story structure built in the shape of an "L" with fifteen rooms and a dining room. Louise Holland, the future wife of Walter D. Waite, came to Utica when she was sixteen. After working a couple of years for other people, she went to work waiting tables at the Judith Hotel Café. When she started working at the café Jane Burke, "Calamity Jane" was doing the cooking. Louise recalled that Jane was kind and patient with her but if a drunk came in making a nuisance of himself, she was strong and able enough remove almost any drunk man though she was aged and going blind.

Right back of the saloon was a big, tall square ice house built for the saloon's ice which later supplied the town with ice. Waite also built the Utica Livery Stable about 500 feet from the hotel and saloon, an elaborate structure for the day with 14 double horse stalls and a lean-to with a long, continuous manager for saddle horses. The Livery Stable contained an office and oat bin on the first floor and the entire second floor was hay mow. This stable filled a vital need for the Silver Dollar, the Judith Hotel, other businesses and the town of Utica. Before the turn of the century Utica was the largest and busiest town in the area. In 1879, a rather inconsistent mail route which started in Idaho passed through Utica. The mail and sometimes a daring passenger came through with the mail in a buckboard (a poor man's stagecoach). The success of Utica continued until the Great Northern Railroad built through in 1906, and missed the town by a few miles.

Montana’s famous artist Charles M. Russell worked as a “nighthawk” for the Utica roundup when he was a teenager. “Charlie” herded between 400 and 500 saddle horses on a high country Mesa just back of the West Utica hill. One of Russell's more famous paintings "A Quiet Day in Utica" is of a cowboy riding a bucking bronc down the mainstreet of Utica. Within the picture is Mountain Man Jake Hoover who discovered the Yogo Sapphires and "Teddy Blue" Abbott whose book We Pointed them North is a western classic. The original of this painting is appraised in the hundreds of thousands of dollars and hangs in the Sid Richardson Museum at Fort Worth, Texas.

The partnership of Waite and Morris amused the residents of Utica. Morris had a gentlemanly, reserved air about him, a throwback to his southern aristocratic ancestors. Waite was fun-loving, a menace to seriousness, and a prankster. On a cold snowy winter day a peevish eastern woman stepped off the Utica stagecoach and asked Waite, "What do you raise in this God forsaken place?" He replied, "Mostly hell ma'am, pure hell!" Another time he hung a sign in the saloon that said, "absolutely no joi de vivre fellows allowed in this saloon ". When questioned about the French in the sign he gravely informed people that it said "a horse's ass " when it actually said "joy of living. " It was frontier times and this kind of entertainment seemed to be what was selling. Another form of entertainment Waite pushed was a testing of athletic agility and strength through the friendly sport of seeing who could eject who out of the Silver Dollars swinging doors. Walter Waite's low center of gravity from that stocky 220 pound frame, combined with an inherited understanding of physical leverage made him a hard fellow to remove from his feet. An adversary whose feet were not touching the floor could only wave good-bye to the crowd. Waite took on all comers and rarely found him being put out on the historical old boulevard. Many substantial monetary bets rode on the outcome of these struggles.

Walter D. Waite and Louise Holland were married in 1900, and Louise ran the hotel for 18 years while raising three boys and a girl. The Waite's children consisted of Charles b/d 1901, Kenneth b/d 1903, Gladys b/d 1905 and Dave b/d 1907. By 1915 time was running out for the old patriarch, Walter D. Waite as his untimely death occurred in 1915. He left Louise a widow with four young children.

Prior to 1930, there were four saloons in Utica. The Cottage Saloon wasn’t long in operation. The Red Onion and Grays both burned to the ground. Finch David converted the Silver Dollar into a Pool Hall and operated it until 1935 when he closed the business. Sadly, both the Silver Dollar Saloon and Judith Hotel were torn down in 1941, destroying still another landmark of early Montana history. Since the lumber was still good much of it was used by farmers and ranchers for barns and sheds. In 1994, Walter F. Waite, the grandson of Walter D. and Louise Waite wrote the book "Silver Dollar Tales-Old Utica." The book was published by Walter F. and his wife Marilyn. It furnishes an outstanding account of the many reasons that Utica, the Silver Dollar Saloon, the Judith Hotel and the memorable residents of the community were important to the Western heritage of Montana. As noted in the Billings Gazette and Great Falls Tribune Utica lives on as an icon of the Old Cowboy West and Walter Waite with his book "Silver Dollar Tales" assures its colorful past will not be lost to posterity.