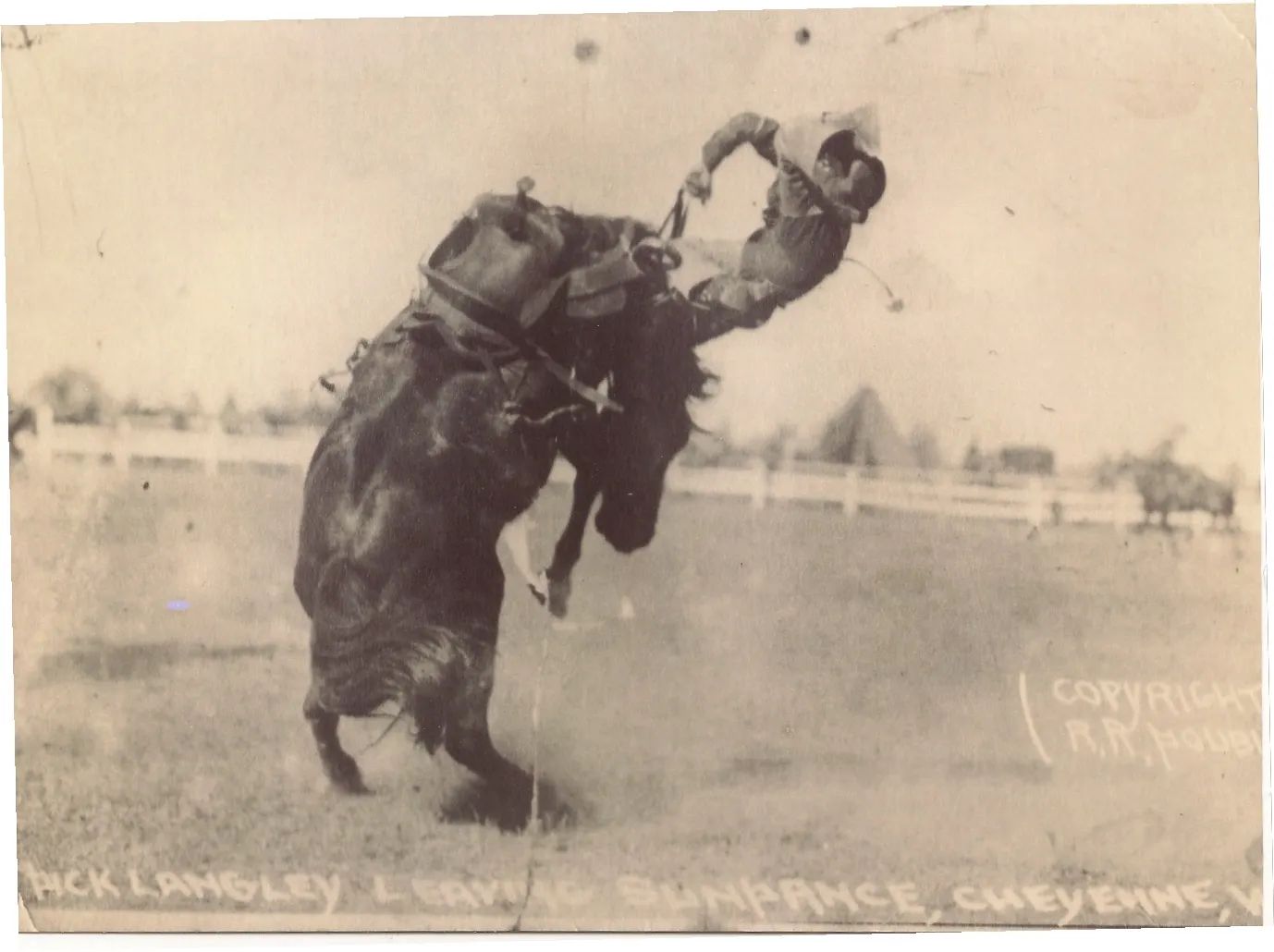 Richard Carlisle “Dick” Langley was born May 10, 1898, in Durango Colorado, to William and Catherine (Carlisle) Langley. He moved with his family to Montana in 1899 where they settled on Hound Creek. He attended school there until he was 13. At that time, he went to work breaking horses for his uncle Jimmy Carlisle, who managed one of the largest horse operations in Central Montana near Benton Lake during the early 1900’s.

From 1921 through 1929, Dick placed in bronc riding at most of the major rodeos in Montana, including Great Falls, Wolf Point Wild Horse Stampede, and the Bozeman Round-up.

Although he rodeoed mostly in Montana, he did travel to California and entered a number of rodeo’s there, along with two trips to the Cheyenne Frontier Days, where R.R. Doubleday took a picture of Dick leaving Sundance. The horse had the reputation for flipping over backwards. Dick was told if the horse felt like he was coming over the top of him he better bail off. At this moment Double Day got two subsequent pictures.

After winning the bronc riding at Wolf Point, the stock contractor offered to stake Dick to go to Cheyenne. A life size reproduction of this picture of Langley and Sundance hung in the old Cheyenne Train Station for many years before it was tore down.

In the late 1920’s upon the death of Jimmy Carlisle, Dick and his brother Lew bought out the horse operation of the Carlisle estate. They then furnished bucking horses for numerous rodeos in Central Montana. These horses were trailed to the rodeos, some as far as 150 miles away. Dick usually tried out most of his horses before taking them to a rodeo. He also broke and sold horses to various ranches, throughout Montana during the 1930’s and 1940’s. His family went on to raise descendents of these horses.

In his later years, Dick ranched on the Muddy Creek, north of the Sun River, where he pastured cattle for the livestock auction yard at Great Falls. He also order-bought cattle for a number of livestock operations and meat packers.

Dick was a member of the Montana Cowboys Association in the 1930’s and early 1940’s and judged many local rodeos.