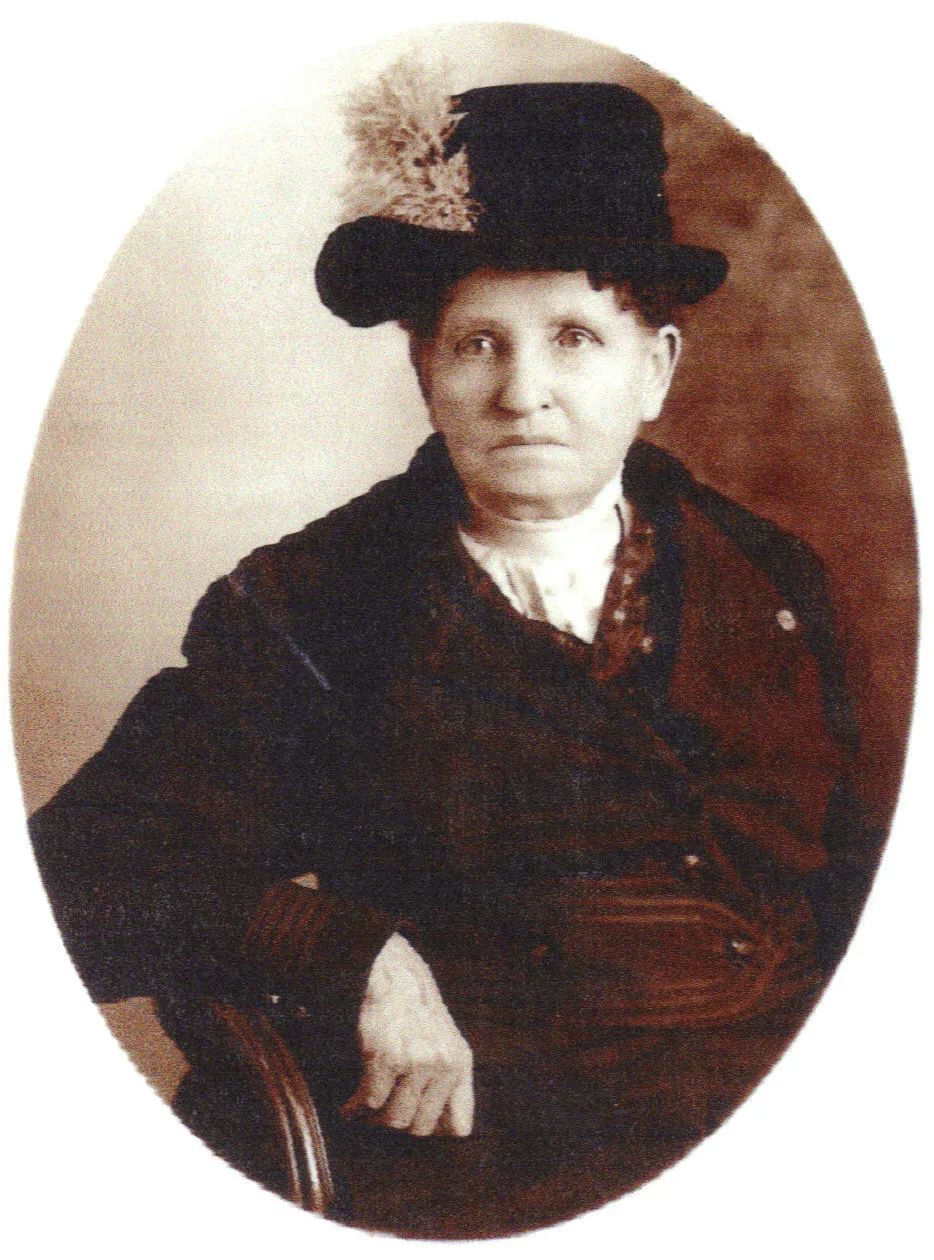 Elizabeth Smith was born in 1844, in Rockford, Illinois, the ninth of ten children of Solomon and Elizabeth (Davis) Smith. At an early age Libby learned to chop wood, haul water and help her mother with the never-ending task of keeping clothes clean. As a child of the frontier, she also learned the chores and tasks undertaken by men such as horsemanship and handling stock.

From her autobiography: “My life from infancy has at all times been an active one, both from choice and necessity … it would have been impossible for me to be other than a ‘little busy body’ for God in His goodness endowed me with a nature abounding with activity, energy and ambition, and had I been compelled to lead an indolent, hum-drum life I should have been the most unhappy person on earth.”

The family later settled in Iowa, and then, when Libby was 10 years old, some of the family, lured by the quest for gold, headed west for the young town of Denver, Colorado. At that time, the city consisted of perhaps four or five cabins built at the confluence of the Platte River and Cherry Creek. The search for gold led to other expeditions to other areas of the West, such as New Mexico, and in the process young Libby was confronted with attacks from wild animals, Indians, flood and fire, while scratching out a meager existence in a frontier world.

After the family home at Denver was washed away by an enormous flood, Libby, at age 17, and her brother, Chan were offered employment by the wagon-master of a 100-wagon train which traveled from that area to and from the Missouri River. She served as the cook and he as a freighter. She made 12 trips across the plains, all the time heeding her mother’s words to maintain her femininity. All kinds of adventures imaginable on wagon trips across the plains occurred, including skirmishes with Indians, captured by a tribe, bad weather, and rugged country. Her last trip across the plains marked the date of her settlement in Montana.

She and her brother arrived in Virginia City, Montana via the Bozeman Trail in 1863, with a freighting wagon. Virginia City was filled with folks filled with dreams of gold and getting rich quick. Lawlessness was rampant. The famous Vigilantes took over the enforcement at that time and little did Libby know that one day she would marry a member of the Vigilantes.

Bannock, another hotbed of gold mining, was the next stop in her journey. It was there that she trained in nursing, gaining the name of “Aunty.” She moved to Helena where she worked for a prominent physician and in the home of a family caring for them. Fate again turned against her when the home burned to the ground and she lost all her money and possessions. Miners in Canyon Creek, near Silver City, who knew of Libby, offered her a position as camp cook. It was while she was there that she met and fell in love with the owner of a silver mine and former Vigilante, Nathanial Collins. They were married in 1874. He bought a cow for his new bride - the beginning of their stock-raising venture.

The Collins later sold their silver mine and rented a ranch in the Prickly Pear Valley. They suffered through bad winters and hot summers loosing numerous cattle. Collins decided to check out the Teton River Valley. He had heard about the valley and its abundant grass, water and natural shelter for stock.

They arrived in the Teton River Valley, northwest of present day Great Falls, Montana in 1877, and situated themselves in a small log cabin located on the banks of the Teton River. The two then purchased 600 hundred acres in the area near Old Agency. Mrs. Collins was the first white woman to settle in the Teton Valley. She suffered from many bouts of loneliness since they were the only white settlers in the valley. The Blackfeet Indians were to become her friends.

In November of 1881 Libby gave birth to her daughter, Carrie, who was the first white child born in Choteau. At that time Choteau consisted of a single store and two houses. The Collins family later adopted two orphaned Blackfoot girls to raise as their own.

During the next few years the couple’s herd continued to grow, with Libby working hard alongside her husband. Since there wasn’t a doctor in the community, “Aunty Collins” also looked after the sick and injured as she set a broken bone or helped to bring a child into the world.

In 1886, the couple moved their ranch to the South Fork of Willow Creek west of Choteau in the Bellview area, and also purchased ground where they could raise enough hay to keep the cattle through the winter. Instead of selling their calves to cattle buyers who came to the ranch, as had been the tradition, Nat and Libby decided to ship cattle directly to the Chicago, Illinois market. The first year return turned out exceedingly well, so they decided to follow suit the next fall. However, when Mr. Collins fell ill and could not accompany the cattle, Libby decided to represent the livestock. For a woman to undertake such a task was unheard of in the cattle trade and it was against the rules of the railroad to allow a lady to accompany stock on a cattle train. After a delay of ten days or so, she approached the representative of the Chicago commission firm with headquarters in Great Falls and petitioned for permission to accompany her stock to Chicago. They consented to do this, and soon the railway company telegraphed back a notice ordering all the employees of the railway to provide for the comfort of Mrs. Nat Collins.

As the train prepared to depart from Great Falls to Chicago, stockmen and cowboys who were in the city shipping their cattle gathered on the platform and cheered, “Success to Aunty Collins - The Cattle Queen of Montana.”

From a newspaper quote at the time: “Mrs. Nat Collins has earned for herself the distinction of being the first and only lady in Montana to raise, ship and accompany the train bearing her stock to the Chicago market and personally superintend the unloading of the animals and their sale, and throughout the length and breadth of the land she is known as ‘The Cattle Queen of Montana.’ She is well informed on every subject pertaining to stock raising and her judgment is often asked by others regarding purchases and other matters pertaining to the industry.”

On September 11, 1904, Nat and Libby’s daughter, Carrie, now 23, married Frank Salmond, a prominent rancher in the Bellview district. A few years later Mr. and Mrs. Collins retired from their livestock business, selling out to the Salmond’s, and moved to Choteau, where they were active in civic affairs. Nat Collins died in December of 1911 at the age of 77. Mrs. Collins died in June 1921, also at age 77, but not until she went on another gold quest, this time to Alaska.

The Salmond Ranch under the direction of Frank and Carrie, and then their son, John (better known as “J.C.”), expanded and developed into a spread of over 40,000 acres, and has been the Salmond family’s home for five generations. The great-great-grandchildren of Frank & Carrie now operate the ranch.

From the obituary of Elizabeth Smith Collins: “The death of Mrs. Collins removes from the community a leading representative of the class of men and women who have helped to make the West what it is. Her life is the record of great energy and great ambition, a record of the indomitable will of the true pioneer. She knew the (Indian) people by living among them. …. Elizabeth Collins lived the life of the pioneer with all its struggles and hardship, and helped make possible the easier condition which we enjoy today. The people of Choteau and particularly of the Bellview country where she lived so long have seen in the death of Mrs. Collins the passing of a true representative of that honored class, the Montana Pioneer.”