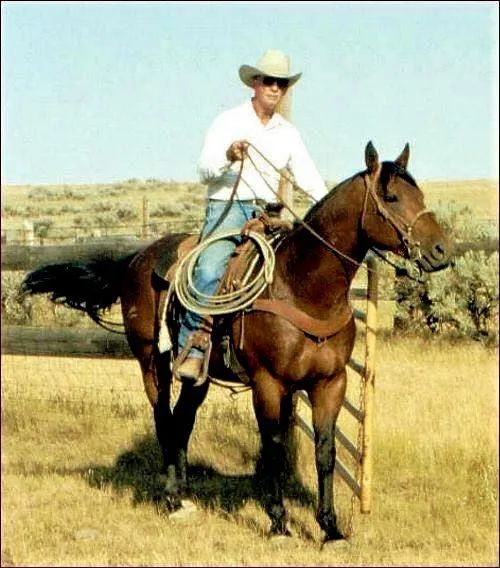 Lynne Taylor was born in 1935, in the Hole in the Wall Country near Kaycee, Wyoming. His first years were spent in the "Red Cabin" on the east slope of the Mountain. There wasn't a neighbor within 40 miles. He learned to live as the early pioneers lived with horses as the main transportation.

His father took him on the roundups on the mountain which was done the real cowboy way with a rep from the ranches to cut out their cattle and he learned to rope and handle cattle at a very young age. He knew from an early age that the only thing he wanted to do was work with horses and his first and best memories were of horses.

He broke to ride his first horse at age ten. His mother moved into Casper to enroll the boys in school because there was no school to attend in the Hole in the Wall Country. To pass the time in town, his dad brought him a little filly to break. After it was broke, he rode it through Casper to the sales yard to sell.

After the war, his dad moved the family from Wyoming to Montana with the idea that he would buy a ranch in better grass country. He didn't buy a ranch but settled in Miles City, Montana. There Lynne went to school, was a good student, played sports, and continued honing his horseman skills. Was privileged to have worked with Bud Kramer and Bob Pauley, the best horsemen he ever knew.

After high school and junior college, Lynne joined the Army. After the Army, he attended CSU and Dickinson College to be on the Rodeo Team. Lynne made his living rodeoing for a number of years. He competed on bareback horses, broncs, and bulls. Not many people knew he rode bulls. He said that frankly he didn't like riding bulls. He eventually settled on saddle broncs and could tell you everyone he was ever on. He said he rodeo'd because he could make more money that way than working on ranches. He made many great friends and they kept in contact always. Lynne rodeo’d in many parts of the country, even Chicago and the Gardens. He didn't like rodeoing in the south. Said you had to be "one of their boys" to be judged fairly. He rodeo'd for a number of years but an injury in Idaho convinced him it was time to quit.

He then went to work for the Bureau of Land Management (BLM) and managed the Pryor Mountain Horse Range for 20 years. When he took the job he had no idea what his work would be-he just needed a job.) His early years on the east slope of the Mountain in Wyoming provided him with the expertise of handling wild horses. When the Pryor Mountain Horse Range was established (the first federally funded horse range in the nation), he wanted to manage the Range and his background was perfect for the job. The first years on the Range were good years. Eventually the politics involved hurt the range and the horses and he was happy to leave the BLM.

While Lynne managed the Pryor Mountain horses, no helicopters were used. The horses were gathered the old way-cowboys on horses. Not very many people had the skill to work in this way. But because he endlessly rode the mountain and knew their trails and every horse on the Range, the gathering was accomplished without motor vehicles. He could throw a horse loop a mighty long way and always rode good big horses that could stand the jerk of catching a running wild horse. Lynne greatly improved the Pryor Mountain horses by carefully culling them from the herd as to conformation and color. He followed the guidelines that governed the Pryor Mountain Horse Range at that time and the horses thrived.

While he was employed by the BLM, he was a pickup man for several good rodeo companies. He was good at it and rode his own horses.

After retiring from the Horse Range, he was able to accomplish his dream of raising big strong athletic horses that could be ridden all day in rough country. He had worked on big ranches and knew that a good horse is invaluable to a cowboy. He purchased two great studs that met his specifications--Roanys Tomcat from Bub Nunn's great stud, High Rolling Roany, and Awesome Pete from Bob Shelhamer's great stud, Mr. Pete Oswald. He put the two studs with mare bands carefully chosen that would mix with the bloodlines of his studs.

He had three bands of mares, run on rancher friends' property in exchange for their use of the studs. Lynne raised many fine horses and continued to train and ride them. He became interested in their talent as rope horses. His horses had the size to be used as pickup horses at rodeos. They could work all day in the country and still have gas to get the job done. They were smart and most of them gentle enough to be used for most any endeavor.

Lynne did day work for ranchers as a way of exposing the horses to livestock and readying them for sale. The last full day of his life was spent riding one of his young horses day-working for a rancher.

Lynne very unexpectedly left us at the age of 73 years and two months. He will be forever missed by his family and friends. His knowledge and understanding of horses was unique. He never bragged about anything. It was all just natural for him.

If Lynne were here, he would confirm that he his life ended doing what he loved working with horses.