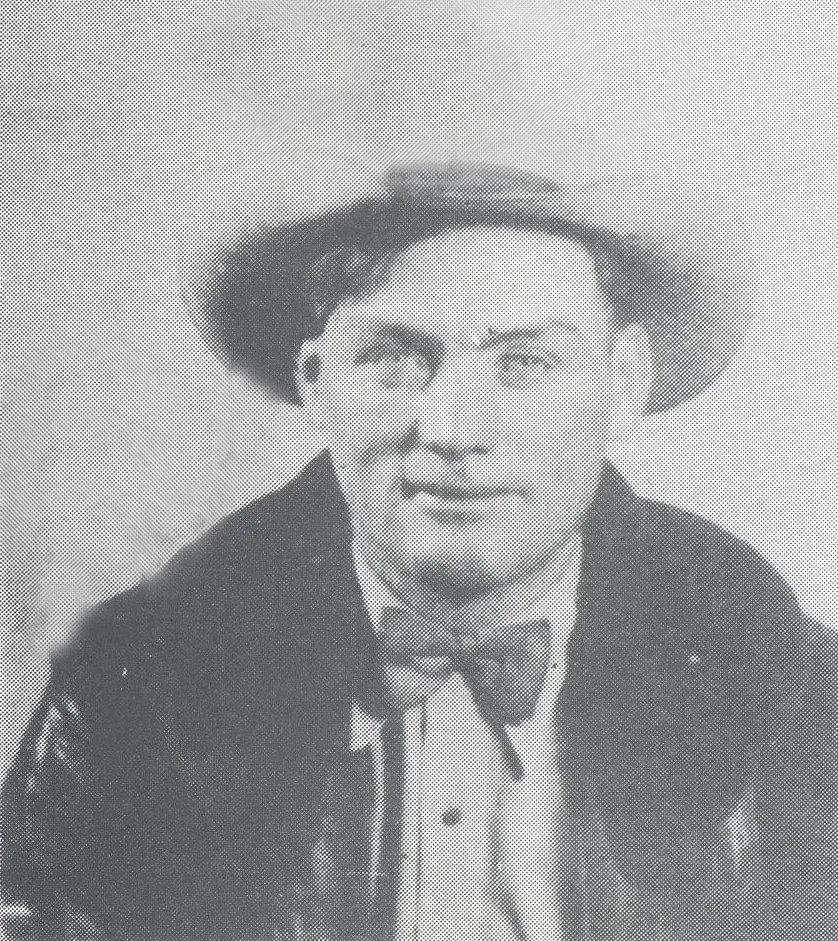 Daniel Vincent Haughian was born in 1908, to Irish immigrants Daniel and Susan (Quinn) Haughian. He was the second oldest of ten children. Their ranch was located at Little Sheep Mountain at the head of Custer Creek. Educating the Haughian children was a challenge. School was held in dugouts, shacks, and even at the Ursuline Convent in Miles City for a time. The school year was also shortened for the boys as they were always needed to help with fall and spring work. When he was quite young, Dan was already riding at roundups and driving teams of horses to Miles City. He rode with cowboys like Bill Haley, Bill Johnson, E.W.Thomas, Charley Clement, Ed Thompson, Bill Woodcock, Mick Devlin, and Jim Eastwood. One time he helped gather 1000 head of horses into large corrals near Kinsey; he helped cut out and trail his father’s horses home to Little Sheep Mountain.

He saw the range when it was all open and trailed horses all over the eastern part of Montana. While their dad was alive, each Haughian boy, when he reached a certain age, would be given a few head of sheep. Dan learned the livestock business by starting young. He herded sheep for many years during all kinds of weather and slept out many nights on the range, even as a child.

He loved to take time out to attend local rodeos. He liked to try out any and all bucking horses and wasn’t afraid of any horse. When he was 17, he won second in the saddle pitching at Olanda; the prize was a case of peaches that he enjoyed eating at the wagon where he was herding—canned peaches were a special treat and he didn’t have to share them there! He loved to attend rodeos even after he quit participating; he supported Miles City’s youth rodeos and Terry’s 4th of July and Kids’ Appreciation Day rodeos.

In 1905, Dan’s parents had a 40-acre homestead, a two-room log cabin and not much else. Free range was still available and by 1931, they had a decent little ranch of a few sections and a band of sheep. And then Daniel, Sr., died of cancer. The oldest of the ten was 23 and the youngest was 10. Dan was the oldest son and, therefore, felt responsible to help their mother raise the family. His brothers and he pooled what livestock they had and, together with their mother, formed Susan Haughian and Sons, which was later changed to Haughian Livestock Company.

They got by for a time until 1934, when the drought and grasshoppers hit. Daniel knew he had to start looking for grass, so they moved their ragtag herd of cattle up north past Jordan near the Missouri Breaks. Susan was ahead of them trying to find leases. Susan would send a check with the inquiry; postal replies were slow then, so they never knew if they got the lease or not. Dan and his brothers couldn’t worry about whether they yet had the lease. Once when they reached a spring, they saw other cowboys digging out the spring. Quick-thinking Daniel asked if they were digging the spring out for the Haughian cattle since they had it leased. The strangers demanded to see proof; without hesitation, Daniel turned to a younger brother and bawled him out for leaving the lease paper in the sheep wagon—the bluff worked. Over the years, Dan leased summer pasture when the weather turned dry. Even though it was hard work to relocate for the summer, Dan’s and his brothers’ families spoke of those summer camps as some of the best times.

Dan and his family survived the drought and the depression; the next battle was with the government. Dan and his mother Susan worked together buying up dried-up, half-section homesteads around the home place. Under the Bankhead-Jones Act, the government was also buying up sub-marginal homesteads. Part of that act was resettling some of the dry farmers who were displaced from the unproductive holdings in the southeastern part of the state. Under the plan, the government would set up the farmers to get irrigated acreage and grazing rights to a huge community pasture. The catch was that grazing land would be taken from ranchers who had been leasing it and making a living on it for many years. Ranchers spoke at the state Grass Conservation Authority hearings, fighting tooth and nail to keep their much-needed grazing lands; however, the Haughians, along with other families, found their leases jerked from them.

Dan and his brothers continued to utilize the leased land. One May morning after the lambing season was coming to a close and Dan hadn’t shaved for weeks, they were met by a carload of men from the government, including the super planner for the resettlement plan. Dan, with his fiery red beard, spurred his horse and rode to meet them; he jerked one guy out of the car and told him what he’d do if they tried to run them off. When they reacted by saying they would return, Dan replied, “By golly, I'll be here if you send a car every day for a year.” The super planner told him they were going to be bringing in a band of sheep. Dan told them he would buy a thousand head of steers and turn them loose and let eat them off every blade of grass ahead of the sheep. The government men left and never returned. Haughian Livestock raised enough money to buy the lease land from the Northern Pacific; other area ranchers did the same and the pasture project was killed forever. The Kinsey farmers and the area ranchers remained good neighbors.

By the middle thirties, Dan had expanded the ranch from Little Sheep Mountain to the Yellowstone River. He was a natural born planner and wasn’t afraid to take major steps; he knew it was a good idea to improve the land along the river so they could raise irrigated crops for winter feed. Even though his education had been cut short, he had an uncanny knack for figuring in his head. The bottom land was soon producing winter feed, an old section house was moved in, and Dan and some of his family were living there. It worked out well to have part of the family at the river end of the ranch, which they called Saugus as that was the name of the railroad station nearby. Eventually Dan purchased more parcels of land, and in 1967, the brothers divided it into 4 separate ranches. Daniel kept the river property and the home site that he had developed along the Yellowstone. He remained there until his death in 1993, at the age of 85.

He and Mary Kasten were married in 1945; they raised nine children: Cecelia, Susan, Theresa, Donna, Quinn, Nora, Jodette, Terry, and Patrick. Dan was again faced with education challenges. The older children went through similar moves that Dan endured with his education: they were homeschooled, stayed at a grandparent’s home in Miles City to attend elementary school, and finally at a rural school at the ranch when more siblings and cousins were of age to attend. The kids also attended the Kinsey school until the older girls were ready for high school. Dan and his brother Leo made a big decision to have a tramway built across the Yellowstone, so the kids could walk to the highway and catch the bus into Terry, only 15 miles away. That decision opened up easier transportation to both Miles City and Terry; before it had been dirt and gravel roads to anywhere.

Daniel was truly a livestock man. He raised sheep, cattle, and registered quarter horses. He spent a good share of his life riding the range on a good horse. He was a conscientious steward of the land. Most of his range land was marginal as it consisted of gumbo badlands. He knew he had to manage the grass usage and have good water sources for the cattle. Most summer days he had his kids and any hired men who were willing to ride a horse gathering cattle and sorting off pairs to trail to parts of the pastures that had good grass. The pastures were huge; natural divides were used to keep cattle spread out. Daniel was a man of few words; anyone riding with him learned quickly that they had to listen to what he told them as it wasn’t repeated—they also learned to be observant of cattle, horses, fences, gates, weather, crops. Dan expected them to take the initiative to make a decision if they ran into a situation. If Dan saw that it was a job well done, he would praise with two short words: “Pretty work!”

The cowboys did stop and help with the haying when they were needed to stack hay. Dan liked to run the swather, but that was the extent of his farming involvement. Over the years he would have from 2-5 hired men to help with haying, riding, chores. He treated everyone who worked with him very well. Even after some of them left for other jobs, they remained good friends. Several families had 2 generations working for him. When the Haughians have family reunions, many of these families still show up; that is a testament to Dan’s character.

Daniel devoted his life to his family and to building up the ranch on Custer Creek. Over the years there were numerous hardships and daunting obstacles to be overcome, but the can-do spirit of a family working together got them through it all. He enjoyed a trip to Ireland and Australia. He was member of the Catholic Church, Knights of Columbus, Terry Roping Club, Montana Farm Bureau, Range Riders, Montana Stockgrowers, and the Wool Growers.

Excerpts from Colliers magazine, August 1952; Fanning the Embers; They Came to Montana