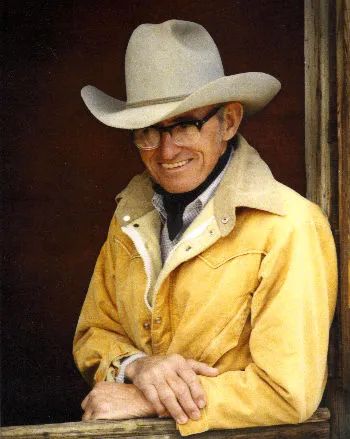 Born in Sheridan, Wyoming February 16, 1929, William James Brown, Jr. was raised in a cattle ranching family in the Gillette and area on Powder River. In 1960, he and his father, W.J. Brown, Sr. sold to Sr.’s partner and moved to central Montana, where the family has ranched just west of Sand Springs, Montana for over 50 years. That ranch that the Browns purchased in western Garfield County was first known as “W.J. Brown and Son”, but the name was later changed to the “LO Cattle Company”, for the LO brand that they branded on the right hip.

Bill and his dad bought their ranch on Calf Creek from Ray Sult, along with the Hartley Lambert Ranch on the middle fork of Lodgepole Creek. Later, in the mid 1960’s they added adjacent ranches purchased from Ray Lufborough and from Harvey Jacobs on the south fork of Lodgepole. In the next four decades Bill leased land on dozens of other ranches from the Fort Belknap Reservation on the Milk River to the Crow Reservation along the Wyoming border. At various times those leases included ranches in the Bull Mountains, the Crow Rock at Cohagen, McCone County, and Powder River east of Miles City and more, closer to the home ranch.

A child of the Great Depression, Bill grew up on the ranch that his dad managed in the remote Powder River country. He attended a one-room school right next to the ranch house, where his sister Betty Jean was the only other regular pupil until they went to high school in Sheridan. Early on, Bill learned to drive a team in the hayfields, and how to work with a big crew. Men were scarce in the war years, so a kid like Bill learned to do a man’s cowboy work early, becoming a good hand at a young age. He was active in FFA in , and entered his first rodeo when he was 19 years old, at the 1948 Johnson County Fair in Buffalo. His long-time neighbor and childhood hero Henry “Housetop” Homrighausen put up the entry fee to enter him in the Calf Roping. Bill took home second-place prize money that day, and such began a life-long love of rodeo and roping.

Bill’s mother Beth was State President of the Wyoming Cowbelles, and it was at her urging that Bill attended the University of Wyoming in Laramie, where he became a student leader in the college of Agriculture. He was President of his Phi Delta Theta Fraternity, and was elected to serve as Student Body President of UW in 1952. Bill rodeoed in college at the of from 1948-1952, and remembers traveling to to meet with thirteen other colleges for the early formation of the National Intercollegiate Rodeo Association.

When he finished college, Bill ranched with his Dad on the home place between Gillette and Sheridan and competed for several years at regional rodeos. In 1953 he won the Championship Saddle as the top Calf Roper for the year in the Northwest Ranch Cowboys Association. He competed in many RCA rodeos, and won several high-profile ten-head Matched Calf Roping’s against some of the best in the sport. He traveled to to attend an early school put on by the great Toots Mansfield, and became friends with the man that he says was instrumental in his being a truly tough roper. In the 1960’s Bill calf roped, and competed in both tie-down and dally team roping in what later became the Northern Rodeo Association.

On September 10, 1955, Bill married Emily Ann Alderson who grew up on her family’s Bones Brothers Ranch on Hanging Woman Creek at Birney, one of the original Montana dude ranches started in the 1920’s by Ann’s father Allen R, “Big Bones”, and her uncle Irving N. “Little Bones” Alderson. Bill and Ann raised four children: Taylor, Martha, Beth Ann, and Reeves, who all attended the one-room school near the ranch on Calf Creek. Bill and Ann encouraged their children to be active in 4-H, FFA, and other youth programs. All four graduated high school at Fergus High in Lewistown, and later from in .

Bill and his dad started with commercial Hereford cattle, then developed a popular line of purebred Beau Donald Hereford bulls that they offered in an annual production sale in Lewistown for nearly 20 years. Bill was one of the first in the state to develop a Simmental herd through artificial insemination, and even imported his own purebred Simmental bull direct from Ireland. Eventually he focused on crossing high-quality Black Angus bulls onto that and Simmental base, and today the herd is one of the most uniform commercial Black Angus herds in the country.

A tremendous ranch horseman, Bill was always an extremely smooth hand, and had a knack for getting the most out of any horse he rode. His original sorrel roping mare “Sue” could work any part of the rodeo sport, but his pride and joy was a chestnut gelding named “Troubles” that his Dad bought off a race track in Arizona, and that Bill trained to be one of the top calf horses of his day. Bill was not mechanically inclined; was never much for ATV’s, hot-shots, or stock dogs; and seemed to believe that any job worth doing was best done on horseback.

In his 40 years of active ranching, Bill was best known as a leader in the Montana cattle industry, a student of range management, and a mentor to a great many young men who aspired to be the kind of top-hand that he was. He loved nothing more than to work a big herd from horseback, or to help a green colt finally learn to duck a cow. Bill especially enjoyed the most difficult cow and horse challenges, like crossing a river, or a four-day trail with a roundup tent and a chuckbox, or working a big new piece of country that he hadn’t leased before, and figuring out how to make it all look easy.

Bill Brown, Jr. served as State President of the Montana Stockgrower’s Association in 1988 and 1989, and was President of the Montana Public Lands Council and the State Grazing Districts. He was proud to be one of the leaders of the Montana Centennial Cattle Drive of 1989, and has been a lifetime supporter of 4-H, FFA, and other youth activities. Bill and his wife Phyllis retired from active ranching and moved to Billings in 2002, where today they live in the West Park Village retirement home.