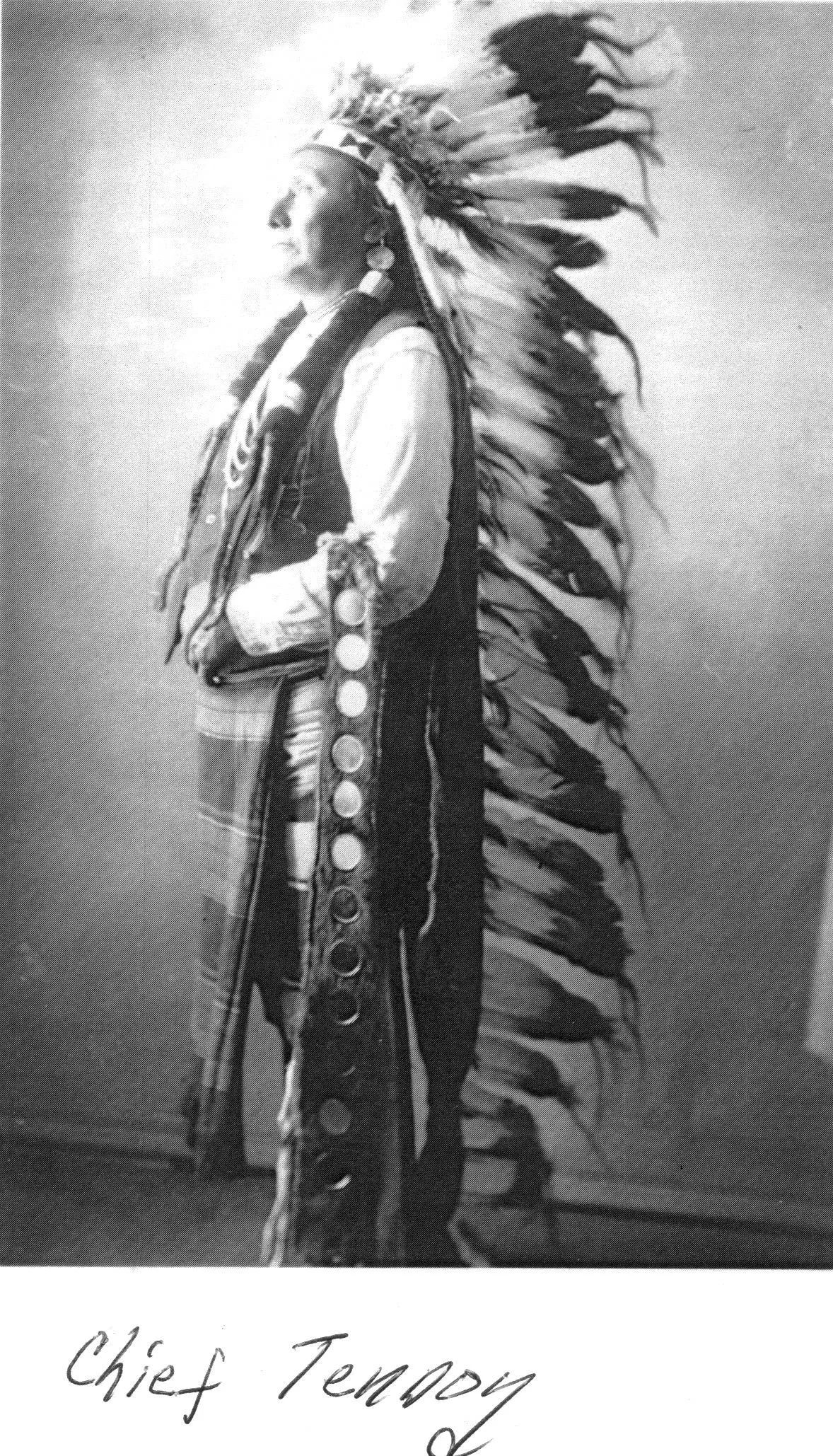 Chief Tendoy (Tin Doi) was born in the Boise River region of what is now the state of Idaho approximately 1834. The son of father Kontakayak (called Tamkahanka by white settlers), a Bannock Shoshone and a Sheep Eater Shoshone mother who was a distant cousin to the mother of Chief Washakie. Tendoy was the nephew of Cameahwait and Sacagawea. Upon the murder of Chief Old Snag by Bannack miners in 1863, Tendoy became chief of the Lemhi Shoshone.

Revered by white settlers as a peacemaker, Chief Tendoy kept members of his tribe from joining other tribes in their war with the whites. He led his people, known as Tendoy's Band, more than 40 years. He was a powerful force in negotiations with the federal government and keeping his tribe on peaceful terms with settlers.

In 1868, with his band of people struggling to survive as miners and settlers advanced upon their traditional hunting, fishing and gathering grounds, Chief Tendoy and eleven fellow Lemhi and Bannock leaders signed a treaty surrendering their tribal lands in exchange for an annual payment by the federal government as well as two townships along the north fork of the Salmon River. The treaty, having never been ratified, forced the tribe to move to a desert reservation known as Fort Hall, created for the Shoshone tribes in 1867. Chief Tendoy refused, expecting what the government had promised. After seven years had passed the Lemhi Valley Indian Reservation was created in 1875, nearly 100 square miles south of present day Salmon, Idaho.

May 4, 1880, Tendoy and a few of his sub-chiefs and a small delegation of leaders among the Fort Hall reservation journeyed to Washington DC where they were coaxed into signing an agreement to move his people from Lemhi Valley to Fort Hall. His people resisted and refused to leave their homeland for another 25 years. Their lands at one time extended from the head of the Big Hole River, Montana Territory to an area northwest of Leesburg, Idaho Territory, southwest of Salmon Falls on the Snake River, to the Tetons, then to the divide between the Gallatin Fork and Yellowstone River and along the divide to Three Forks of the Missouri river and south along the south side of the Jefferson River in Montana. During this time Chief Tendoy and his band spent many months each year in their traditional hunting and fishing grounds along the Beaverhead River near Dillon. Having been granted a $15.00 per month pension and being honored for dealing honestly with the settlers by special act passed in Congress in 1892, Chief Tendoy spent the remaining years of his life between the Beaverhead River in present day Montana and the Salmon River region of present day Idaho.

On May 10, 1907, Chief Tendoy of a mixed band of Shoshone, Bannock and Tukuarika Indians and member of the Bannock, Shoshone and Lemhi delegation to Washington D.C. died while crossing Agency Creek.

A range of mountains in Beaverhead County bears his name in honor of a Chief that wanted peace and prosperity for his people and was a friend to the early white settlers. The Society of Montana Pioneers paid tribute to Tendoy in recognition of his long association with early settlers. The skillfulness with which he had guided his people for 43 years through the labyrinth of Washington indifference, settler hostility and agency neglect, while holding patiently, but firmly to the course he had set for himself and his tribe.