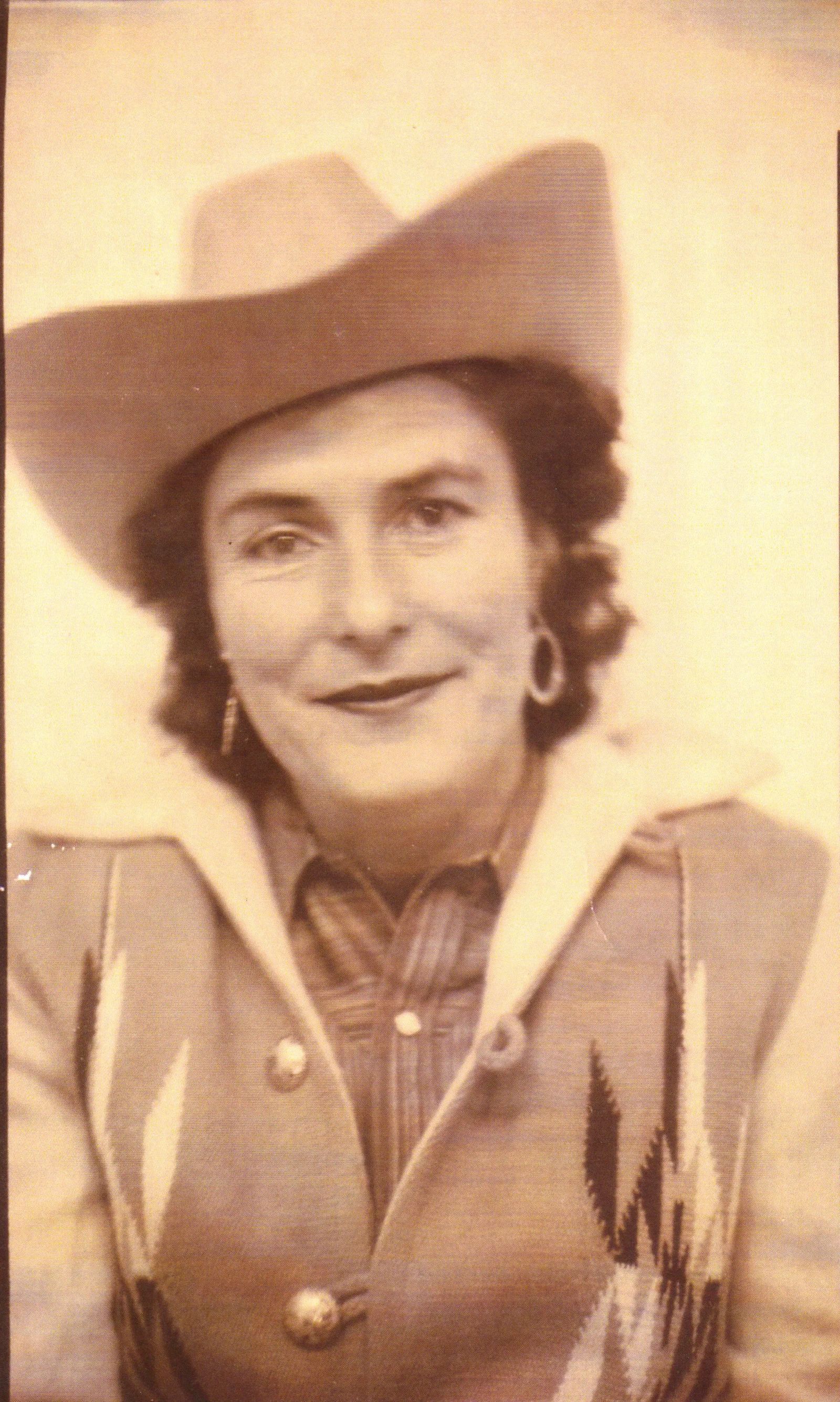 Gertrude Schmidt was born on May 18, 1914, in Butte, Montana to Ferdinand and Johanna (Rudder) Schmidt, immigrants from Germany. The family homesteaded on land in the mountains of southwestern Montana. “Brownie” had two sisters, Johanna and Hilda. She passed away on July 6, 2004, at the Smith ranch at Melrose, Montana.

Brownie was a Montana cowgirl and so much more to many. She married Frank Reynolds when she was 14 years old and had three son; John, Louis and Benny Reynolds. Frank and Brownie divorced and in 1946, she married Donald Smith of Melrose. They had two children; Donna and D. J.

During the late 1940s and 50s, “Don” and Brownie gathered wild horses out of Hell’s Canyon in the Highland Mountains south of Butte. They broke them for saddle horses, sold some and used some on their ranch. During this time they also started raising Quarter Horses and did so for the remainder of their lives.

Brownie’s greatest passion, besides her family, was her horses. She loved training them and was always mounted well. She sat a horse with regal elegance, leaving a lasting impression both visually and spiritually. She enjoyed riding saddle broncs but preferred to ride without hobbled stirrups as was used for lady bronc riders. She mostly rode exhibitions for $25 a ride.

Brownie carried Old Glory for 30 years during the grand entry of the Labor Day Dillon Rodeo. She rode in a side-saddle posse for many years; a memorable vision of her dressed in a long black skirt and jacket, wearing a black hat with a big pink plume. She was the Jaycee Parade Grand Marshal in 1986.

Brownie was a friend, mentor, and neighbor who symbolized the American West with a pioneer spirit. A usual day for her started early with chores, milking cows, cooking breakfast, tidying the house and then off to the hayfield to top out a stack or to the calving sheds to assist a first-calf heifer, or moving cattle, depending on the time of the year. She was a wonderful cook and it didn’t take her long to whip up an enjoyable meal. Brownie was also a seamstress, making the boys their Western shirts and dresses for her daughter. She delighted in folks coming to visit and always had something for them to eat. Brownie was loved, admired and respected by all who knew her. She gathered many friend over the years across Montana and beyond.

Brownie Smith never thought of herself as being special, but she was. Never one to complain, she was humble, sincere, honest, and always thinking of others. She had a beautiful smile and gave the best of hugs that are missed by her family and friends. Even when Brownie was diagnosed with cancer, went through chemotherapy and radiation, twice, she never gave up on living. Always thinking about what she could be doing, should be doing, daily until her passing at 90. Brownie was one tough lady who shared a heart of gold but mostly a true spirited cowgirl to the end.